Camera is way off

I’ve had the same camera & laser for about a month now. I’ve successfully calibrated it before, and it would randomly go out of sync and be off - so I’ve had to re calibrate a few times already.

Now, it’s no where close. I will calibrate the lens, and go through both setup processes for the camera, with overall good scores under 1 (most are under 0.3 or 0.5). Once it’s done though, I line up something on the board, and it’s WAY off. Like inches.

I’m not sure whats going on. Maybe my camera is just garbage? I have a 5mp 100 degree camera from amazon. What’s weird is that when I select STANDARD camera, and I do my test shots, it will warp the edges or completely do a fisheye - even though 100 degrees isn’t really fisheye. In the preview window, everything is straight, but when captured, it warps the edges it seems. Maybe this could be why?

Not sure why it’s SO far off. Makes my camera setup worthless - and it’s worked in the past. Not sure why it will randomly go out of sync and be way off. 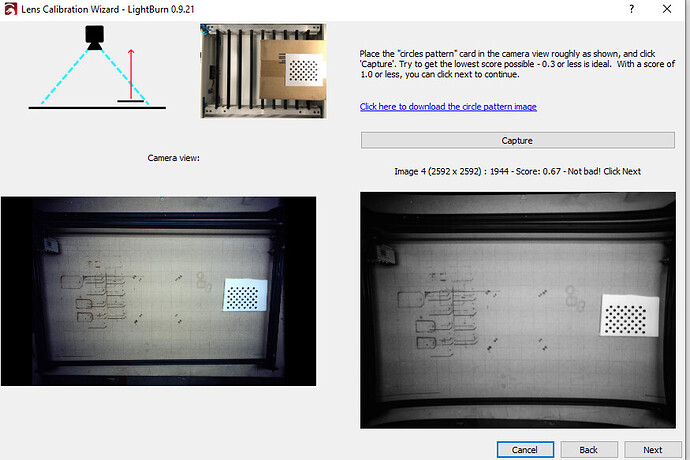 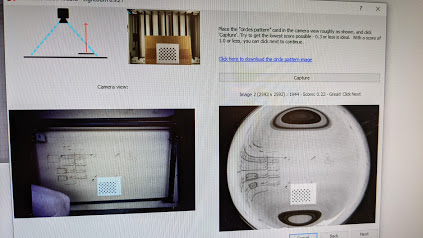 Trying to recalibrate again this morning. This is driving me nuts. Does the camera need to be DIRECTLY above the board? Mine is pretty close, but not directly above. 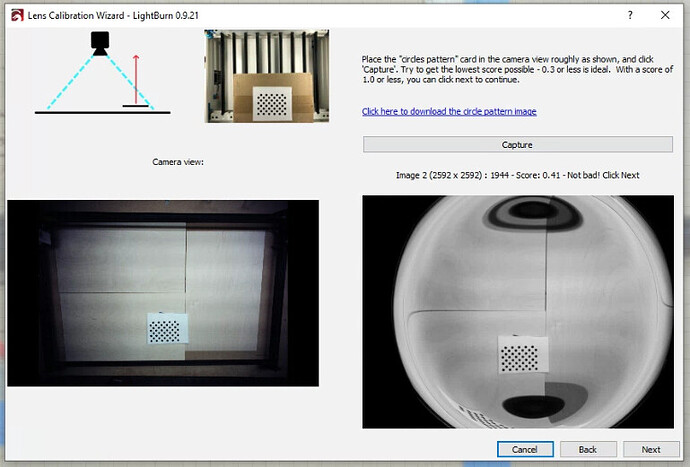 While definately not an expert, or eveen close on this LightBurn visual system in my work I do work with recognition using video feeds and for what its worth I’m going to offer that the clibration card is viewed, way to small by the camera during calibration, if the images you have attached are representative of the calibration process.

What value numbers are you getting during calibration ?.

Now the LightBurn guys may come in and offer a far more informed view, but if you are sat there doing nothing else…whats to lose.

Thanks for your input. I have no easy way of lowering the camera. But I’m guessing I can make the pattern bigger? Just curious how big I should try to make it. Makes sense though, so maybe that can help. I did order the official lightburn camera though, to see if it’s better quality.

Hi Sean, in my opinion those dots are a known size and distance apart and the calibration will go crazy if you were to do that…

I used a box about 3” high and set the pattern on that. It helped, and I was able to calibrate the camera.