Hi, I recently installed a Lightburn camera and at first it seemed to update the overlay fine, but yesterday it started cutting off the top of the image and I’m not sure why. You can see in the attached image on the right is the full bed, then the overlay on the left. 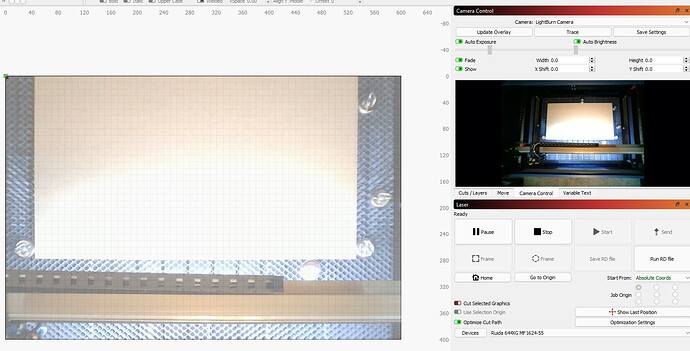 I didn’t think so, but I did replace the struts on the lid with higher quality ones, so maybe it is opening a little more or less that it was initially. Should I just go through the initial camera setup again?

Also, any ETA on when LightBurn bridge will support the camera?

No need to redo the lens calibration, but you’ll likely have to align again - the lid is likely open a little higher than before, and that would absolutely do it.

I don’t have an ETA for the camera support in the bridge. I’m away this week and I’ll be the one integrating it. The camera code on the bridge itself is functional as of yesterday or the day before, so I’m hoping it doesn’t take long to loop it in.

Awesome, I’ll give that a try. Thanks for the quick response.