Camera not lining up

Hey there,
I’m relatively new to lightburn and engraving in general.

I have set up a camera (aluratek 4K) and gone through and calibrated the lens and alignment. When I place relatively short objects in, everything lines up perfect. I have been trying to get my system set up for engraving a gun and the point of the laser isn’t matching up with the image on my screen. I can adjust the image using the x/y shift to get it on spot with one side of the gun but once I try to make sure the opposite side is on point but it’s +/- 10mm off the x and y axis. 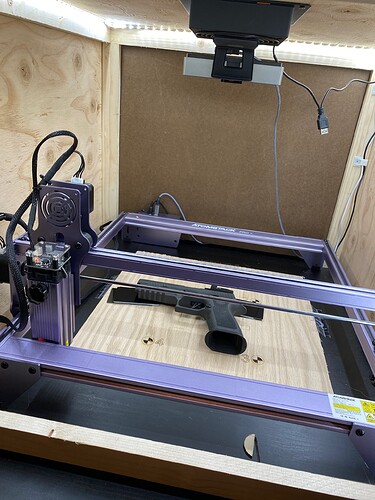 I’ve also tried adjusting the width and height of the image under camera control.

I cannot seem to figure this out. 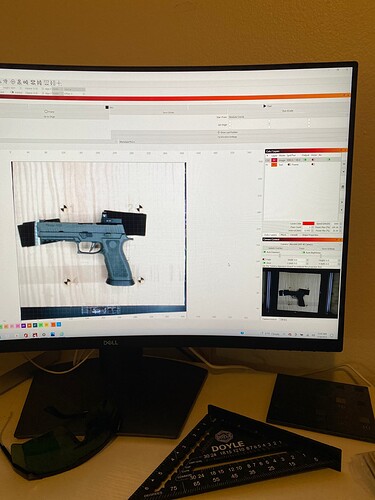 I’m having a difficult time following some of what you’re saying. But it sounds like you may be trying to use the camera alignment process to align for this particular job. Is that right?

Camera alignment is meant to be a one time process that’s part of the 2-step process to configure a camera for your laser. Step 1 is calibration which is only about learning about your specific camera and how to correct for lens distortion. Step 2 is about taking that calibrated camera and now aligning the image created with it to specific location in space with relation to your laser.

Once done, you needn’t do that again.

Have you seen this video about the camera setup process and an example usage?
LightBurn Camera Setup - YouTube

Here’s also a reference to the documentation:
Using a Camera - LightBurn Software Documentation

I’m assuming you don’t have a moving Z axis? As in the “bed” goes up and down.
The camera system relies on a fixed distance between the camera and the focal point of your laser. But the item you are engraving has added ~25mm to that thickness, compared to where you calibrated on the work surface. Since your camera calibration is done to the work surface and not the surface of the part you are engraving, that calibration will now be off. And, as you’ve seen, it’s very sensitive.
Your only option is to calibrate to the new Z spacing (between part and camera) or have a movable bed so that you can always move the part to be engraved to the same Z spacing, instead of refocusing your laser.
Short version: if you are relying of changing the focus distance on your laser the camera calibration will not work.