Can I get shades of gray by laser power?

Hello!
Is it possible to get different shades of gray when burning a photo on wood, by varying the laser power, instead of just “printing” dots?

Simple answer is no…

You can vary the depth on a co2 by using the grayscale option.

However a laser is pretty much like a printing press, one color which is black or ‘damaged’ by the laser…

Whenever I see the words:

Simple answer is no…

It solidly implies that there is a complex answer that is more than likely yes.

Wood is tricky because different parts of the grain can be more (or less) susceptible to laser marking, making streaks in the final image.

If you were to run a material test and develop a setting for the lightest color that you wanted. Then produce a large rectangle of just that light color, you could then repeat the test pattern on that and you might get a second or third shade you like before you get to charcoal.

This will vary with wood (from piece-to-piece), species and humidity. It will be a challenge to get subtle variation in an intentional repeatable way.

Wood is tricky because different parts of the grain can be more (or less) susceptible to laser marking, making streaks in the final image.

Strictly - pretty much any diode laser is (mostly) linear and can expose proportionally to desired shade. But non-uniformity of wood is a huge variable, even on the same board. Not only mapping bright and dark, but gamma/linearity is another huge variable. Currently I’m not aware of tool to control M4 mode Gamma. Maybe it should be part of standard tools?
Alternatively, gamma can be preprocessed in another tool, before dripping image into laser tool. Non-uniformity still a problem.

Here is an idea to explore: pretreat wood with solution that produces more linear gamma. Maybe sugar water? Dried of course.
Got this idea while playing with test card board that came with JL1. I was able to get pretty nice and continuous shades for the photo with M4. It does not behave like any other cardboard. It got to be treated with something.

But dithering is certainly simpler and more robust way to get gray shades perception.

How do you get any kind of linear control with a signal that is either on or off?

If it’s for a Diode LED then do some looking around on the JTPhotonics site.

Jack,
I guess there i no new exiting posts that you decided to revisit such old one:

Most laser diode drivers have integrator/low pass filter, that in turn creates proportional control for laser diode. Similar to cooling fan drivers, most will take PWM rather than proportional voltage.
Laser diode is Current_Mode device, with forward voltage mostly plateaued.
Most engraving solid state laser heads will integrate PWM to proportional voltage and use it to control laser power (current).
If it would be only pulsed at 100% - there will be very different physical effects. I mean total dissipated energy would stay the same, but short peak power will produce different effect than continuous at the same integral.

With laser, the limitation is the cutoff frequency/time constant. Old common frequency is 1KHz, this was limitation of ATMega328P - the original GRBL MCU. STM32 default is 5KHz. FluidNC can go even higher.
So original F is at the edge. Some math: My JL1 set max velocity to 3000mm/min, that is 50mm/sec. With spot size of 0.1mm the dwell time at the spot is 1/500 of sec, which is nicely aligned with Nyquist criteria for 1KHz PWM.
Above are very conservative numbers. Realistically I do not think many folks can reliably focus to 0.1mm and practical velocity of the diode lasers to burn anything practical is below 3000mm/min, so there is more margin on integrator riming, sharpness of the filter and other aspects of it.

No filter is perfect and this is also a limitation on max velocity, that with increased laser power may become a limiting factor. with ever increasing power and speed, I believe solid state laser manufacturers now expecting higher PWM frequency, thus shifting cutoff frequency of integrator higher. That may resulted in mismatch between controller box capability+settings and faster and more powerful lasers. I believe, pretty certain, this is a cause of number of posts with reports of moire patterns over larger fills. There controller frequency just to low for huger performing lasers. Anecdotally one case confirmed solution as using cheaper, I guess slower laser.

Going back: if you are running strictly pulsed mode - as long as pulse length is longer than time constant of the integrator - it will be the pulse laser. Shorter pulse length will be converted by integrator to proportional control of laser power.

A laser, at least all of them I know of, lase at a certain current. You can not lase at 50%, tube or laser diode. Just like you can’t lower the voltage to get a control led brightness, they are off or on.

If there is any linear control it is very narrow. If we could change the led linearly like this we could produce an almost perfect gray scale with literally an infinite range from black to white, just like a photo…

How do you get a led to illuminate at .5V?

If you could run fast enough with an led, you can see it…

At least that’s my belief.

How do you get a led to illuminate at .5V?

This is out of context but anyway: Applying it as forward voltage will not light up the LED. However with LED current control circuit that can control current with voltage, it is trivial to use 0.5V as input to current control circuit.
I’ve mentioned above that laser diodes, just like LEDs, have forward voltage after voltage saturation point mostly plateaued. You need to reach that voltage saturation point then pump enough current for oscillation to start, to get enough gain. The light output will be function of current, with voltage mostly flat.

It takes minimum energy to get laser to start excitation to persistent oscillation. However your statement:

… is not true. I do not answer for CO2, but solid state, while it has minimum, it is not 50% and most of the rage is continuous and monotonous.
Here is one article from reputable source. I’m sure the is more.
Maybe you are misinterpreting that diode have to draw ~50% of power before started to emit the light? then I would agreed. But it is not suddenly ignites at 50% brightness like gas laser.

From plot below, it is clearly possible to drive laser diodes to very low light output. 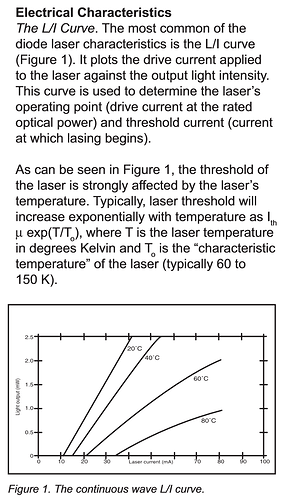 A laser, at least all of them I know of, lase at a certain current.

For solid state it does not mean that they ignite at 50% luminous output. They may start to emit at that level, but at that point light output is minimal, not the same 50% as input power.

I’ll check it out…