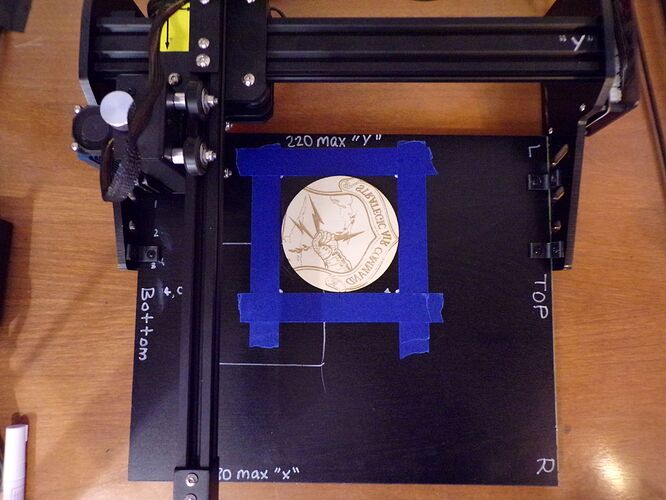 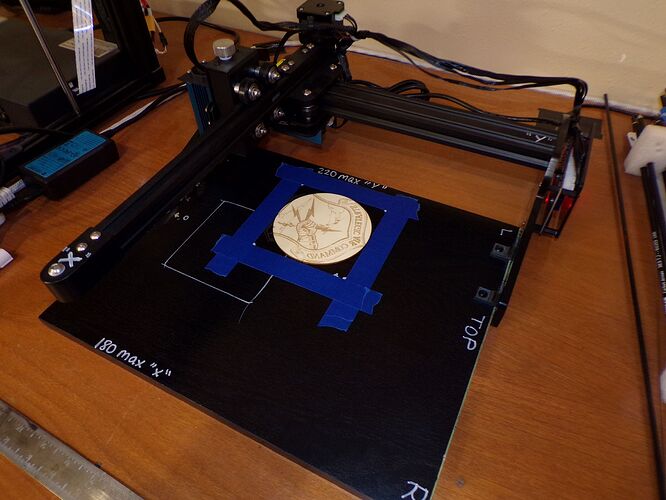 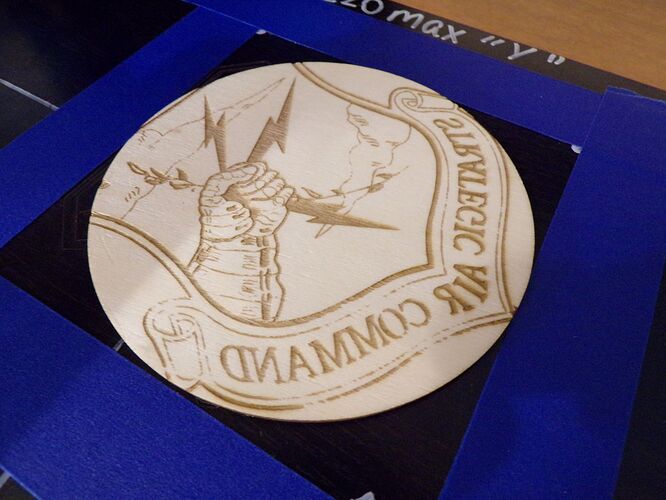 I come from 3d-printing, so it seems natural for me to want 0,0 to be home. And yet, from what I can figure out, this thing homes to 0, 220.
Can I invert the “y” axis so that home is 0,0? Is that even going to help me, because you can see where lightburn thinks the “Top” and “Bottom” are.
I’m confused about what it is looking for. Image preview shows that this coaster should burn normal, but it actually burned mirrored.
So I know that my Origin is wrong in settings. Starting at “Home”, I burned dots on the jig board every 1", to try and figure out where to place a coaster to make it burn centered on the coaster. Changing the Origin probably won’t affect that, though, will it? Dang it. Seems so confusing.

A few questions for you:

Can you take these actions and report back?

hello, for me you must modify the direction on the X or Y axis and change the start/ home angle

Hello! Thank you for responding! No, the laser is at its “Home” position in the photos, so the “L” for left wasn’t home.
I got it to work correctly with the markings that I’ve already made on my jig board by just editing the device and changing the origin back to “front left”. I had it set to “rear left” before, which I thought was correct since that’s where “Home” is. You are correct in that it doesn’t matter where home is, origin matters, and I ended up setting it back to where it wanted to be.
Now the image is correct. What’s strange to me is that, unlike a 3d-printer, the laser world doesn’t seem to have device “front” or “rear”. You can arrange it any way you like, but that doesn’t help beginners when it’s not specified by a manufacturer.
And, I did think about reversing the "Y’ axis to make home at 0,0; however in the end, it doesn’t matter.
Thank you to all who responded! It’s working fine now, and with the markings that I have made, I now know how to orient my substrate material to be sure it’s going to burn exactly where I want. Very important on round items with a burned ring near the perimeter, but not actually to it.
D.

Oh, one more thing, yes, I did re-scale my image to make it fit the coaster

Sounds like you’re in a good place now but I’m wondering if there are still a few oddities going on. I think some of the confusion is due to the orientation of the machine.

If we assume for the moment that the machine is intended to be rotated counterclockwise 90 degrees, that would put home at front-left if I’ve interpreted correctly what you’ve stated. For laser machines that home front-left, origin is almost universally front left. Is that not the case for you? You mentioned earlier that it shows 0,220 which I find unusual and is likely but not certainly not how it’s supposed to work.

If you’re willing, we can explore this to confirm. Your call.

If so, keeping in mind that I’m referring to orientation with machine 90 degrees can you complete the previously mentioned steps? I’ve modified knowing now that home is lower-left.

What’s strange to me is that, unlike a 3d-printer, the laser world doesn’t seem to have device “front” or “rear”. You can arrange it any way you like, but that doesn’t help beginners when it’s not specified by a manufacturer.

This is honestly a bit annoying and manufacturers really should be more candid about this. The reality is that they really only care that they can get the software they care about working and nothing more.