Openbuild lead 1010 with Jtech 4.2 laser not connecting. I get a message that it is waiting for connection. also the system does not find my Jtech Laser.

The JTech laser doesn’t talk to LightBurn, the controller does, and LightBurn talks to the controller. What controller do you have running your machine? I don’t know what “Openbuild Lead 1010” is - does it run GRBL? Knowing what OS you have would help too.

It runs GRBL the controller is a Spark V3. OS is windows 10- 64. Openbuild is an CNC machine.

Did you choose a COM port where it says “(Choose)” here?: 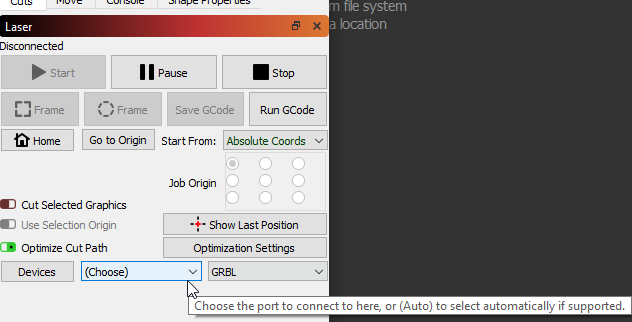 I do not get an option.

Does it say GRBL in the box beside that?

If it does say GRBL there, then your computer isn’t recognizing the controller as a USB device, meaning you’re likely missing a driver.

If it doesn’t say that, then you haven’t configured a device yet and would need to do so. Click the Devices button, then “Find my Laser”. If that doesn’t find anything, you might still need a device driver.

It does say GRBL. When I ask it to find laser it does not find anything.

Can you post a screen shot of your laser window, where it says GRBL and the box to the left of that? (basically your version of what I posted above) You aren’t describing things with much detail, and I can’t see your screen, so this will get us there faster.

I can later. I have to go get my granddaughter.

The screen shot requested. Thanks for your assistance.

So, where it says “(Choose)” - if you click that, do you get any options for COM ports to choose from?

Then your laser controller is not recognized by your computer, which means you likely need to install a driver. I would contact whoever you purchased it from to get that sorted.

I will do just that. Thanks.

OB stands for Open Builds a maker community in the US good for Acro lasers frames and OB/OX cnc machines, Lead 1010 means its driven by lead screws instead of belts and its 1000mm by 1000mm

You will come across a lot more now in the future especially as OB have now released their super new Black Box Controller.

This is a full GRBL controller and will control, lasers, CNC, plasma, & 3d printers, OB make all these machines and The Black Box is their latest and newest controller, I have mine sitting on the dining room table awaiting assembly. Its a great piece of kit and also has onboard relays and supports external triggered 110 and 240 volt relays. Also great drivers for Steppers.

I believe they are hoping to move away from separate driver units for cnc systems although this is only a 3 axis unit in its first version. It does work extremely well and I’m hoping to hang a Endurance 10 watt plus off it soon on my Leadscrew 1075 mill so that would be 1000mm by 750mm driven by screws rather than belts and I have a VFD water cooled spindle on mine( laser is going to only be used when necessary and not left on the gantry when not used)

Belts are still an option but not on the original UK Workbee CNC now.

You should be starting to see a lot more of these soon as the Acro system they use for lasers is a lovely rig and easily made to any size almost, combine that with the BB controller and a good laser and your away.

Here is a link to the BB manual and Full Specs and detailed drawings of the circuit boards for future reference, basically anyone now with a new Workbee CNC or Openbuilds Lead or OX or C-Beam, Sphinx Mini Mill and Acro Laser Gantry will probably be using one of these, just so you know what you’re in for…