I have designed a custom monogram for a friend’s wedding. I want to cut the attached design out for her cake topper. I want the details of the design to be engraved and the entire monogram cut out, including the inside pieces. How do I tell the software to process the areas differently? 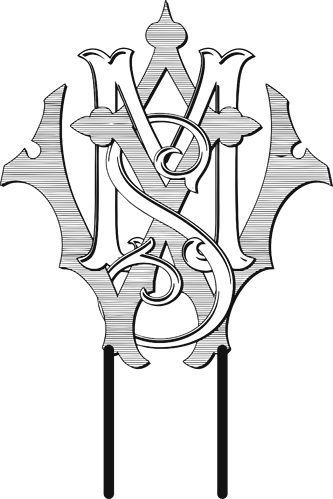 Separate the individual components of your design. The best method of separation would be to assign a layer to each characteristic. Important: Put the engraving layers above the cutting layers, to avoid having the design cut, falling out, and then mis-aligning the engraving portion!

You’ve not specified in which program you created the design, but it isn’t critical, as you can accomplish the layer assignments within Lightburn as needed.

Each engraved object should be a closed path. For example, the top curve of the M has four smaller curved objects within. Each of those would be on the engraving layer. That particular layer would also have the assignment of a more dense engraving pattern, while the striated background portion would have a different pattern and should be assigned to a different engraving layer.

It may be necessary to duplicate some edges/shapes in order to have closed objects for engraving and to have unique lines for cutting.

If you have additional questions, try to be as specific as possible.

Answering this will depend on the format of the original artwork. If you can export from the origin software as vectors (.ai, .pdf, .hpgl, .plt, .rd, .svg, .lbrn format), you can import this into LightBurn, un-group and then select desired component(s), then select a layer color from the palette on the bottom to assign it to a particular layer. Double-click that layer in the ‘Cuts’ window to adjust the cut settings for that layer.

Note: LightBurn recently re-named “Cut, Scan and Scan+Cut” to “Line, Fill and Fill+Line” for new-user clarity. Some training content and documentation has yet to be edited, but we are working to get them all updated.

If the artwork is a bitmap image, you can use the ‘Image Trace’ feature to provide outlines for further processing. You will need to ungroup the results to edit away unwanted duplicates to just get your outline cuts, so this is a little more involved.

General usage resources can be found in the post below and there is a LightBurn youtube channel with additional tutorials to help. As @fred_dot_u asked, specifics when asking a follow on questions will help you get detailed instructions to accomplish a specific task.

I jumped the gun on a few things in the original question. As noted, “I’ve designed a custom monogram…” made me think that it was done with a vector editor such as Inkscape or Illustrator. It’s hard for me to fathom someone creating such an intricate design with a bitmap editor. Perhaps we’ll hear again with more information to make the solution that much easier.