Cubiio 2 and Lightburn in other languages

I just got my first laser engraver/cutter on a kickstarter fulfillment. It’s a slim-profile 5 watt diode laser device run over wifi called a Cubiio 2. Their software is still pretty rudimentary and we’ve got many frustrated users on our Facebook groups. We discovered LightBurn yesterday, and even though it requires some minor improvisation we are quickly finding it’s hands down the best way to work with the Cubiio. If Cubiio 2 could be added as a supported device for lightburn it would be spectacular. Right now I’m just feeding GRBL g-code to my machine through a web-form as text files.

There are a couple thousand Cubiio users, many of us newbies, who would probably love Lightburn. I believe that a majority of our user base are Chinese speakers. Is there any way to get other localizations/languages for Lightburn.

At this time, all the GCode controllers that we support have a USB port and are driven from a computer running LightBurn over the USB Cable. Does this machine have a USB Port and can it be controlled in that manner?

It doesn’t have a USB port, it connects via Wifi. If it were possible to connect to it in a future version of software it would be great. 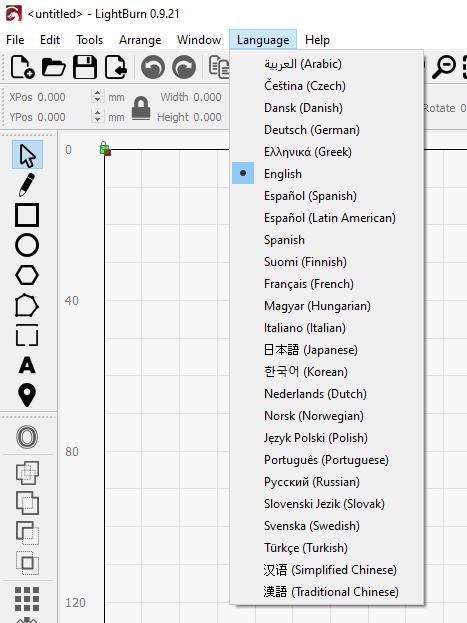 Some of these are not in the current release, but Simplified Chinese is among those already released. I might have to get my hands on a Cubiio just to see if I can figure out what the protocol is and how to communicate with it. Altering the GCode generation to support different machines isn’t too hard, but doing the live control takes some effort.

Languages in the languages menu eh? Well I feel silly.
The G-code that it kicks out for GRBL seems to work with two caveats: the bounds listed in comments aren’t correct, and the home location is complicated.
Cubio works with x 0 - 297 and Y 0-215. (approximately A4 sized)
The rest location of the Cubiio laser diode is in the top right (at aproximatelly x>300 y>215) while the origin for cuts is 0,0 in the bottom left.
I also haven’t figured out how to get the focus test to work adequately, I can send the machine g-code to print the pattern but can’t yet figure out how to interpret the output.

Does Cubiio have a moving Z axis? If not, the focus test wouldn’t work. It draws a bunch of lines at different Z heights, and the thinnest one is where the best focus is.