Hi I m new to light burn and do like the software a lot .
Unfortunately I’m facing a problem with deviations on multiple cycles for the same element to engrave / cut. (On 3d printers it would be called layer shifts…)

I have checked the belts, motors hardware etc. When cutting a simple circle or square things are fine.
When cutting some Christmas decorations I have a shift only on the x axis.

As the structure is rather complex I m afraid it might be some rounding issues on the hardware ? All things on mechanics I think I have checked

but I don’t have a clue what’s on)
As the two different tries may confuse I uploaded the picture with some markings: red and green are the different tries 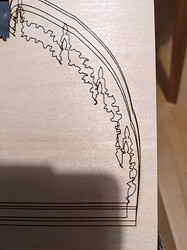 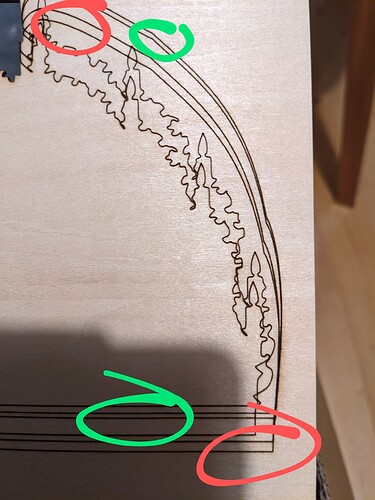 How were these multiple passes achieved?

Were these all passes done at the same time through layer setting? Or these were done manually, with you pressing Start multiple times? Please be as specific as possible and anything you might have done in between passes.

Sorry for not being as precise as needed.
Yeah did it using the layer settings and with most parts of this project it works fine. Only this one (a rather long line) ends up in a mess

You’ll typically see requests for a lot of information and context just because the number of unique situations and variables that affect outcomes is really quite high.

The situation you’re describing is really strange to me. You’re saying that you’ve done multiple parts of this project in the exact same way, with multiples pass jobs. And it’s only this one that’s showing this issue? That’s highly unusual.

Is there something unique about this particular part? Was the design done differently? Is it unusually big or reaching parts of the laser frame not normally used? Do you hear anything unusual for this part?

And to confirm, you’ve since run another job after this one that does work correctly?

Are you able to share the .lbrn file? I don’t think it likely there’s a problem there but might be worth looking at, especially if you’re saying it’s unique to this part.

The only thing i can say is… Check for stepmm of X and Y, and if you have a 3d printer you know what i mean

hi thanks for the answers,

@killrob well calibration is fine (and should from my view on it end in reproducable deviation from the size but not in shifting between the passes), but thanks for giving an impulse for solving the problem

@berainlb unfortunetately i can’t pass the file, as I’m not the owner of the drawing included, only user :(. whatching the gcode in a gcode visualizer looks ok.

and as changing the way of producing it it changed the error from X axis to Y axis.
Yes other parts of this file are produced correctly. the difference is: in this parts there are many changes of direction, as to be seen in the section in the fotos) and the part is larges one (about 900 mm of engraving /cutting with 3 passes thus 2700 in totalfor all passes - which is about 25% of the “picture”). Thus I more and more think it might be some inprecise calculation in the grbl 1.1h firmware.

Is there a way to cut a line in light burn in to multiple pieces?

While possible, I tend to not think this is any sort of imprecision issue. I tend to think this is something mechanical or setting related. I’m wondering if somehow the burned area is larger than the actual frame dimensions and the laser is bumping into those limits and losing steps for each pass. I would expect there to be a grinding noise or something to indicate this.

As for cutting a line in LightBurn there are multiple ways to handle this but I would suggest looking at the Cut Shapes tool:
Cut Shapes Tool - LightBurn Software Documentation

I’m not an expert since I don’t even own a laser cutter yet (I’m building one at the moment). But what I would do is try to cut it at a lower speed. Maybe your motor misses steps because it’s going too fast or the driver is overheating due to the duration of the job.

Also make sure your work piece is kept in place (for example by magnets). Maybe it’s shifting caused by vibrations?

ok I think I finally sorted out the problem:
It seems to be the 2.4 screen with offline capabilities.

to be fair and open: It’s not 100% safe by now, as I didn’t laser the picture for the testings anymore but CNC plotted it by fixing a Pen to the laser. BUT things sort out to be reproducable.

When engraving not from SD Card (several tried) but directly via lightburn and notebook it looks ok; when splitting the line in Lightburn [found the option :)] into 5 parts offline processing looks ok as well. (only ok as the Pen is only attachted to the laserhead with a quick and dirty printed holder and some bungee cors, thus it moves very slightly)

Well when having time I’ll try the next “real” test with laser on [as I dont want to burn wood for about an hour indoors - even with carbon filters]. Thanks to you all.

can finally confirm the problem resolves when either cutting long paths into smaller sections or engraving directly, thus it should be a bug with the tft24 offline capabilties. not too sure what happens in details but might be s.th. like roundings when having many small direction changes [what somehow doesn’t fit as in most situations things like this should compensate themselfs].

so thanks to the all of you for helping.