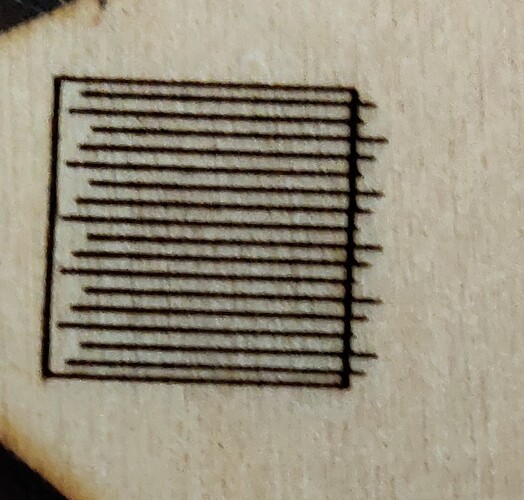 This is worth review: Scanning Offset Adjustment - LightBurn Software Documentation

When i did see IT the first time i wanted to do this. But isnt this just to fix the shift from bi-directional lines? The picture is from lines from a single direction.

I did try it and i gives the same result. Becouse alle the lines are in the same direction. And the patern is evert time the same.

What firmware are you running on the board? If it’s Marlin, that’s likely the problem - it’s a relatively terrible choice for lasers at the moment. It’s improving, but when compiled for 3D printing, there’s a few things they do to the fan outputs to reduce power surges when the fans turn on, and that makes them unsuitable for use with lasers. You’d have to figure out how to recompile your firmware with the fan soft start disabled and the PWM output updated more often - I think the default is 10hz, and it needs to be at least 1000hz.

SOLVED taken from v1engeneers forum: I will summarize the problem. The more recent versions of Marlin the code that updates the settings for the fan was changed. The change caused it to delay the fan updates. Since many of us use the fan to control our lasers that change causes the laser to turn on and off to early or too late. As you can see in your photo and in the photos in the other Thread BT pointed you to. Here is the offending code. It is located in the Marlin.cpp file. // Limit check…

I looks like that be the problem. I will test it and make IT solved if it works.