Distorted Image Sends Wonky From One Laptop, Works Perfect on Another

I apologize to start, I’m new with the technical speak, but will try to be as descriptive as I can. I am running Lightburn v.1.0.06 on a Windows 10 HP Pavilion 15. I connect to the machine (Rabbit SD-60-6040, Ruida 644XG controller) via USB. The design file appears fine in Lightburn, but the image sent to the machine ends up missing pieces and adding lines in wrong places. It has to be a setting on my laptop because if I put the file on a flash drive and transfer it to my sister-in-law’s laptop (a slightly older HP Pavilion running an earlier version of Lightburn, 0.9.19, it has no issues sending a clear image. I have matched my settings and device settings to her laptop. Machine settings work fine for her so, I don’t even want to mess with that. I can send it 5 different times, and end up with 5 different messed up images, but ever once in a while I’ll get lucky and it will send correctly. I’ve tried updates, I’ve tried uninstalling and reinstalling, I’ve tried previous versions, I’ve tried saving as a .lbrn2 file (default) or .lbrn legacy file (this is what my sister’s laptop runs, the older version of Lightburn can’t open lbrn2 files. Ideas for what to try next? Screenshot shows file in lightburn, photo is dark but shows screw ups on the laser screen, circled in red so you don’t have to hunt for differences. 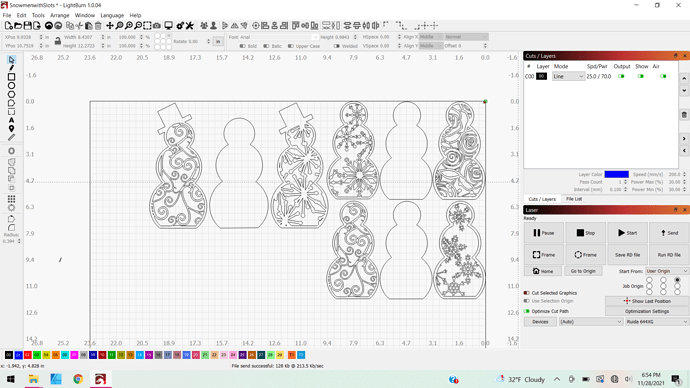 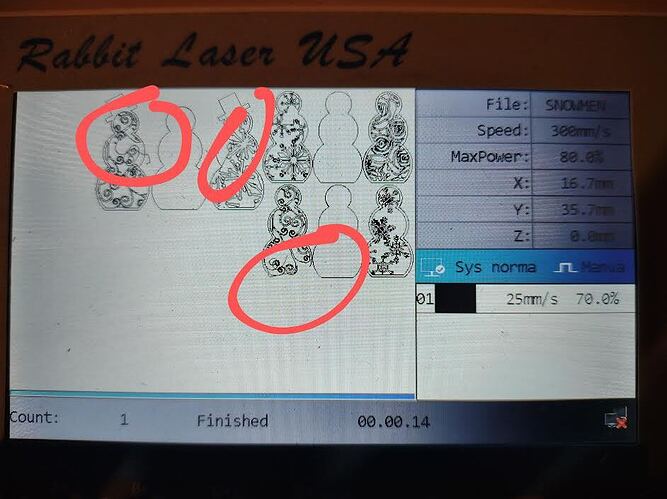 This one is a bit odd. Let me ask some clarifying questions.

Are you able to share the .lbrn2 file here? There maybe something in the design that’s complicating things.

I’ll try something in RDWorks (which is so horribly user-unfriendly) to see if it’s the laptop, or program. I’m going to try to install Lightburn on my Surface tablet in the morning, and try it as well.

Okay, thank you for the thorough response and working through every question.

All of what you’ve said is indicating to me that there’s an interface issue with your computer and the Ruida controller. Probably something on your specific computer since it works with your sister’s.

If you do get LB installed on the Surface I bet things will work.

Similarly, I don’t think it’s a problem with your LB installation because of a few things:

I’m going to suggest a handful of other things for you to try to confirm this later on.

As for the primary issue I suspect a problem with your USB port. I assume you’re using the same cable that your sister uses? If so, the cable is likely fine. If not, could also be a cable issue.

4 and 5 assume that you can definitively prove it’s a problem with the USB connection which step 3 should tell you.

So, I sent a 2 layer file (road map with river, pulled from Google maps) that I created. Final product at the bottom. Sent the road part first, worked perfectly. Sent the river part second, appeared on the laser as a line (see photo), error froze the machine. Communication error when selecting file, froze completely, repeatedly. Couldn’t select files to run, couldn’t delete files from the machine or from the computer. It was stuck on the river file, and I couldn’t press buttons to run/delete/anything. Error timeout prompted press esc, and then would start the cycle all over. (Timeout, that problem solved itself below) 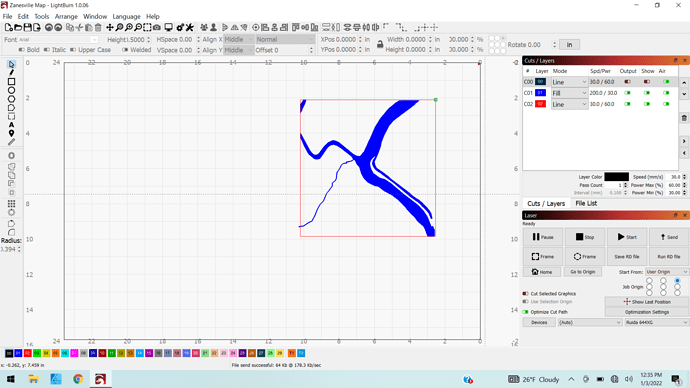 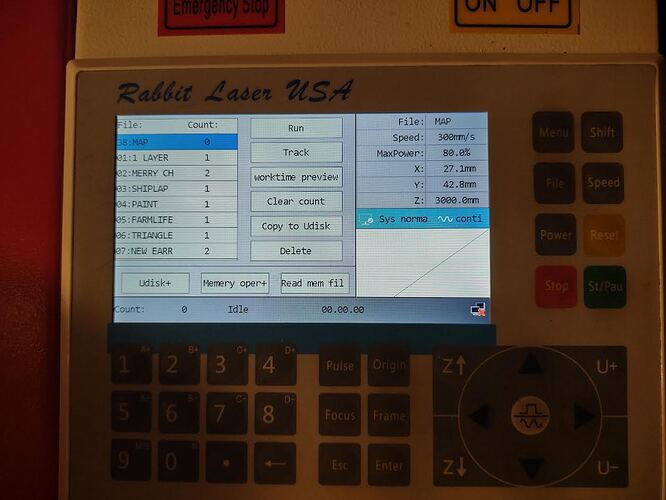 Thanks for the help! Happy New Year!

So it sounds like you’re back in business but with no absolute clarity on why. I do know that Ruida controllers can exhibit strange issues when its storage spaces gets low. Could have been the issue here. Not sure why it didn’t affect your sister’s computer though. If she was using the play button vs send that could make a difference.

Ethernet connection doesn’t use Internet so you’re covered in that scenario. The hotspot situation sounds like its own little adventure.

Good luck with this. Hope no more issues but circle back if you have something to share.