Dots around engraving - any updates

I’ve searched through other topics and found many of the same - dots around engraving. It was “blamed” on electrical power supplies, reflections off materials, etc. The only thing that has changed on my laser is the controller and Lightburn, whereas I was previously using K40 whisperer.
These dots have NEVER appeared previously, but now have appeared next to engraving.

Does anyone have any updates for a fix on these? Unfortunately all the previous topics were auto closed after 30 days prior to people getting a chance to reply to them.
The main change and common theme for these is lightburn, so def something software/bug related.
File is a black and white SVG, no dithering, doesn’t appear in preview. 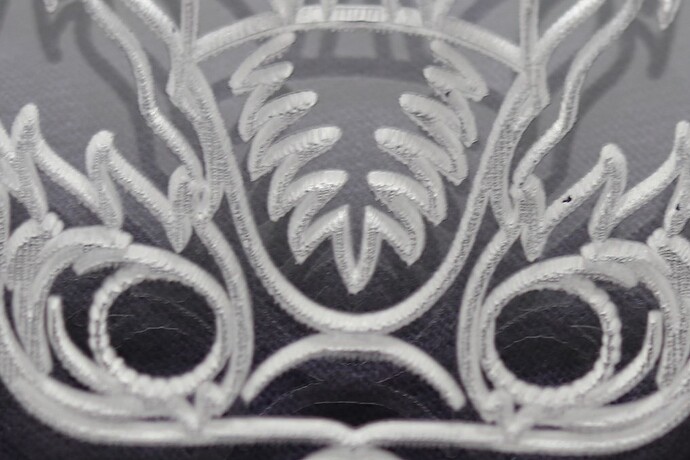 Here are two examples, one without the dots, one with

so def something software/bug related.

Have you read if others have the same problem?

so def something software/bug related

I’m curious how you arrived at this conclusion, especially since you’re not seeing anything in preview. Do you see the laser moving to the dots and burning the holes?

The controller is a significant change to your setup. Any replacement board for K40s is typically going to be doing a lot more of the processing work than the original board. Changes in behavior for things like acceleration are the result of the controller.

Just to cover all the bases, have you made any changes to air assist or the actual material that you’re using? Those can both affect the appearnce of tyes types of artifacts.

My guess based on the pictures is that you’re going to need to change cut settings. Lower power and possibly lower speeds.

Yes have read others having the same issue. If you search for “dots engraving” quite a few come up.

To answer the other questions:
No changes to air assist
no changes to material
no changes to heights etc
Power/speeds shouldn’t make a diff as the same power & speed have been used previously.

Here’s the weird thing - it sometimes does it, sometimes doesn’t. But varies all over the piece, so it’s not for the entire engraving portion.

Yes, search for “dots engraving” a lot of topics come up.

Yes now I can remember the long discussion that has been up here before. It is a pity that no solution has been found. I meant it was water in compressor air or reflections … which it was not. But it is strange that it hits so individually and can not be transferred from machine A to machine B.

Maybe I’m looking at the wrong ‘dots’ but it looks like fine bubbles in the glass.

It does look like small bubbles. I would split the unknowns in half.

Run the job a second time if the materials aren’t prohibitively expensive and see if the dots show up in the same places - it could be related to material and if it’s random - the dots will not be placed identically.

You are welcome to upload your lightburn file if you’re willing and able to share it.

Power/speeds shouldn’t make a diff as the same power & speed have been used previously.

Power/speeds will not translate directly from your previous setup. The controller itself is likely literally able to go faster than your previous one. The specified power and speed settings are not absolute. They are basically requests and rely on processing speed and physics to attempt to match requested speed/power. There are also acceleration settings on the controller that are almost certainly different than what existed prevously.

If you’re experimentally inclined, try taking a high speed video of the engraving using the current process vs the previous process. You should be able to measure the differences in behavior and should be able to observe the formation of any occlusions as they happen.

Since they look like small bubbles, I’m wondering if they are in fact laser created.

They do not look like ‘shattered’ glass, or like any part of the engraving the laser did damage. The only option with glass is to shatter it.

The material is acrylic and have engraved literally a few hundred units prior to this and not had the issue before.
Unfortunately yes, 2 variables have changed, the control board (mini GRBL) & lightburn.
These are the other topics that have come up with the same issue, but unfortunately no resolution:
This one has the most info - Dots appear all around engraving - #17 by Julien
Phantom dots engraving with Lightburn
Engraving disturbance littles dots - #7 by Julien
Little dots after engraving - #3 by EEVasquez
Random Dots When Engraving

So the ‘bubbles’ or dots are random. I’ve ran multiple jobs straight after, and it does randomise. The photos in the example, the dots came out first, then job ran a second time and didn’t come up. No changes to settings at all.

The reason I’m ruling out interference is that I hadn’t had this issue before with all the wiring, stock k40 wiring is all over the place anyway, but re-grounded everything when I first got the unit. Other people have ruled out interference as well with shielded wiring etc.

The best explanation for this is that for some reason the laser is being told to ‘fire’ for the tiniest amount.

There is a test I want to run, I’ve noticed that with fine engraving it’s a bit more obvious whereas thicker stuff it’s not. So going to try a simple test file to see what happens.

It appeared to be glass from the looks of the pictures. I get much more smooth engraving in acrylic.

If it is being told to fire by the software, you should see it in the preview as it would be there. Might have to zoom in.

If in fact you are correct, and it’s random it would pretty much point towards hardware.

Ok so just posting an update here for anyone else who is having a similar issue.
This is NOT software related but in fact noise related.
It is 1 of two things, haven’t had time to run back to back tests as the weather here has been way too hot and humidity is pushed up very high.

So it doesn’t seem it’s software related but noise related.

Hope this helps others.

Just adding another reply to this to keep this open whilst I trouble shoot. The dreaded dots are back. I have however, narrowed it down to NOT lightburn or the MiniGerbil board. I thought it was to do with the board and interference etc, but I swapped the stock M2.Nano board back into the K40, used K40 whisperer and lo and behold - dots.
Now, at the same time this all started, I did swap over to a Cloudray CR35 tube as the old one had just lost power over time. So I’ve realised it’s something to do with that or the power supply sending micro-signals and causing the ‘noise’. Will update over the coming weeks when I dig deeper.

The pwm is generally a high impedance signal path and the supplied wiring was probably more than needed. Most of these types of control signals are just digital signals, not carrying any current.

Nano board back into the K40, used K40 whisperer and lo and behold - dots.

I would think, it pretty much confirms you have a hardware issue. Assuming you didn’t use the same artwork and the problem lies there…

Can your power supply handle the new tube?

What kind of a spot is the laser generating (target paper)?