Downloaded the upgrade and things changed

Make sure one of these are selected: 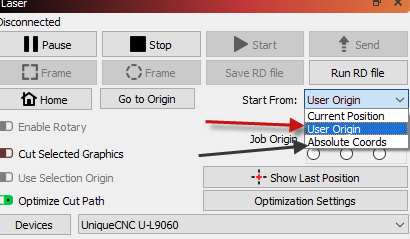 Absolute is 0,0 on the machine and your job output will be as placed on the work area to match the bed of your laser “Absolute Coordinates of WYSIWYG”. User orgin is where you manually configure an origin (e.g., hitting the orgin button on the HMI). Current position is where the laser head currently lies, that’s where the job starts.

Now to all of these mix, match, and optimize how best to combine with cut selected and use selection origin. I’m telling you. This application is so well thought out.

@Stroonzo - Tim has a Trocen controller, which doesn’t allow the setting of the different origin modes from software. Even their own stock software doesn’t allow it.

Earlier versions of LightBurn kind of worked, but it broke completely if you changed the mode on the controller itself, so it wasn’t workable for everyone.

Which version did you have that worked the way you described before? This release includes a fix for some origin and framing issues with Trocen controllers.

I’ll have to pull out a 3120 a test it with that - it’s using commands I got from Trocen to ask the controller which origin setting the user has enabled, and where the user origin is, so I can frame in the correct place.

I had whatever version was right before 0,9.13 , I keep up to date on the upgrades, BUT there was 2 upgrades fairly close to one another and I am not sure if I used my laser with the first one. I have one computer ( desktop ) that I use for design and general work and a laptop that I run the laser with. They both run with the same upgrade.

Ok, that’s what I was looking for - thank you.

Anybody else have any ideas? Still not working.