I just updated to version 9.11. Before that, I was on version 9.0 6. It used to be that I could have lightburn open, and then open up another instance of it on the same computer at the same time, but only the first one opened would actually control the laser. Since I updated, now if I have lightburn open and then go and try to open a different lightburn file, it tries to close the file that I have open in the first instance and just open up the second one in there. I looked in the release note, but didn’t see anything regarding this. Did I overlook it and we can no longer do this or is something deeper going on?

I hope this isn’t just the way it is, but I think it might be. It’s doing it on both of my computer’s, whereas it didn’t before. I don’t like it. If this was done purposely, I think it’s a big step backwards for the program.

I can open multiple instances of 0.9.11 on Max OS X, though I need to make a duplicate of the LightBurn application before doing so (because that’s how it works on a Mac.)

You still can, it’s just problematic for anyone with a single laser running multiple instances of LightBurn, because only the first one you launch can actually communicate with the laser. We had quite a few cases where people were getting the “controller might be busy” message and it turned out they were running two copies of the software, and trying to send from the 2nd one.

So by default LightBurn will now open double-clicked files in the running instance instead of opening a new one. You can just run another copy of LightBurn by running LightBurn, or you can turn off the behavior in the file settings: 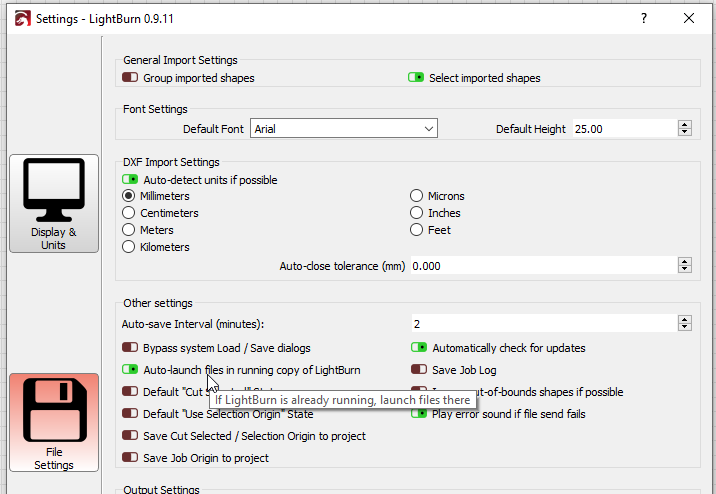 I never even noticed this. I have always (on a windows machine) just held down the shift key while launching a new instance of LightBurn.

Holding the shift key just resets the window layout. You shouldn’t have to do that to get a 2nd instance.

Would turning off “Auto-launch files in running copy of lightburn” also apply when one runs the “ExportToLightburn” macro in CorelDraw? I’ve been trying to figure out how to get it to not stomp on my active session, but to no avail.

No, that always launches in the active instance because I assume if you’re iterating on a design in Corel, you want the fastest possible path to LightBurn, not constantly opening a new one. You can change the Macro to run LightBurn.exe instead of SendUDP.exe and that will do what you want (as long as the previously mentioned flag is also off)

in my copy of LightBurn (0.9.11) is missing the switch to autolaunch (or not) next copy of Lightburn while another one is already running! How to fix this? 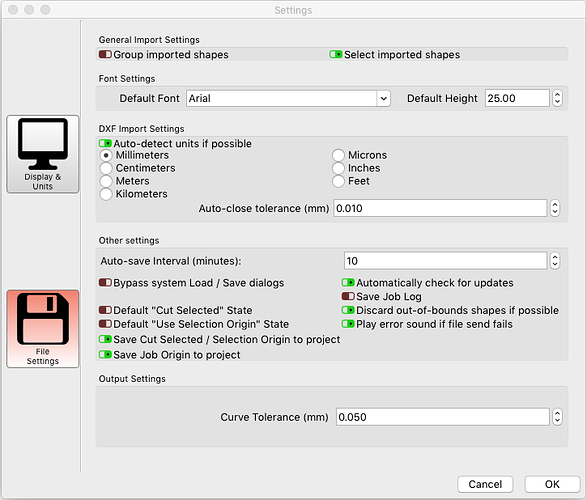 You’re using a Mac, and that is managed by the operating system itself. You’ll need to create a second copy of the LightBurn application in your Applications folder with a different name (like LightBurn2) and run that for the 2nd instance.

Thank You for the quick reply!