Edges of PNG file not engraving

Kinda new here and have been getting on really well with my new 80w Ruida controlled laser. Lightburn has been an absolute godsend paired up with illustrator.

I’m running into one really niggly issue which is annoying the hell outta me.

I’m engraving this Bitmoji which has been converted into high quality vector using illustrator before hand and then placed in Lightburn as an Image.

90% of the test engraving is perfect! Apart from the edging… For some reason the image isn’t engraving on the edges of the PNG image…

I have attached all of my settings, cleaned the laser rails and had a clean up of the lens.

I’ve read that engraving images at an angle (Not with the grain of the wood) comes out a lot crisper and clearer, now I know it’s only a cartoon image but I thought I’d stick with that principal.

As you can see from the test cut, the middle part is absolutely perfect! Just cannot figure out why the edges would be messing around.

Any help would be much appreciated! 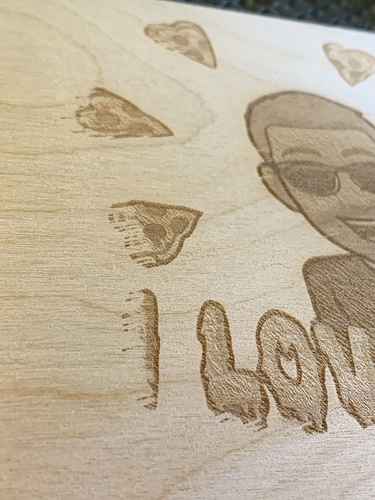 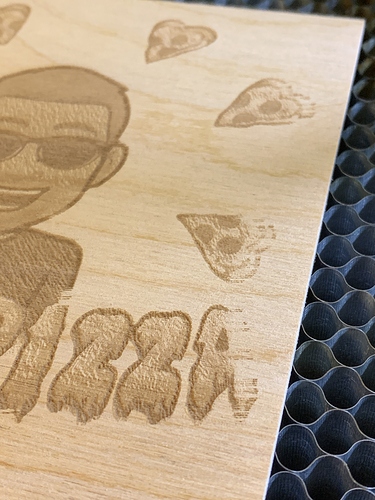 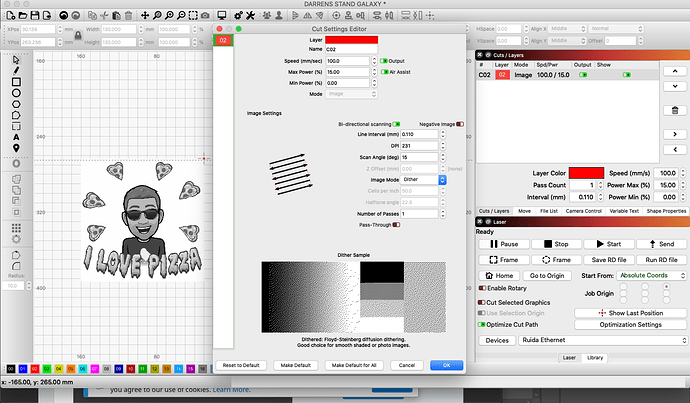 The short version is it’s because you’re engraving it at an angle.

The longer version is that it’s because you’re engraving at an angle, which is not technically supported by the hardware, so it’s emulated using normal cutting moves. That would actually work if you had set your Min Power value high enough to fire the tube. You haven’t, so when it slows down at the sides, the power drops and the tube cuts out.

If you set your Min Power to about 8% (ballpark / guess) it would likely work. The better option is to only use 0, 90, 180, 270 as engraving angles so the hardware engraving support takes over.

Angled scans are really only used for artistic reasons, or with diode lasers where the beam is often wider in one direction, and scanning along that direction gives better results.

An amazing and very quick response, I really appreciate that!

I’ll be back in my studio tomorrow so I’ll give it another go at a 90 degree angle instead. I’ve just found that engraving with grain on some woods (bamboo especially) doesn’t give the best of results.

Just set the angle to 0 - That’s the fastest possible option. If you don’t want to engrave with the grain of the wood, you could rotate the wood slightly, and rotate the image in LightBurn to match it.