Hello everybody,
with a direct USB connection my little CNC does a fine job everything works well.
During the lasering I usually place the CNC outdoor. As not to use the PC I bought a little offline controller.
I can control the CNC and also printing the example files of the controller works fine, but printing the Lightburn file does not work.
If I start the GRBL file from Lightburn the controller shows immedeately “printed” but nothing happens.

I think there is an issue with the header of the files:

I bought this controller: 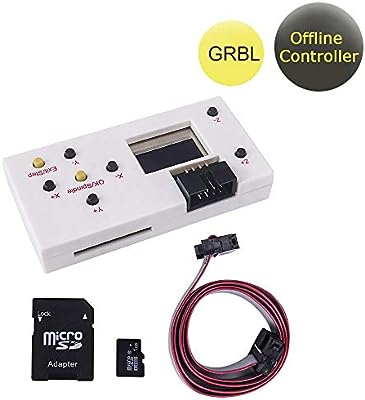 Has anybody an idea?
Thanks for your help in advance.

Which version of GRBL is that controller using? If it’s not GRBL 1.1f or later, you should use the GRBL-M3 profile in LightBurn. I notice the code you posted that works contains an M03 command, and the LightBurn gcode is using M4, so that’s a strong possibility.

Sorry, but the M3 does not work with the offline controler.

This is the header of the M3-nc-file:

I see two things that are different:

Try removing the comments from the LB file, and if that doesn’t work, try adding spaces between the GCode commands.

Deleted all comments and all spaces. Still the same

Will send it back to Amazon.

Has anybody a recommendation for a working offline controller together with lightburn and the 3018?

Made an other test with a GRBL freeware and it was working.

How is it possible that the CNC3018 works fine via USB and Lightburn but not with the NC-file and the offline controller?

Here’s the header from the free software:

Did you ever figure this out? It sure looks like the CNC has it’s own GRBL controller on it which works with the USB serial g-code streaming and then there is another GRBL based controller in the “Offline Controller”. The Offline Controller connects to the CNC controller stepper motors and switches over a ribbon cable and something in that controller doesn’t parse the G-Code files the same as the CNC’s onboard controller. There is literally just a series of lines of text being sent to GRBL, both over USB and when read from a file on an SD card.

I would ask the maker of the product why it will not read the same G-Code the same. ie the exact same G-Code is being sent over USB as is stored on the uSD card when Lightburn is involved. The only difference I could imagine getting involved is there being line ending character differences. ie some systems put CR(\r carriage return) and others put CR/LF( \r\n carriage return and linefeed ).