I am using an Ortur Laser Master 2, not sure if that is relevant, and using what I believe is considered a “vector” image from adobe illustrator. The problem I am running into with Lightburn is that I either trace the image and get a double lined, outline or I run the image as it is and have an almost 4 hour burn time. The same image using Lightburns trace function will take less than 30 mins.
It seems that when it runs the image without trace, it covers the entire area line by line, filling it pixel by pixel (Sorry, I may be using completely wrong terminology) and this seems to be what is extending the burn times.
Any help would be greatly appreciated.

Share the settings for this job, the LBRN file and a picture or two of the results you get, help us “see” what is happening and what you are trying to do, we can offer some suggestions that might help.

Here is an image I drew up with very little to it, I ran it through the trace image feature on Adobe Illustrator. 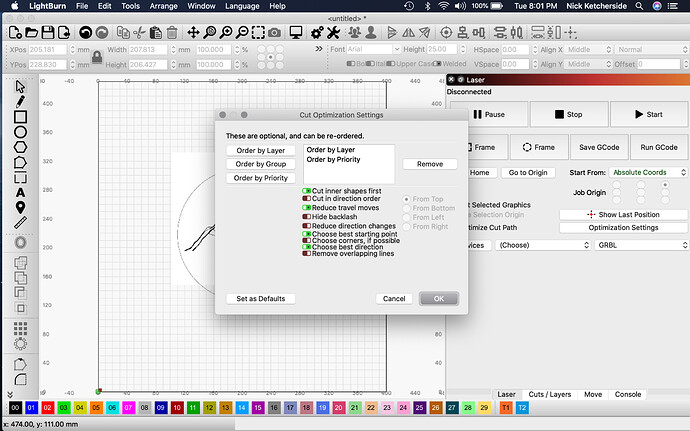 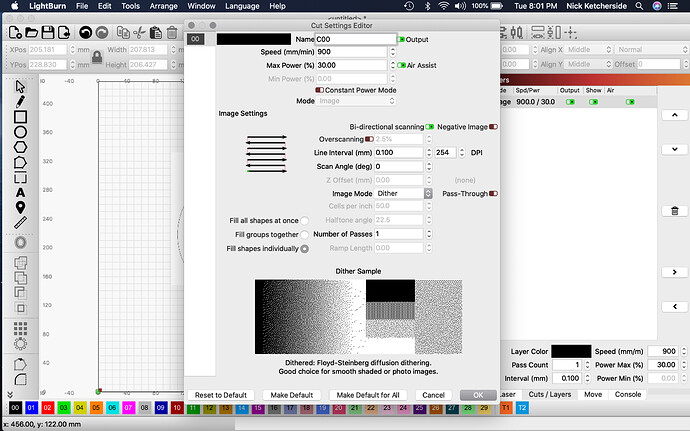 Here you can see how it is printing line by line and how long of a burn time it will be. 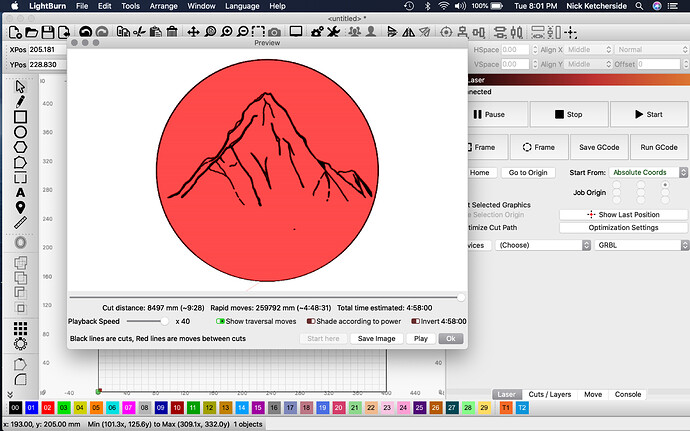 This is the same image using lightburns image trace, which drastically reduces the run time and does double lines. 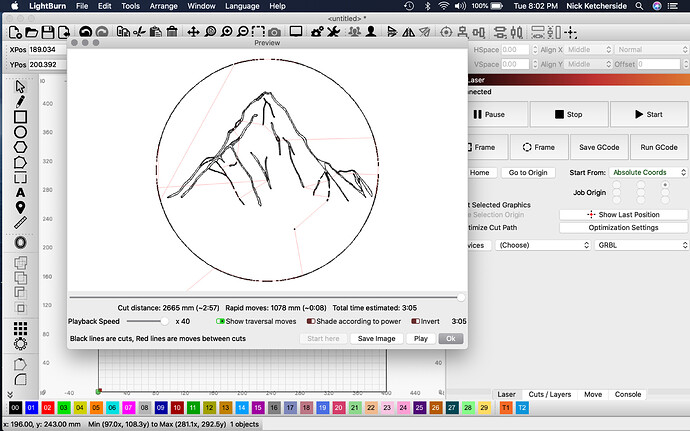 After using the LightBurn Trace Image, I might place the result on a Fill layer and run that. You will get a similar look to the 3rd Image you shared, but should produce faster.

Thank you for the suggestion. That does work but it also changes more than I want it to. Is it not possible to make the first one work?

Is it not possible to make the first one work?

What do you mean, “work”? You asked how to produce this look requiring less time. Are you not seeing a reduction in the estimated time to produce?

P.S. I have bumped your profile, so you should be able to post more now.

Thank you for your help, I appreciate you taking the time to try and give me some answers.
The problem is that, while my image of the mountain is relatively simple, and your suggestion of doing an image trace and fill does work; once I put in a more complicated image, using image trace is no longer gives me the quality I want. I am hoping to resolve the issue with a simple image so that I can start using more complicated images.
The issue I am seeing, is that the laser is printing in layers from the bottom to the top, which takes a very long time 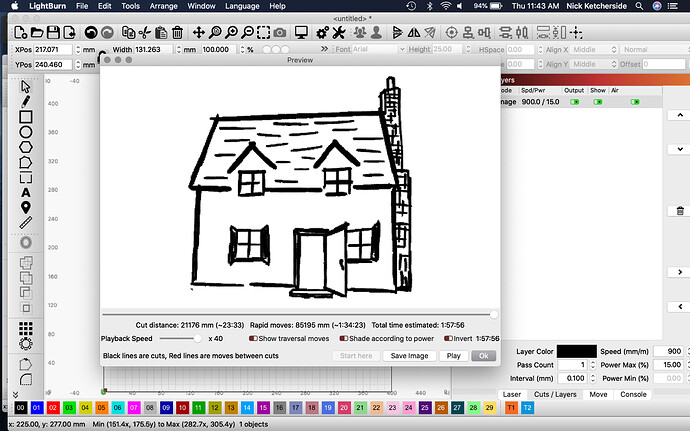 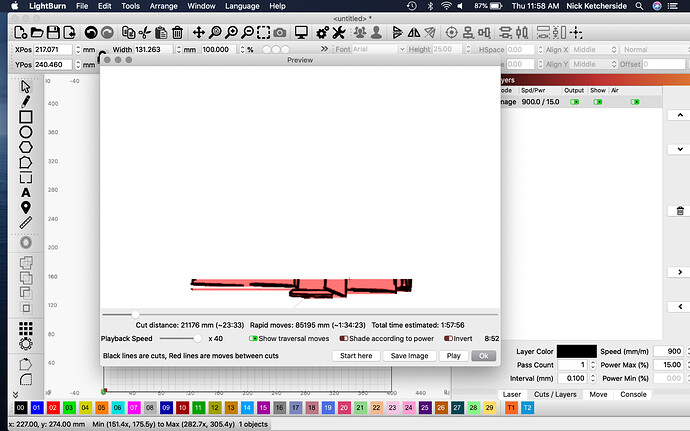 image2560×1600 454 KB
You can see that this is not a complicated image, but because the laser is covering the entire area one line at a time, the run time is long.

Alternatively, as you suggested, if I do a trace and fill, I get a shorter run time. It is faster because instead of tracing over every single line, the laser immediately begins etching the image instead of covering unnecessary space. 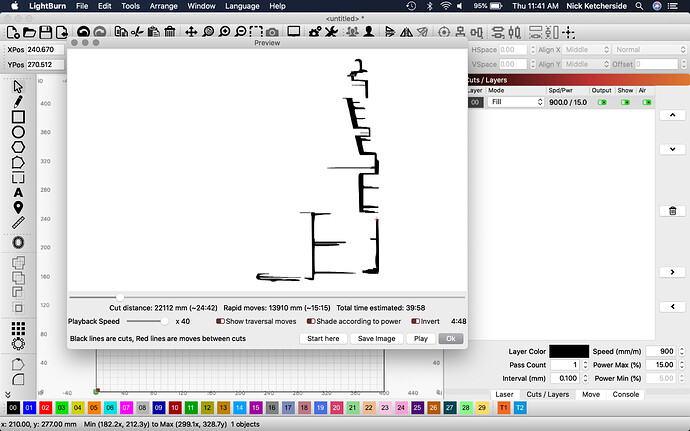 The method of printing both images is vastly different, and I would like it to use the second method as opposed to the first.

Show us what your complex design looks like and we might have suggestions. You are using a low speed device, and with your current settings, producing 254 lines for every inch filled. This takes time. You could reduce this Interval to speed the process, but should test to find the right interval for the best-looking fills from your Ortur.

I understand its a slow device, but what I am looking at is a software issue not hardware. The same image through trace and fill, which has the exact same area to be filled is taking far less time, mostly because of how the program is attacking the image. It either wastes time covering all of the area, even spaces that are empty or directly goes into printing the image.

It either wastes time covering all of the area, even spaces that are empty or directly goes into printing the image. 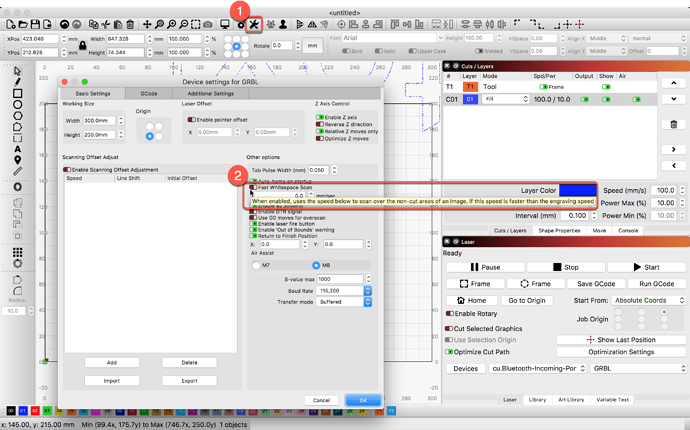 Hi. I use a different laser, but I do use Illustrator, and I had a problem with double lines. After importing your image in Lightburn, go to Edit/Delete Duplicates. That will remove any extra lines. I hope this helps.

I too had the same issue with a couple of my files. I found that when doing a trace on an image I would also get double lines. I think the issue for Lightburn is that the trace function traces both sides of a wide solid line so you end up with two images with a space between. You can have the laser fill in between the lines if you want wide lines but if you wish to have a fine vector line, that is a different story. I do wish Lightburn had a function to do a single line trace similar to LaserGRBL which centers the trace in the center of a wide line. I do not know if Lightburn has a similar function because I haven’t explored all the subdirectories yet.