After I got my red/black 80W with the Top Wisdom Tl 410c controller I have been occupied with other more important things the last 4 months. I was also hoping lightburn would by now officially supporting this controller. ( No complains, I know it’s a lot of work)

Here my question:
Should I still install the Chinese Software (Auto Laser) that came with the machine?

Typical reviews are pretty terrible and I am not looking forward to install and work with it. The documentation talks about Win7 and Coreldraw up to X7 environment. I am running Win10 and CD 2019. So I don’t even know if the install could be successful.

On the other hand I could already go for Lightburn instead, knowing not all functionally ( I am looking forward to) is implemented yet as it is still in beta mode.

Is lightburn at this point stable enough if connected to a top wisdom to do the install and connection and start just with the basic functions?

I have to learn much about the machine and the software, doing calibrations and probably some mods/ upgrades and would need time for it. Perhaps by then the software has cought up and is out if Beta.

When asked last November I was told as a Newbie not to go this route as I wouldn’t recognize bugs to know they come from lightburn or have other reasons. I respected that. Would this different now 4 months later?

I hope for some guidance.

Is lightburn at this point stable enough if connected to a top wisdom to do the install and connection and start just with the basic functions?

The TopWisdom work continues. The current public release is working, but we have identified and corrected a few things along with continuing to add functionally in the next release. We are currently testing this candidate internally and look to release this next version soon-ish.

I suggest you can try the current support provided by using our 30-day trial version. This will get you going with the new version right around the corner. We can extend this trial if needed as well.

The next release, due shortly, has the known bugs for TopWisdom fixed, and adds a bunch of functionality. We’re still working on adding rotary and machine settings, and there are likely a couple other holes in functionality, but those should be addressed relatively soon. I think as of the next release we’ll be calling TopWisdom support ‘official’.

I will install the current version to get me started. With the next release I will buy my license.
Thanks for the great work!

Update:
LB ist installed on my laptop. The program found my Top WIsdom without any Problems.
Now I have to figure out the rest to get it going!

Those numbers are off by a factor of 60, which tells me you are set to mm/minute, not mm/sec. Go to Edit > Settings, and in the middle here, change the units to mm/sec: 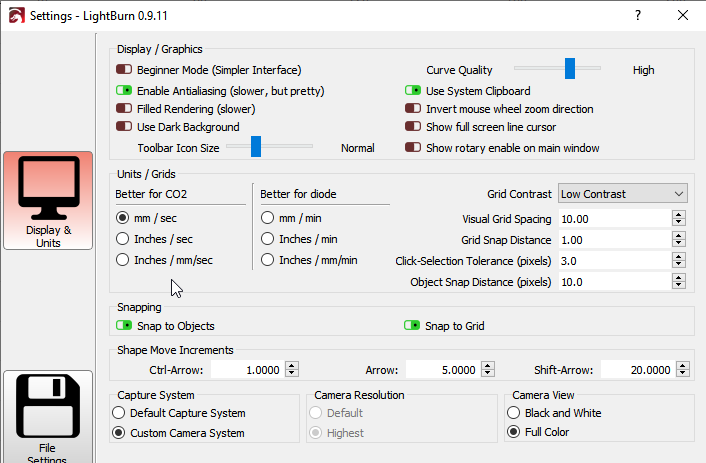