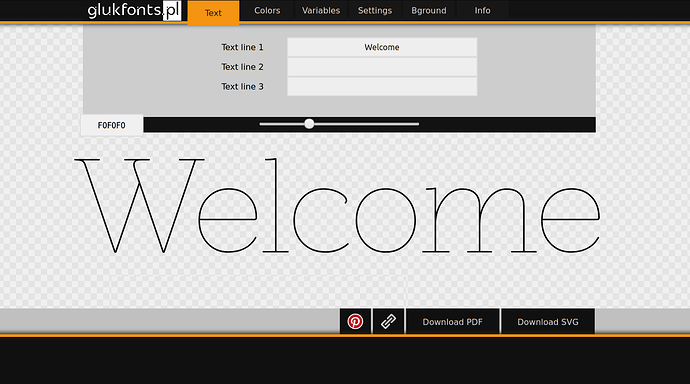 Project is experimental, so I am curious about any opinion or suggestion (especially when engraving

That’s a great start to a resource that can really be useful. 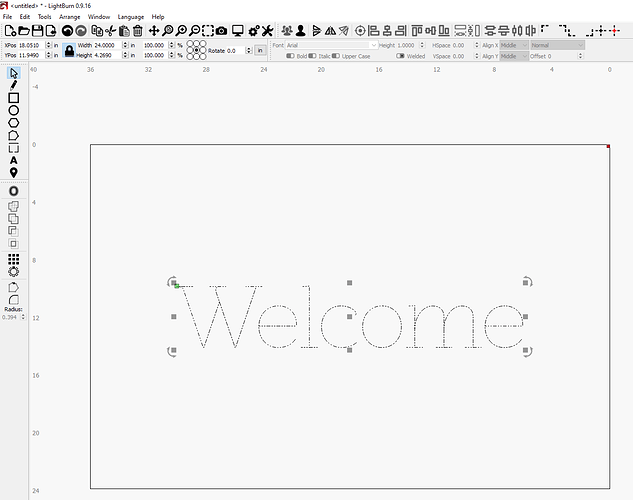 As you’re building the tool, maybe some inspiration on other Single Line font types having… more than one line (which have their own weird uses): 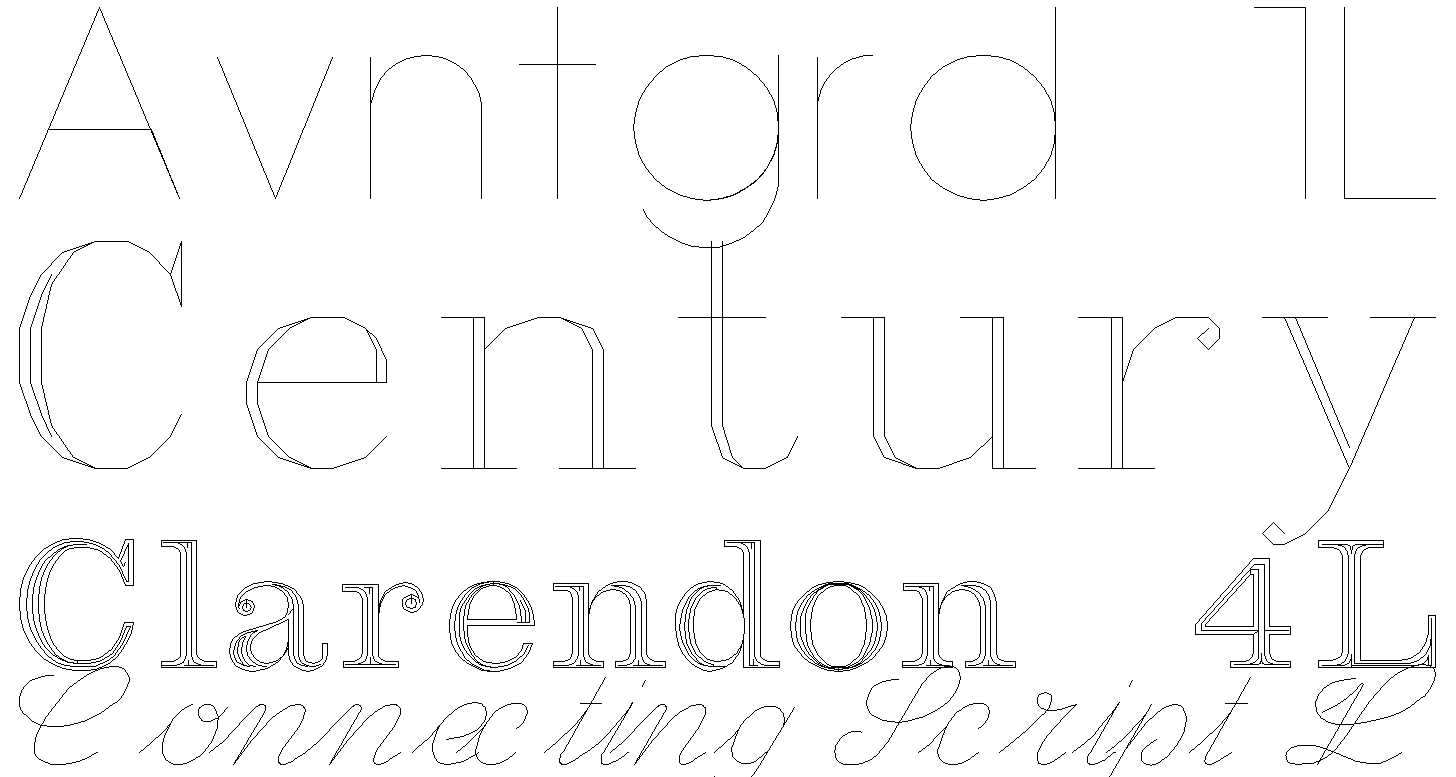 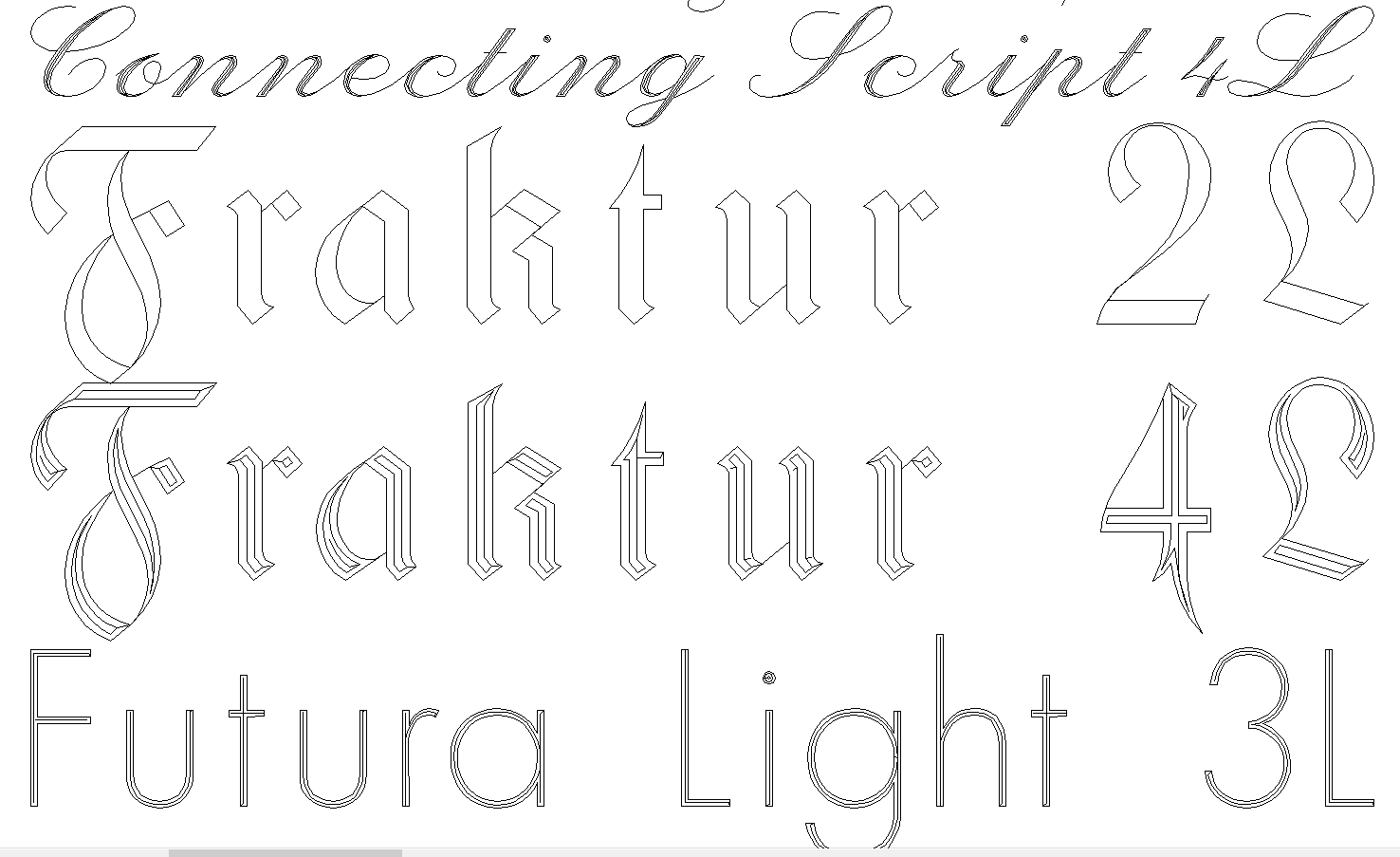 But on your last inquiry regarding engraving, I find that single line fonts are not your traditional candidates for “engraving” (if we’re talking raster engraving). But for line mode / vector engraving, that’s where they shine! See on the right side, a traditional scan / engrave layer makes for strange result (but on the left, line layer is just what these fonts are great for): 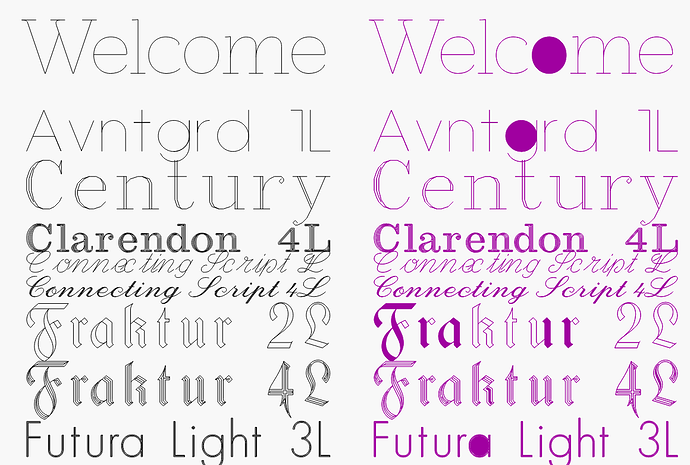 Do you only have the one font? Or is there a way to change to font?

I’m working on some other fonts, like a funky script above or 2-layers (line + fill) font: 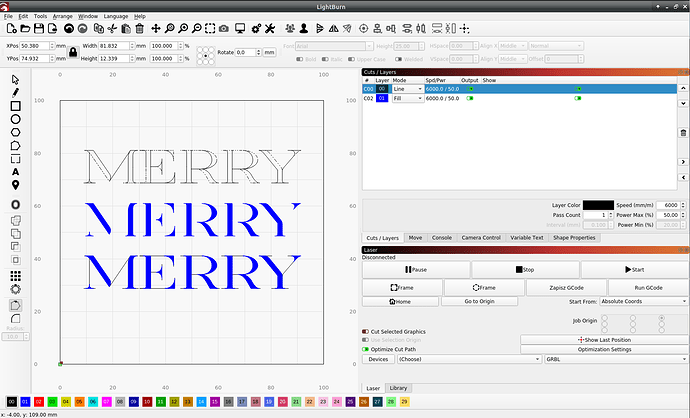 … " Or is there a way to change to font?"
From my point of view, I can relatively easy prepare TTF font in new SVGinOpenType format. But this has one drawback: at this moment only Adobe Illustrator support it (not Inkscape or LightBurn)

We actually have support for single line SHX fonts coming in LightBurn as well. It’s getting close to being given to the beta group. 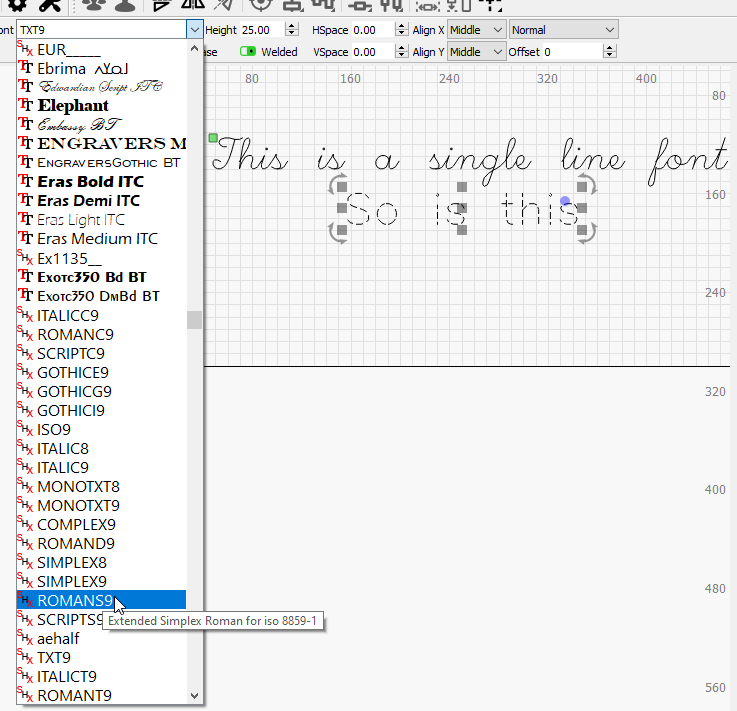 SHX is equal to SVGinOpenType?

No, as far as I know no, SHX is poorer
first of all SVGinOpenType format uses OpenType features like Ligatures, Kerning, Contextual Alternates, Stylistic Sets etc.

No, as far as I know no, SHX is poorer

Depends on how you look at it. The fact that SHX is much, much older than OpenType SVG is an advantage in many ways. Specifically the fact that SHX is designed for CAD/CNC applications and has been around long enough for there for be many SHX fonts available.
Yes, it’s an old (and kind of ugly) format - but LightBurn users won’t need to worry about any of that as we’re handling all the format parsing for you. And OpenType SVG is still designed for display - not for CNC applications. Font glyphs could still have features that are not really possible to “render” with a laser as opposed to SHX which is designed for exactly that scenario.

That’s not to say, at all, that what you’ve made @glukfonts isn’t cool. It very much is and I plan to use it - especially once you have more fonts. Just trying to explain the difference and reasoning with SHX - also we’ve had many people just specifically request SHX support and it’s a feature that RDWorks has that we didn’t yet.

@adammhaile - I agree. I don’t expect, LightBurn will support SVGOpenType fonts. Just @vedafilter asked about differences beetwen formats. As far as I know, there aren’t yet SVGOpenType fonts for cnc.
That was one of the reasons why I created my own on-line renderer

Thanks for your explanations.

And how can I print a sample book of them?

@adammhaile - I agree. I don’t expect, LightBurn will support SVGOpenType fonts. Just @vedafilter asked about differences beetwen formats. As far as I know, there aren’t yet SVGOpenType fonts for cnc.
That was one of the reasons why I created my own on-line renderer

And how can I print a sample book of them?

Just stick them in a folder and then in LightBurn you will tell it what folder to check in the Settings dialog. There’s no “installing” them on the operating system.

Only way to get a sample right now would be to just manually do it in LightBurn - though I’ll talk to @LightBurn about integrating a way to show samples of your SHX fonts. We talked about having them render like TTF fonts in the font chooser but for a bunch of technically reasons that wasn’t really possible.

I plan to use it - especially once you have more fonts.

@adammhaile - nice, then let me introduce (still work in progress) 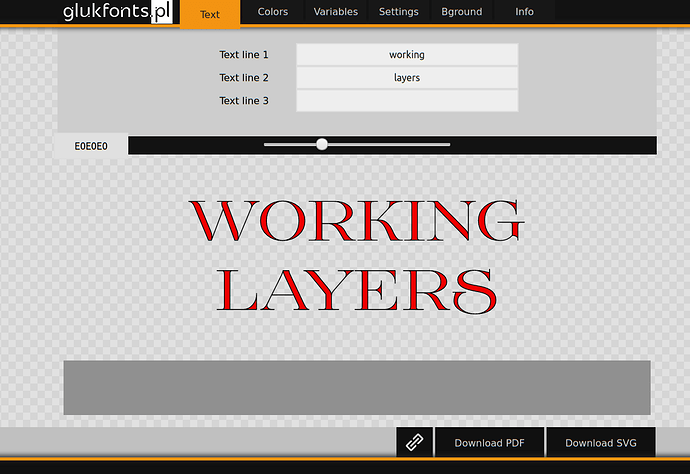 in LightBurn after SVG import it should look so 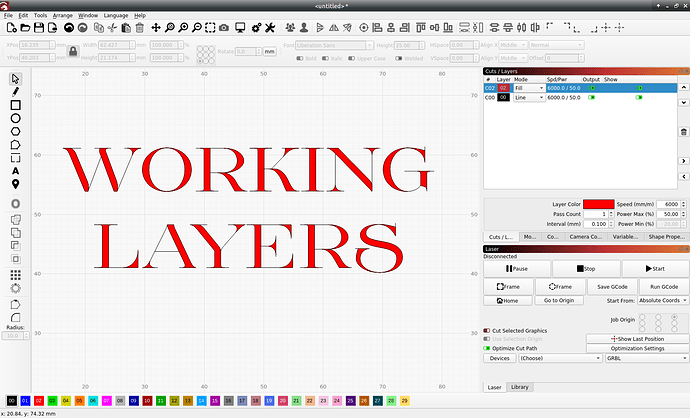 with 2 separate layers ( LightBurn set automaticaly mode “fill” and “line” - I have no Idea, it’s lucky, or detect it from open contours ?)

What are the “fillings”? Is it separate lines it just a filled shape?

I have no Idea, it’s lucky, or detect it from open contours ?

You probably had that red cut layer as a fill previously. 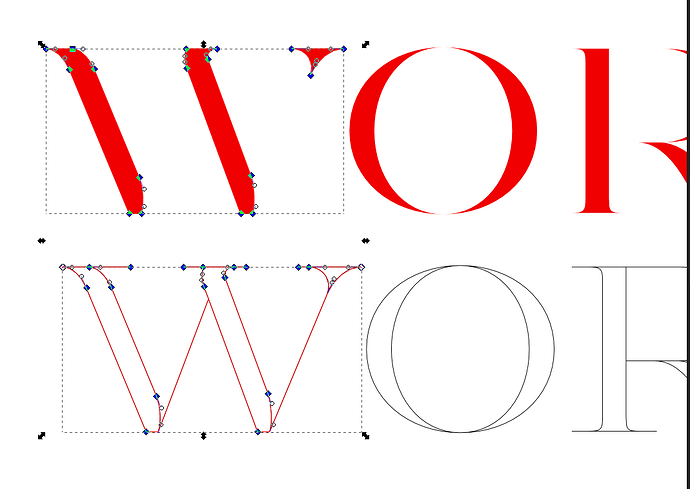 What is the purpose of that font? We can already choose in LB layers the option line+fill. Or is something special hidden in the word “true”?

Or is something special hidden in the word “true”?

It works fine when importing SVG into Lighburn. PDF imported correctly into Coreldraw 2019, and it looks correct in Adobe Reader.

Here is how PDF looks in both Illustrator CS3 and Lightburn.

@RalphU thank You for info. I corrected temporarily, and PDF should work (at least in LightBurn) but result is unexpected and requires more investigation … 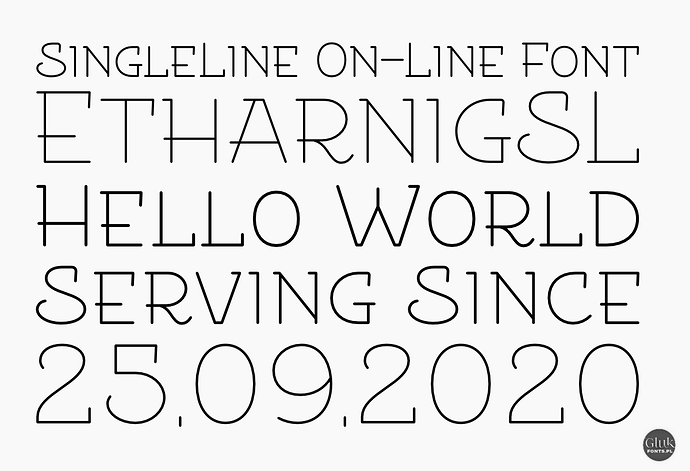 Are you going to make this font available offline / able to download?