Getting a "Curtain Effect" with 7w JTech laser on X-Carve

Hey there! I have been running my JTech 7w laser on my X-Carve with X-Controller for about 3 weeks now and I was doing a test burn on a piece of cedar and I began to notice some vertical lines in the solid filled squares. 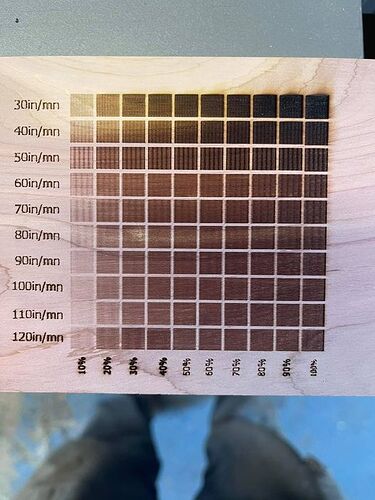 Test Burn526×701 65.8 KB
I looked back at some previous test pieces I have done and I can see it faintly on those also. (I think that the cedar is the softest material I have tested on and that is why it is more prominent.) I am not sure what may be causing this.

What I have tried.

I found a similar thread here on these fourms but was closed.

Here are my GRBL settings if needed, and if I can provide anymore information, I would be more than happy!
$0=10

That was my other thread. I wouldn’t call my issue “solved,” but here’s what seemed to help…

Both J Tech and Lightburn suggested it was the machine, not the software or the laser. Jay suggested that tension needed for router carving was much greater than needed for lasering and that greater tension caused vibration. I loosened the belts and the effect did lessen. But, loosening and tightening the belts when switching from router to laser doesn’t really seem like a viable solution to me.

I happen to engrave with my 4.2w mostly at 100%, 100ipm, so it’s usually dark enough I don’t notice the pattern, especially if I run with the grain of the wood.

Lastly, coincidentally or not, I switched to an aftermarket fixed laser mount, instead of the magnetic one, and haven’t noticed an issue with the “curtains.”

This is great information!! Thank you so much for responding! I have my gantry pulled apart right now and I’m cleaning all my bearings and pulleys and checking all my belts and so on.

What fixed mount did you end up going with?