The screenshot shows 3 versions of the same image. On the left is a black bitmap png file with a transparent background. In the middle is the same image with a 50% gradient from bottom to top applied in gimp and exported as a png. On the right is the same image as the middle, but exported as a jpg. I guess jpg doesn’t do transparencies, so we have the white box background.
Notice in the preview window, the two png files with the transparent backgrounds both appear the same, but there is no shading according to power on the middle image. The righthand image has the shading. If I add a white background to the middle image, it will preview shading according to power.
At least with the jpg, without a mask applied in lightburn, I cannot set a minimum power above zero or the white background gets engraved. I have not tried engraving the center image because it shows in preview that the power won’t vary according to shading.

My goal is to be able to engrave a grayscale png with a transparent background like the middle picture where the power varies according to the shading.
Can anyone tell me what I’m doing wrong? 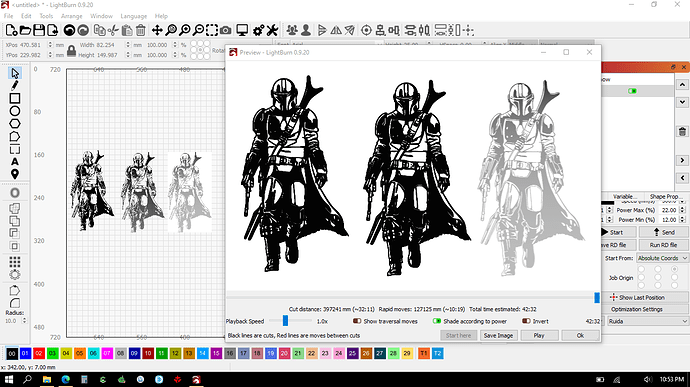 I figured it out. Seems Lightburn is cool with transparent backgrounds, but it doesn’t like a semi or partially transparent bitmap. It’s because it is not really a “grayscale” image. So to solve it, I first made a white layer under the black layer. The switched back to the black layer and selected the black parts, switched to the white layer, inverted the selection, and hit delete. What remains is a layer with a white version of the bitmap, and a layer with the black version on top of that. I then applied my gradient to the black layer only and exported both layers as a png. Now it is a real grayscale image and Lightburn varies the power of the engraving based on the darkness level of the shading and the power max/min range selected.