Hot camera, but not stolen 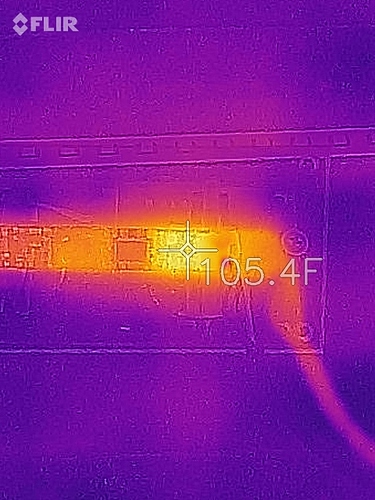 In the process of breaking my existing camera, I discovered that it gets a bit warm. Handy little gadget, that FlirOne iPhone accessory. The image is a bit misleading, as parallax error makes it look like the hot spot is on a mostly empty portion of the circuit board. The chip to the left of the cross hairs is the hot one. 105° F is not particularly hot when it comes to electronics, of course.

How do you like that Flir system, Fred? It isn’t able to “see” the beam path of your laser as it bounces from mirror to mirror, correct?

The Official LightBurn Camera does indeed run “quite warm”. I would have thought that it was a bit more than 40C.

Ray, I didn’t let it run for very long, it’s possible it may get warmer. I’ll check the new one when it arrives and is put to extended use.

Doug, the Flir does not see the laser and I suppose the only way to make it visible would be with smoke or fog. It would be invisible to the Mark One Eyeball, but might be visible to the Flir. I learned that the laser will scatter enough and reflect to the IR camera with sufficient power to damage the sensor, and that Flir will cover it under warranty. I’m making loose supposition that what I describe is what happened, but the chronology fits as does the experience.

Using the Flir through the cover is uh-duh, because acrylic absorbs IR and the Flir shows you the temp of the cover, nothing else. Open the cover and whatever is reflecting from the part being worked now damages the fairly sensitive detection device.

I’m mostly afraid to use the device near the laser when it’s running. I might try a burn with no exhaust fan, on cardboard, with the nozzle air flowing, to see if the smoke generated will show the laser on the Flir, but I’m going to keep the sensor away from viewing the workpiece and maybe stay level with the horizontal beam from mirror two to mirror three. I might not.

I’ve noticed this as well. What I do is after I take my picture, I just switch camera to “None” so it shuts it back off. It would be nice if you were on the Camera Control tab that it would automatically shut it off until you go back to that tab. Just my .02!