Image lines/border lines not lined up

I was doing a project for a K9 officer on some black brass (not real black brass but I forget what it’s called) and it messed up some of the outside border lines. I have a ortur LM2P and I was engraving at 250/95 then went 500/80 in case it was a power issue. The table it’s on is crap but it’s level and the other plates didn’t do this. The other plates I did were 2x3 and this particular one was a 2x8. One of the 2x3s had a police badge on it that messed up a circular design inside of it. I have no clue why this is happening. Any suggestions? Attached are the pictures. 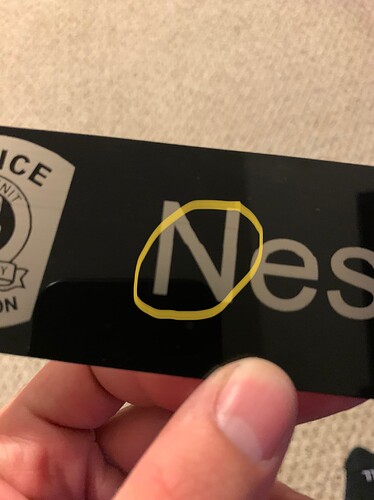 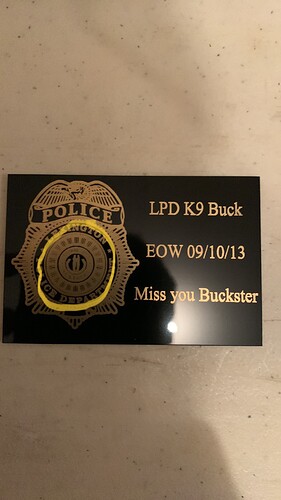 So this is some kind of ‘coated’ metal or ?

The first photo the aberration is going across all the letters. I can see it in both the ‘e’ and ‘s’.

Is it the detail in the 2nd, center of the shield? Can’t really see it too well, but some of it looks rather ‘uneven’, burn wise.

How did you come up with the ‘power/speed’?

Yes it’s a black coated brass. It’s similar to a sort of powder coating. I had gotten the power settings from a video trying to do dry moly on metal so I tried that and it came out pretty good minus a few spots. I tried the 500/80 on a scrap piece, I’m sure I can lower the power and increase speed. What’s weird is it only does this on this material and doesn’t on wood or tumblers. But this is the only material I’ve done this slow.
On the 2nd picture I couldn’t zoom in good enough but the circle inside the badge is offset as well. 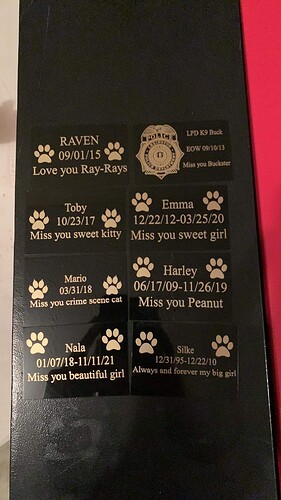 The image looks like it’s a mechanical issue. I can’t think of something it software that is intermittent. It’s more like something is loose. If it stayed ‘offset’ I’d go elsewhere with a diagnosis.

It returns, back to being lined up, if your artwork is OK and the preview doesn’t show it, I’d go back over it for some kind of very minor mechanical issue. It doesn’t take much for you eye to spot something off.

They’re for a K9 officer but yes I am also an animal lover.

I’ll go look at the belts and see what’s up. Only thing I can think of