I’ve scanned through some threads but didn’t happen to see one on this specific question. Hoping someone can point me in the right direction - I’m imagining I’m just missing something easy.

When I have an image within my work area and the border area (ants in a rectangle around it when you select it) my Ortur gives me the what for and it won’t work until I move the border area within the work area which also scales down my image. 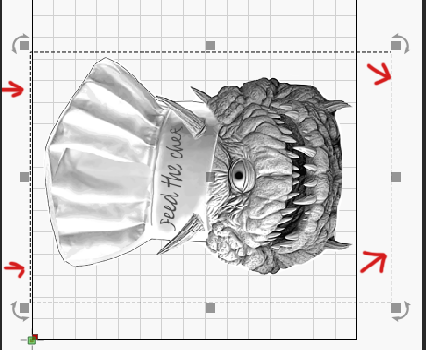 Is there a way to get a sticky outline that rides the actual boundary of the image instead of a bunch of wasted rectangular space?

I also have ignore out of bounds off in the settings but this didn’t seem to do anything for me in this case.

The image you have of the settings shows that ignore is turned off. Is that a capture error or are you using the off setting and thinking you have it turned on?

The bounding box of the image is larger than the image. Consider to load it to your preferred raster graphics editor (Photoshop, GIMP, PaintShop Pro, even MS Paint) and crop off the excess area.

I screen-captured your image which resulted in a much larger bounding box, then cropped it. Original on left, cropped on right.

It should actually run if you run it, even though the transparent parts are out of bounds, because the actual image content is “safe”. We’ve internally discussed the possibility of making the frame for images smarter, and having it exclude transparent regions.

Uh oh, maybe that’s the problem. I’m misinterpreting the off and on function. I will try that here in a bit and see if that solves it.

If any portion of the boundary ‘ants’ are out of the work area it either doesn’t do anything and if I try it a few times (thinking I hadn’t clicked the button or something) then I have to restart ortur/lightburn to regain comms.

As I mentioned to fred - Perhaps I mixed up the ignore out of bounds off and on toggle.

I’ll report back here in a bit.

Red is off, so it shouldn’t be trying to ignore them for you. I would expect you to get a warning about a possible out of bounds, but then if you continue it might be ok.

So I toggled ‘ignore shapes outside bounds’ to green and gave it a try.

Console says it found an *alarm near line 2 and i have to hit reset on the Ortur to get comms back up. 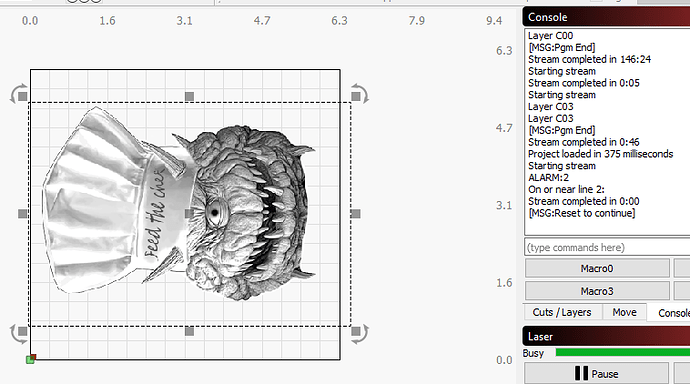 If I move the ‘ants’ into the work area - no issues.

Is it possible white space in the image is causing the issue? I wasn’t sure if white space was just converted to transparency or not.

@fred_dot_u
I tried what you had mentioned. Went over to Photoshop and drew around it with a lasso, and then brought it into Lightburn. It still had the rectangle boundary over it and I placed it with some of that overhanging the work area (knowing it was nullspace)… Same problem.

Perhaps it needs to be a certain format - like a PNG or something that retains transparency?

If you cropped away the image, but used a non-orthogonal tool, your bounding box exists as a rectangular shape around the crop. If it is larger than the crop shape, something else is amiss. PNG is a good format for the reason you mention, transparency can be helpful with image processing of this sort.

What does it look like in the preview? If there’s so much as a stray dot at one of the edges that isn’t quite transparent, that would be enough to send the machine out of bounds. Look at the preview with travel moves turned on.

Good info from both of ya, thanks.

I will cut it out around the outline and transfer to a brand new png file with transparency, to be sure there’s no random dot somewhere, and try again. I’ll let yall know.