My first post. I have been having issues for a while with images. I’ll run the file and everything will look good until it reaches a certain point and the engraving will start going sideways, not in the intended area. It’s very random, I don’t know why this occurs and oftentimes I’ll restart the same file with the same settings and it will come out perfectly. Any ideas or suggestions would be appreciated. Thanks! 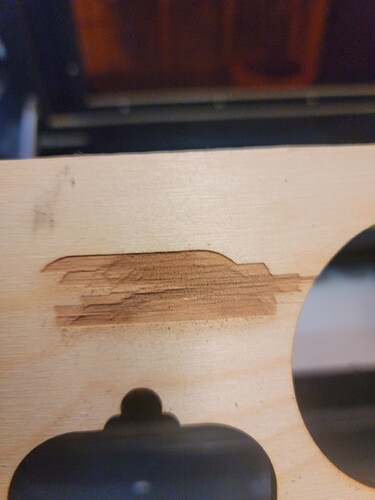 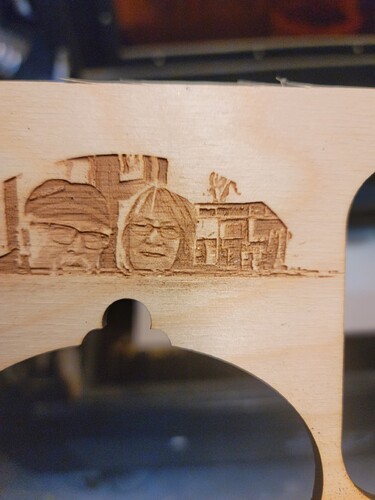 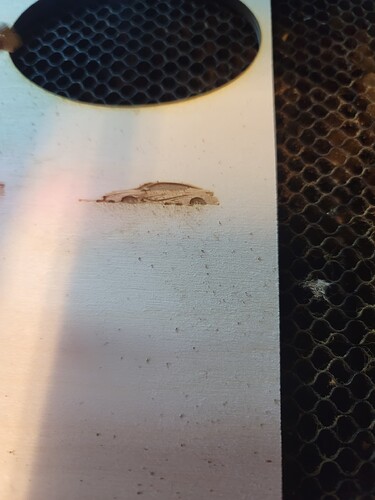 Is this a new or newer machine?

Generally when you have new issues, check all the electro/mechanical mechanisms, including the wiring.

Just a slight wiggle to ensure they are tight. One of mine was ‘hol glued’ only. Never turned the screw.

Can you hear anything ‘different’ when it has the anomaly?

Backup your ‘Edit → Machine Settings’, so you have a fresh copy of the supplied configuration.

I’ve had it for 6 months. Started doing this randomly within my first few attempts at doing images and it’s never stopped. It’s not often enough for it to be a big problem but it is often enough for me to get annoyed with it. I’d say it’s 1 out of every 20 engravings has this issue. Talked to the guy who built it for me, he seems to think it’s a signal issue. I removed any magnets or devices from around the controller except the laptop. It could be the laptop I suppose. Guess I’ll try moving it somewhere else and see if that makes it stop.

If you are connecting via USB, I’d move to Ethernet if possible. Although I doubt this is the problem here, just more dependable. The Lightburn people have software that runs on a Raspberry Pi and is a wireless connection from your network to the Pi and Ethernet to the Ruida. Much better than a standard wireless bridge. The LightBurn Bridge is a pre-configured Raspberry Pi that connects a Ruida controller to your WIFI network. Simple to set up, fast, and robust, with transfer speeds equal or faster than USB. Intended for Mac users to overcome issues with USB...

I had a Pi and just downloaded the software from Lightburn.

Check the machine over for loose anythings… Electro/mechanical. Belts sometimes don’t get the ‘lock nuts’ locked down, one of my wires was held in with only the hot glue. Never a screwdriver had touched it. Check the belts. I’m sure you have no idea how tight they should be. Feel them both and see if they are different. You can ‘gently’ tug on the wires from the controller/drivers to ensure they are connected well.

Look closely at any electrical parts or cables that ‘move’ to look for wear or damage. This can happen in the ‘drag chains’.

It appears almost like it’s loosing steps, but it recovers, as it appears in the first shot. General rule, they loose steps, they can’t recover, requiring a homing cycle…

I have checked all the basic stuff. Really don’t think it’s in the belts. Rails are clean and greased. No loose wires. I’ve been leaning towards an issue with my USB. I am fully capable of checking my belts by the way. Weird assumption to make lol. Thanks for the input, have a good one.

Once the job has been sent to the controller LightBurn is mostly out of the picture for DSP controllers. Do you get a job preview on-screen? If it looks correct then it’s unlikely anything to do with USB.

You could try transferring through usb thumb drive or ethernet to rule it out.

It might be that your stepper drivers are overheating and skipping steps. Try slowing down and see if it improves.

Pretty sure it was signal issues from devices near the controller. I moved my laptop after i made this post (its in a stand right next to the controller where I set it up when i first got the machine.) Haven’t had it happen since except the one time i accidentally put my phone on top of the controller. Weird but it seems to be solving the issue.