I’m trying to create a knurling pattern on a tube using a 50 W fiber laser and a rotary chuck, but I’m getting inconsistent results where some lines mark deeper/stronger and some lines mark shallower/weaker even though they’re all on the same layer in LightBurn and marking within the same pass/slice.

I’ve attached images trying to show the inconsistencies, but the degree of difference is hard to capture on camera due to how it catches the light. I previously had this project in Ezcad2, and the knurling was consistent all throughout. But we switched to LightBurn because Ezcad2 started crashing on us mid-marking. Any ideas what’s causing the issue/differences in LightBurn and how to fix it? Thanks! 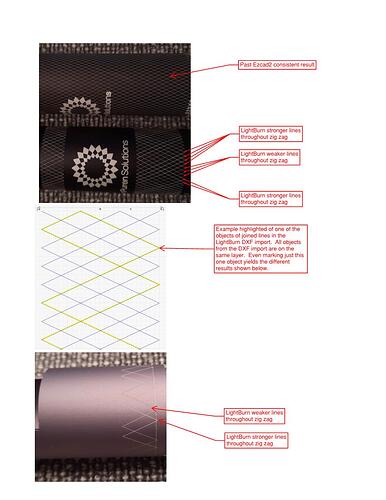