Is it possible to cut several groups with the exact same cut order inside each group?

With grouping and setting group priority, I can get each design to be cut completely before the next is cut, but the cut order is different for each next group, and each group starts cutting in a different place.

Is there any way to set this or a work-around where I can make this happen?

(Why do I want this? I’m battling an alignment error where when I cut several designs some of them have errors where the cuts don’t line up, an error that is 100% reproducible. The first and 3rd and 4th designs that are cut are perfect. If I can get LightBurn to just reproduce the exact cutting path on design 1 over and over, all of them will be perfect. Yes… the bigger problem is this milalignment and I’m working on that, but a work-around with cut order would save the day temporarily!)

Yes… the bigger problem is this milalignment and I’m working on that, but a work-around with cut order would save the day temporarily!)

We agree. The following shows our Cut Planner in action and the different choices available and when best to use these options. After review, share a bit more, or even the LightBurn file if you want, and we can help refine the flow as you’d like it to progress. (video is a little dated, but the concepts remain the same. 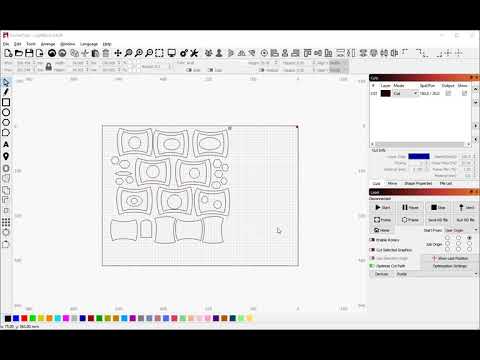 Hi Rick! I’ve watched the video and had tried the various tools you have … which are fantastic I should add!

Here’s a simple example to see what I’m getting at. I have found a work-around! It’s not ideal, it takes a bit of set-up but it’s fairly efficient.

I’ll use this sample design to illustrate both the problem and what I’ve discovered to get around this problem. I begin with a design, group it, duplicate it, and set to Order by Group. As LB moves from one group to another, it has a new starting point within each group, and thus the lines in each group are cut in a different order. That is not what I want. 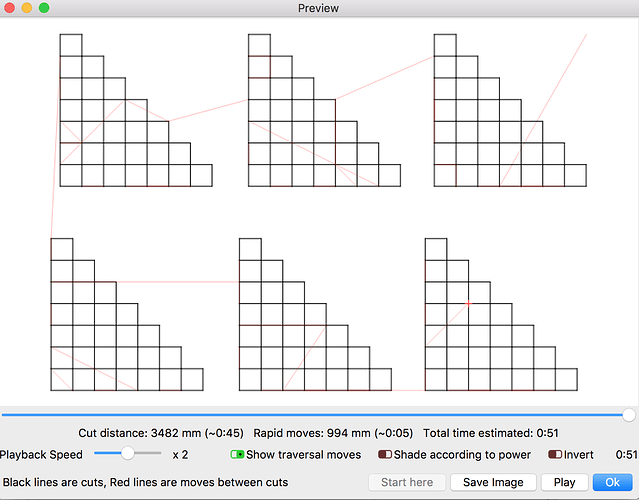 Now I’ve added a little square near the top left corner of each design. I’ve then set shape priorties for each group from 1-12 to make sure LB cuts the little square above each design before the design itself and thus forces LB to begin at the same corner each time. But… each cut pattern is different. Even though LB is cutting the identical groups starting from the same place, it is changing its mind what order to cut. 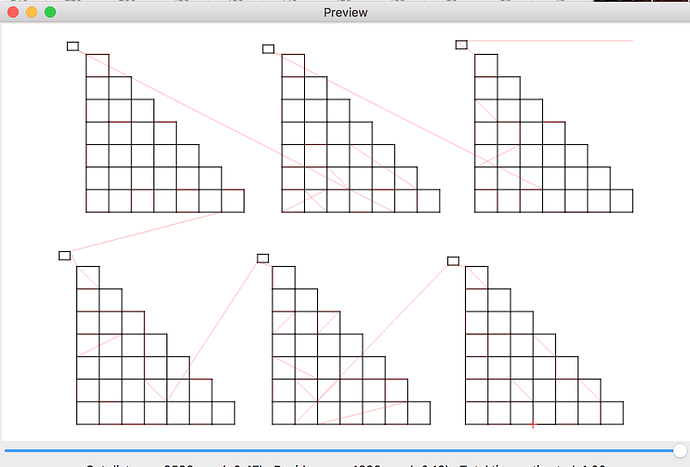 Maybe it’s because I positioned all of those start-point squares manually. So I’ll start over and duplicate the design and the start-square together to guarantee that the start-point squares are in the same relative position to the design. Now designs 2-5 are identical, but number 1 is different. It finishes in the lower right, whereas the other 4 designs finish in middle of the top. 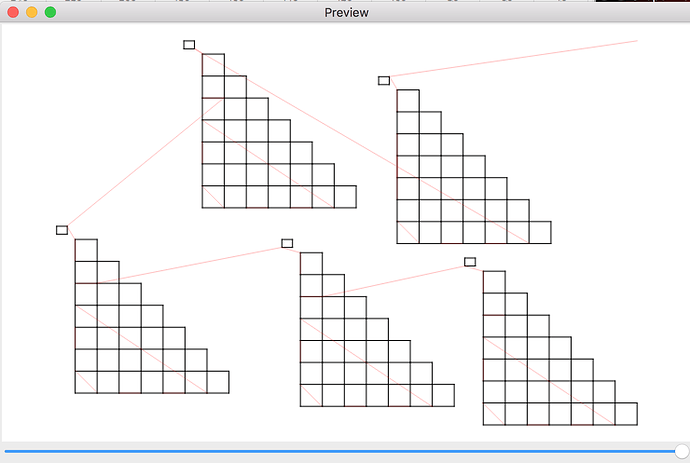 Here’s the optimization settings for that one, the best set I could find. Selecting other options makes each design cut differently again. 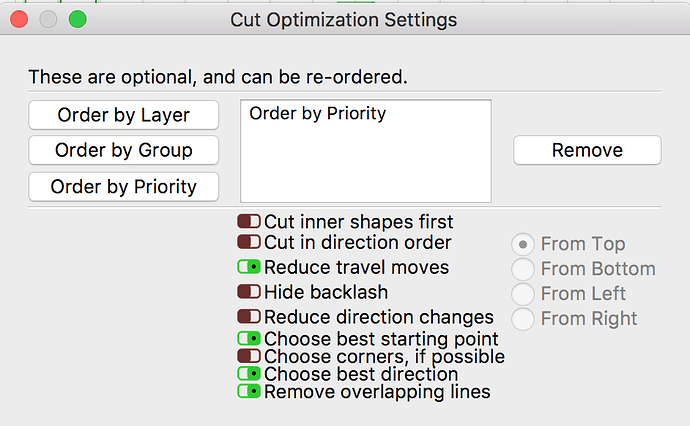 Why this? Well, maybe LightBurn knows where it’s going after cutting a group and changes according. So now I’ve added an end-point square as well. I took the original design, added two squares above it, and replicated these two squares + one group. 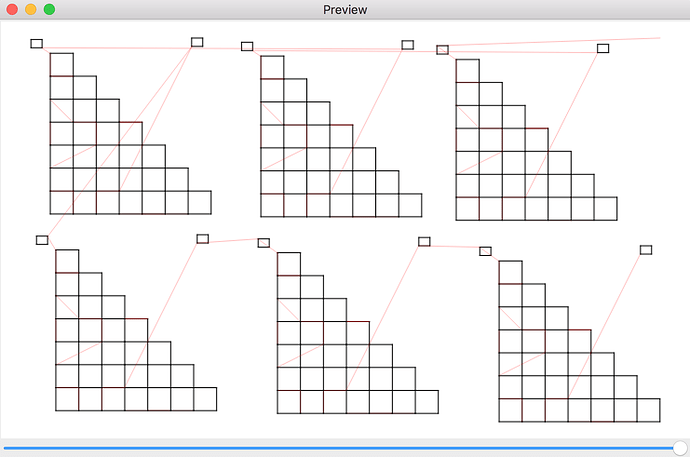 So this is a workaround I can use.

However, I figured that out too:
(1) Make one design and two squares (start-square and end-square) and set the priorities 1-2-3 so it cuts start-design-end.
(2) Group all three together
(3) Duplicate this group all over
(4) In optimization set it up so Order by Priority is first and Order by Group is second.

Caveat: If one of the lower designs is too far to the right of the starting shape, the cutting path in this group is different. I have no idea why it would do this, but it’s something to watch for. You can see the lower right design has a different cut order. 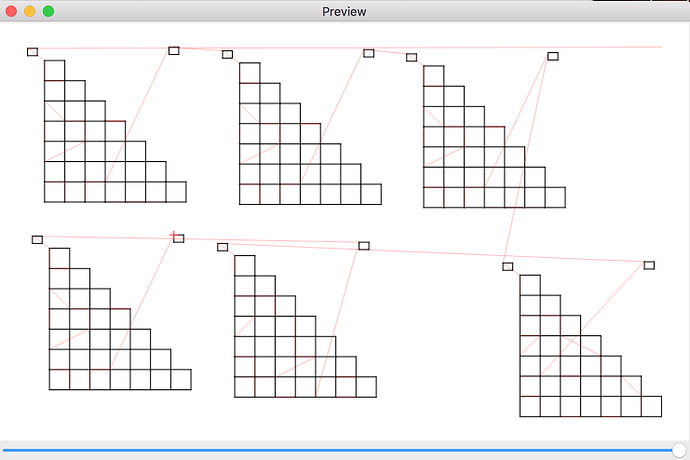 So, is there a better way to do what I want here, where the start and end points in each group, and the entire cutting path in a group is exactly the same, or is this best I can do for now?

My first question would be why does this matter? Not trying to be dismissive at all here, I just don’t understand why the order of the cuts is important within a single group as long as everything gets cut out and nothing drops or is damaged.

I see you found my other post where I’m working on alignment problems. Yes, I may be the only person in the world who cares about cut path, but it is for a good reason.

I have another design where when I make multiple copies, my cutter cuts some of them perfectly and some of them with misalignment. Lightburn is using different cut orders in each design. If I can get identical cutting paths in each group, I believe I can use the cutting order from a design that cuts perfects and stick with that route for each of the groups, thus producing a whole bed of identical perfect products. I hope!

I now have working files for my two most important designs, with start- and end-squares, and am getting great results. It means placing start and end squares to cut first and last (and setting cut direction on them), and then trying it out, moving the start square, trying it out again, and again, and again, until I get lucky and land on a perfect cut. Then that file is good to go. Just need to solve the problem of why I’m getting alignment errors, or I will be cursed with doing this for every single thing I cut…