Is there a GlowForge equivalency chart?

I found some files on etsy made for glowforge and they have those crazy proprietary specs on what the speed and such should be. Is there a chart or calculator. for the rest of us to come up with a best guess?

Please note: I do not have a Glowforge so I cannot test this… However:
In 2017 Glowforge changed from what was actually Inches/Minute to their imaginary units. At the time they released a Google Spreadsheet that would allow you to convert old units to new. Fortunately, that means that with a bit of algebra I could reverse the conversion. It is anything but a simple conversion.

Where A, B, C, and D are static conversion factors (different for cut vs engrave) and X is the “Glowforge Units” value.

Fear not though! I made a new Google Sheet that does this for you

Make a copy of the sheet for your own use and convert away.
As noted: I just converted the math. But don’t have a way of testing. I did confirm that my values convert back to what’s expected for the GlowForge so it should be good.

As for power: That’s a whole different issue that I can’t find conversions for.
But in general, you can probably just use the value given as a percent and be close if you have a 40W laser. Honestly, that part depends entirely on your specific machine, how much power it has, and what the power limits you set were. For example, I have an 80W tube that basically won’t fire until about 15W o output. Meaning 1% in LightBurn is 15W and 100% is 80W.
Point being, assume the GF value is a scale between 0 and 40W, figure out the wattage intended then convert to your machine with its own scale. But even then that will only get you close.

Thank you so much! I realize that this is still a shot in the dark, BUT IT IS A GOOD ONE! I will test and report back so that others can be more sure of the outcome. If power is the only variable we need to dork with, we should be in GREAT SHAPE!

No problem. And yeah - the power will ALWAYS be variable unless you are using the exact same laser. So I wouldn’t worry about that one too much. But we can at least convert the speed units

What part of the “LINES PER INCH” if any is included in that fantastic spreadsheet you sent me?

None… this is speeds, not scan intervals.

Of course, thank you very much. When I figure it out, I’ll share it for all to see!

Not sure what you are trying to figure out with lines per inch. LightBurn already has that setting: 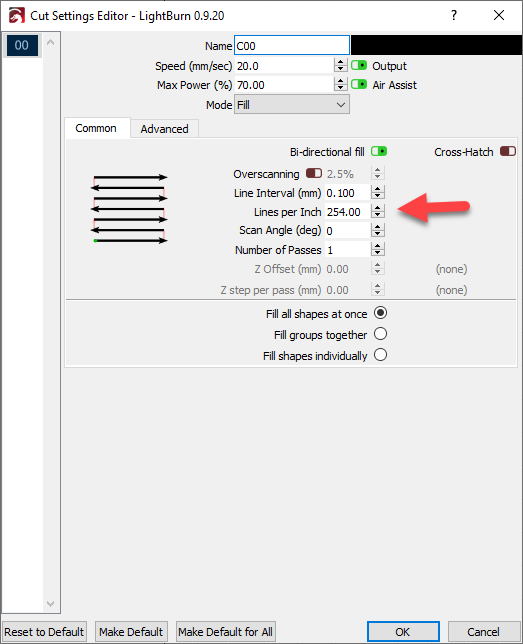 Wow! Major oversight on my part, thank you! This is why Lightburn is and WILL continue to be the standard. We help each other in obvious and NOT so obvious ways. Thanks Again! 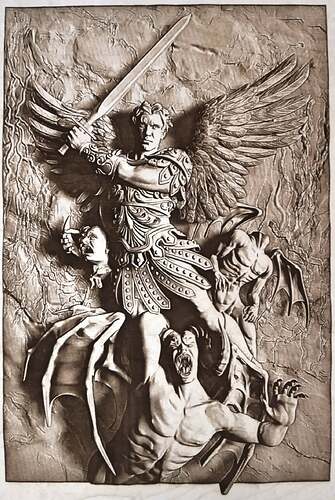 This is the GlowForge engraving I am going to try to replicate on my Boss. Any suggestions would be helpful!!!