Is this a hardware or software issue?

I have this issue I haven’t seen anyone talk about. I have a template with 9 squares that I’m cutting for use with engraving coasters. Imagine 9 squares to be cut. For clarity I’ll arbitrarily number the top row as 1,2,3 the middle row 4,5,6 and the bottom row 7,8,9. I’ve ordered them to cut squares 1,4,7 for the sake of this demo. It doesn’t matter, the problem shows up no matter the order.

This is an xTool D1 diode laser with a 20 watt head. I’m running it at 600mm/m and 100% power. In the video you can see that it cuts square nicely. Then it speeds up to travel to square #4. Looks to be about 2,000 mm/m. But, it doesn’t slow down on side 1 of square #4. And because of that it just engraves. Once it changes direction it slows down to the proper 600 mm/m speed. If I’m not watching closely it looks like it cut but I don’t figure it out until I pick up the piece and see that it’s not cut.

This is a simple example. But it does the same thing on very complicated cuttings with hundreds of cuts. Many lines just engraved but not cut. It’s much more subtle if the are small lines and I don’t see it until I pull up the part. I have to then spend a lot of time with an xacto knife to finish the job that the laser should have done.

The order of cutting isn’t important. I can change the order and eventually there will be these kinds of mishaps.

Any suggestions would be appreciated.

Can I assume that the squares are all part of the same layer and are closed shapes? Can you post the .lbrn file here to take a look?

Also, can you save Gcode for that same design and post the file here? You will need to change the extension of the file to .txt to be able to upload it. 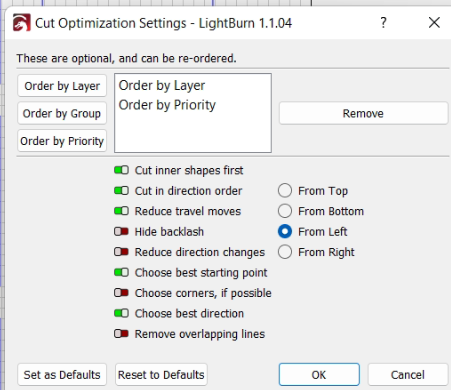 And, the Gcode… (This gcode cuts square 4,7,1 but the results are the same-- fast travel until direction changes)
coaster template.txt (883 Bytes)

What this likely means is that this is a firmware issue on your laser which wouldn’t be the first.

Do you have the latest firmware installed on the controller? I know xCode has resolved a number of these issues although it seems some of these persist.

I’ve been avoiding firmware upgrades because users have had a lot of trouble with them. But it’s been quiet lately so I’ll bite the bullet and give them a try.

Thanks for looking at the gcode.

From my observation it’s generally a net positive. As in two steps forward but one step back. Hopefully eventually they get there.

Thanks for your help. I upgraded the firmware and the problem went away. Much appreciated.