Hello, I am using Inkscape, and I really want the output to be the same as the svg on Inkscape but when I import the svg on Lightburn, the white background became transparent and the lines are overlaying. Could you please help? 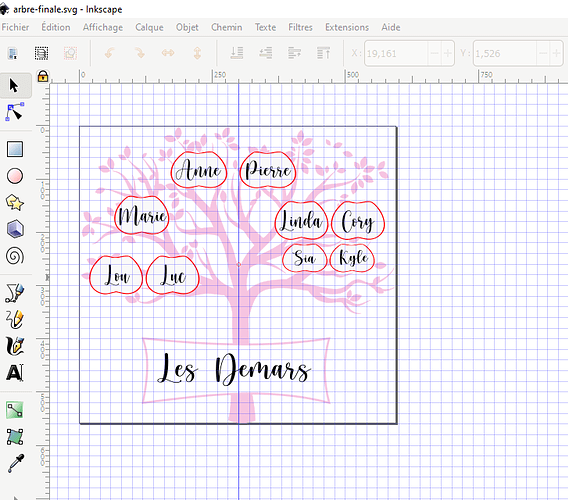 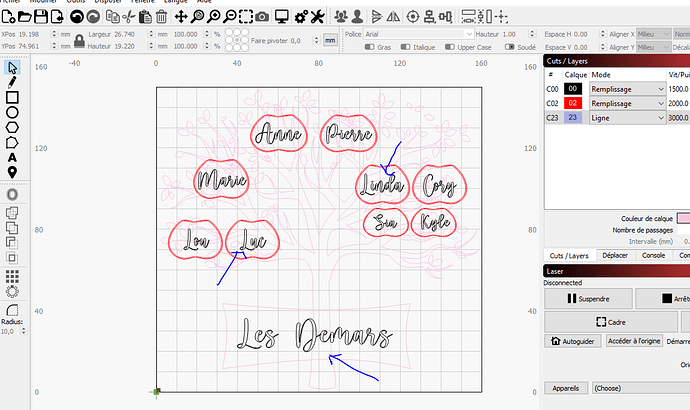 The problem you’re seeing here is that you’ve painted over shapes with white, but not actually altered the outlines, and LightBurn only looks at the outlines. The lower box with the name in it also appears to have stroke width, which is also ignored.

To make this work, you’ll need to cut the red shapes from the tree, and weld the lower box for the name into the trunk of the tree.

That could be done either in LightBurn or in InkScape.

In LightBurn, you could select the lower box and the tree and choose ‘Weld’ or ‘Boolean Union’ to merge them together, but you’d likely also want to convert strokes to paths in InkScape before that step to get the thicker outline. The red shapes would need to be cut out from the tree graphic, and I’m not familiar enough with InkScape to know the command for that, though I’m sure it’s possible. It’s likely something like ‘combine’ though there are probably boolean operations in InkScape too.

Thank you, it is working, it took some rework on inkscape(with the boolean operation “substract”) but now it looks great.
Thanks for your help.