I do a ton of these for hats, working on an order of 300 right now. I have to wipe each patch off before I send them to my buyer. What do I need to do to keep them cleaning during lasering? 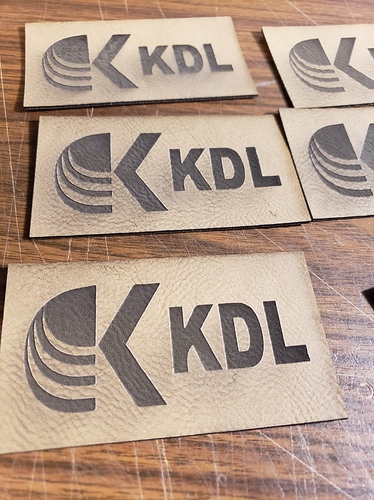 For some of my work, mostly the 3mm birch ply, I use paper transfer tape applied over the entire surface, which peels off easily. I use a brayer (burnishing roller) to ensure a good bond with the adhesive.

For acrylic, many have suggested liquid dish soap mixed with water, allowed to dry, then washed off after the burn. When I first learned of this method, the “let dry” portion was not included. I’ve since merely used a foam brush to coat the acrylic with liquid soap/water solution and it’s worked well enough.

If those patches are leather, perhaps a leather cream or similar protectant would give you an easy clean-off if burned while the cream is still wet?

It’s leatherette, not sure a leather cream would work.

I wasn’t sure how leatherette is made and a quick search suggests that it’s a form of plastic. As such, the soap and water solution would probably work.

On another note, some of the 'net sources suggest that it’s a form of vinyl, which is a risky item to be hitting with a laser. Vinyl degrades into chlorine gas, which will eat up quickly the metal parts of the laser, as well as the soft parts of your lungs.

There’s a possibility that it’s also a polyurethane, which isn’t a problem, according to multiple sources on the internet.

You can do the hot copper wire test on a sample piece to be certain.

This stuff is advertised and sold as laserable. You can get it from JDS. I believe it’s made just for the laser.

That’s encouraging information. As plastic, it won’t absorb water, and that means the dry or wet soap solution application method should do the job.

Just use 90% or better alcohol to clean it after lasering, Works fast and easy

I’ve been using a towel with water, it’s just a pain in the butt doing 300 of them

I engrave a lot of leather, in a wide range of different colours, every piece I clean off after lasering, to put masking tape on and then have to remove it would take too long, most leathers just require a wipe with a damp sponge and a dry with a soft cloth, Some might then need to go over with a wipe of Isopropyl alcohol to get rid of any stubborn bits of soot.