Just received and have been playing with the 90-degree 5MP Lighburn camera on a 700x500 “red and black” Chinese machine. I had been considering various other USB cameras, but decided to go with the officially support LB camera for support. The camera is mounted ~720mm from the bed, roughly centered on the hood and adjusted to point straight down.

I am, however, running into significant problems with exposure; when the camera is somewhat happy with the exposure, the human eye has trouble. Which it’s bright enough for the human eye, the exposure is totally blown out.

I have tried different levels of lighting (I’m in a windowless garage with just ceiling lights), and simply can’t get a reasonable compromise. I’ve tried with a total of 120W LED through the garage opener diffuser up to 200W (plus the garage door) LED ceiling fixures and with/without an LED utility light on the hood of the machine. Note that I have a very tall garage ceiling, about 12’

I can get generally reasonable exposure when doing the lens correction, not-quite-as-good doing the alignment, and then using the camera overlay it becomes unusable with the white surface obliterating black ink/marker as a test.

There seems to be an exceptionally narrow window of contrast and brightness controls and the amount of ambient light to make the camera happy, “happy” changes when I get to using the actual overlay usage. The images are washed out and out of focus (although zoomed much further in).

Do I have a flaky camera, or is this expected behavior?

I may have at least a partial answer. No lens for the camera(!)?

Looking at the images of the camera on the web, there is a small plastic cap/lens over the sensor. Mine arrived in a bag with “90°” marked on it and what I originally thought was an internally focussed sensor with protective film on it. No “cap”/lens.

I double-checked the original packaging, and nothing there either

If this is the case, the sensor is pretty close to native 90 degrees and produces a usable image without the lens. 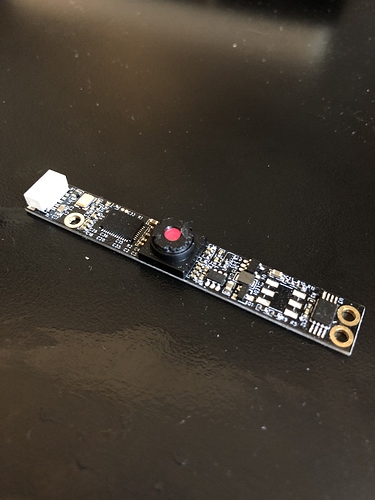 The ring with 6 notches is for focusing, and the reflective red glass bit is the lens. The cameras seem to do poorly when there is a wide brightness range in view - for example, a white piece of paper surrounded by a black bed makes the white blow out. If you put a few pieces of paper around the item on the work surface to even out the lighting it tends to help the auto-exposure. Give that a try and let me know if that helps.

We’re working on a replacement for the capture library for Windows that should give us more control, including capture resolution and exposure adjustment.

That’s the camera I have. Is the focus ring adjustable or locked down? I don’t want to break a part with a tiny mechanical connection to the PCB. If the focus is off that could explain part of the issue as well.

Focus is manual - It’ll be a little stiff initially, but it will move without a lot of force. Hook a fingernail into one of those notches, hold the square plastic base with your other hand, and turn the lens about 1/4 turn at a time.

Thanks. I’ll try both this afternoon

On the flip side, I didn’t even try RDWorks, I ordered LB before the laser arrived. Very happy with it. Nice job! Creative options galore; 3 Christmas presents out with a short learning curve.

The camera will be the icing on the cake for doing some detail work.

The focus made a significant improvement. I also used a sheet of white stryofoam which helped the exposure. It’s still very finicky, needing lighting adjustment during calibration, but it worked. Not practical to keep the background lightened up, though.