We have been talking about USB to USBc adapters and cables being potentially problematic. I’m assuming the USBc is on the Mac side. Would you mind testing the Mac to Atomstack connection with the USB cable that you were using on the Windows 7,10,11 computer (I’m making another assumption here too because it could be linux.)

I downloaded light burn on the windows computer and works perfectly on there. I might just switch all my stuff for it over to there to avoid any further hassle with it

I’m glad you have a solution, yet It should be working on both computers for you.

For what it’s worth, we’re testing two fresh LightBurn installs on Ventura Mac OS laptops right now. One Apple Silicon and one Mac. I hope we find the reason.

Testing was successful on both attempts in Ventura 13.1 - We’ve committed to further testing before the 13.2 update.

We used a Hyper Drive thunderbolt USBc hub for Macbook pro (for the USBc to USBa).
Did you have a similar adapter?

Did you reflexively click Ok when presented with this screen? 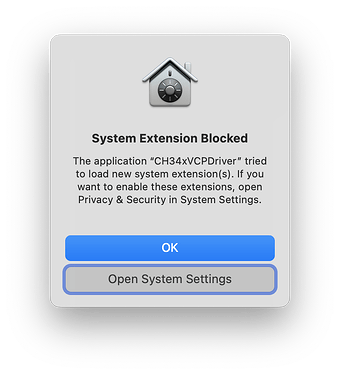 or cancel at this screen? 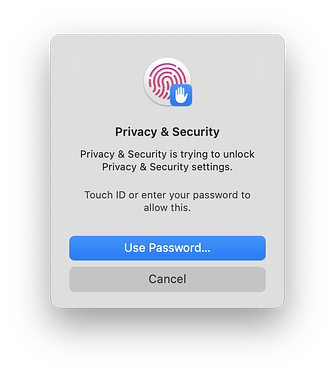 I’m not really a Mac enthusiast so it was an adventure navigating something new.

I did not use an adapter like that mine is just a short 2 inch cord with a female usb port and a male usb c port. Also neither of those screens popped up when attempting to connect.

Not while attempting to connect. Well before connection was possible.
You should have seen these when you were installing the CH340 driver.

I have the same problem. But the same software and hardware works perfectly on two other Macs. I tried also everything. So far no luck.

well - I have 3 MacBooks - two are working fine. one is old and has Monterey - my other is a MacBook Max with Ventura. the 3th is also working with Ventura. It drives me crazy. Both older Macs have the same extensions. So it’s a riddle to me

I have the feeling the CH34x Driver might be the problem. Mac Ventura does not need any drivers - I read some where…

I spent part of the previous week getting a 3018 GRBL CNC device to connect through the USB port to an Intel MacBook Pro and an M1 (Apple Silicon) MacBook Pro. Both were running Ventura 13.1, neither could see the serial chip without the driver installed.

That’s how I got those Screen Captures.

It was an adventure for me.

neither could see the serial chip without the driver installed.

Did you happen to check if the hardware was visible with a missing driver in System Report or equivalent?

Did you happen to check if the hardware was visible with a missing driver in System Report or equivalent?

Nope, missed that, but with them both freshly upgraded to Ventura 13.2 maybe I’ll have an opportunity to re-test.