Laser firing below where frame shows

Need some direction on what our problem may be. We are trying to burn in clock numbers from a clock SVG from online. We brought in the image, did image trace, and ungrouped all the numbers to speed up the process. However, when it started the “12”, it burned the 2 and dropped down further than the 2 to start the 1. The next attempt we grouped the 1&2 for 12, 1&1 for 11, and 1&0 for 10. When we started the 2nd attempt, it dropped the 11 lower than the 1 even though the picture has them on the same line.

Our final attempt was to group the 1&2 for 12, the 11 & 1, the 10&2, 9&3, 7&4, 8&5 so that it would burn each group on the same line. While this added about an hour to our job, it does keep the numbers on the same line like we want. However, we are still having the issue of the laser starting a group lower than we want. We have a circle frame on the project to keep us inside of the boundary we want and when we frame the project, we are getting roughly 1/2" from the edge for 12, 3, 6, & 9. The frame is showing us the number placement exactly where we want but once started, the laser seems to be dropping down lower to start the project. We thought maybe we were looking at the circle frame when framing the project but the laser never touches the bottom edge of the barrel head when we frame the job. The picture you can see where it fires on the edge for 6. 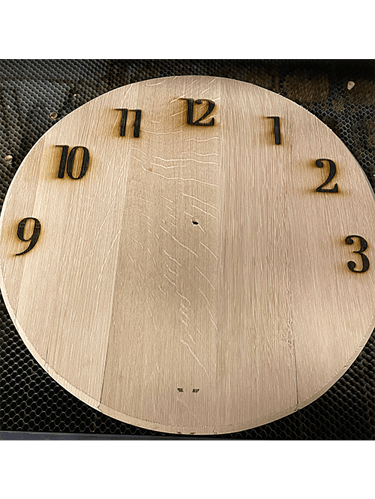 Macs have issues with communications at time, are you connected via USB or Ethernet?

That’s a question that’s likely to be asked, although probably not an issue here…

It’s nice, if possible, to be able to examine the .lbrn2 file.

IMHO, the letters are pretty burnt, is that the effect you want?