Hi all,
had a Chinese 900x600 90w laser which I dismantled and used the RDC6445G and glass tube to build a new machine.
The old setup had a E-Stop button and “quarter turn” type switch which use to isolate the laser. For the life of me can’t remember how that switch was connected to the controller

What would be the best practice / advice for a laser tube isolation switch??

On my china blue, that switch handles the mains. When it’s off no mains voltage…

Hey Jack,
Mine was wired E-Stop to mains, and that switch use to turn laser power on/off.
Looked through the manual, and can’t work out where that could have been connected … Should have taken notes , but I didn’t !!

Wondering if they used this switch in line with either pins “PWM1” or L-on1" ??? Would that isolate the laser?

Power comes into the machine and passes through the e-stop. When it’s open there is no power on the machine

line with either pins “PWM1” or L-on1

It does NOT connect to the controller. It’s meant to turn all voltage to the machine off. It is an emergency stop and interrupts all power to the machine from the mains.

It does not connect to the controller in any way.

What @jkwilborn says. It’s best to use it to just disable power entirely. This anticipates a failure mode where the LPS decides it’s going to fire despite the fire command being inactive, and the WP safety is supposed to be active. If it has no mains power, then it’s impossible to fire. If it has mains power, I can’t rule out that failure mode, even if it seems unlikely.

When done this way, you probably want to avoid using the e-stop regularly, like it was the power switch. Few people do that, but I’d say don’t. This can make a significant arc in the switch as current turns on or off, and it can wear the switch’s terminals. The e-stop isn’t guaranteed to be built as a high-endurance, high current AC switch.

What many have done is to route it via a ssr. Of course, you have to provide some kind of power such as a small transformer.

There is little problem with 240v mains but when you drop that in half for 120v the current has to double for the same wattage. These switches on 120v machines are usually at about the max.

@Dannym explanation is sufficient. My main power is also controllable by a switch on the machines side. I never use it for general power control.

Hi Jack
Thanks for your advice, but would like to clarify a couple of things;

Since you live in a 240v world, the ssr option is moot.

You’re assuming what the emergency is… most of us don’t know and if we did, we’d fix it before it became an emergency…

The idea of a “Emergency Switch” is to disable all power to the device since it’s an ‘Emergency’.

Wire it any way you wish, it’s your machine and the resulting consequences also belong to you…

I would never use an SSR for this! They generate significant heat, they interact with inductive loads, electrical isolation is complicated, and when they fail, they fail as a short.

Just use a plain ol’ 24VDC actuated relay. DPDT so you can disconnect both hot and neutral or both hots of 240VAC and you use the normally-open contact.

You just put one side of the relay coil to the 24VDC+ power supply, and the E-stop switch only has to ground the 24VDC to enable the power to the laser head.

We’d prefer not to put the door interlock on the LPS. One because it’s not instant to disable as the caps discharge, although it is pretty quick. Main prob is that the LPS and relay contacts are stressed to cut and reestablish power, so for that level we just control the enable signal pin.

So you are telling him that a ‘mechanical’ item that has to physically move and arcs most of the time is more dependable than solid state equipment.?

I think there is more than sufficient data to show the mechanical relay is comparably a piece of junk up against a ssr as far as dependability, holding current and heat. It doesn’t generate it’s own emf field on energizing or generate a reverse pulse when the field collapses. The cost of a mechanical relay is reaching or exceeding that of a ssr. Add to that ssr are pretty idiot proof.

They have no problem switching the in the 50 - 60 Hz range, there is no inductive issue with the mains. I run motors on my laser with one, no issues there either.

I’ve been working with them since the early 80’s and can recall only one failure of a ssr when the equipment it was running shorted out and put a couple hundred amps across the switch, it became the fuse and blew… I’m sure they fail, but there is no comparison to mechanical relays.

I have replace an uncountable number of mechanical relays. An surprising amount of them had mechanical failures that caused to ‘stick’ in the energized position, resulting in at least one fire. On a transmitter on top of a mountain I used to maintain, one of the relay coils shorted and it started a fire inside the transmitter… It was a 4 hour drive just to get there, wish that would have had an ssr in it.

A ssr switches on at the mains zero voltage level (read ‘no current draw’), unlike the random connection nature of a relay. It is much more easy on the equipment to have power enabled at a zero voltage/current load on the mains.

They can take a heat sink for the higher current loads, but they only draw about 20mA about 1/10 as much as a coil and no emf or back emf fields.

I use them anywhere I can, haven’t lost one in over 20 years. This has been in my machine since I received it, don’t expect it to fail anytime soon either. Ran both exhaust fan and supplied compressor, hence no heat sink, just mounted on the chassis. 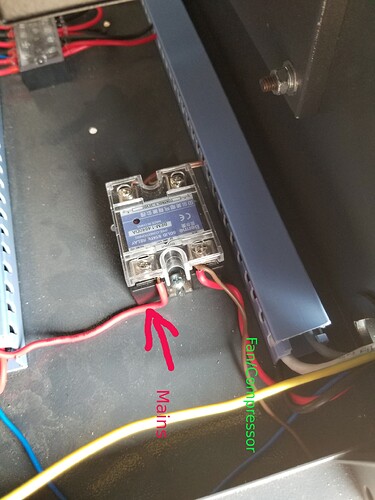 Do you actually have a lps on yours? I thought that those rf lasers was a ‘all in one’ box ?

I had thought the idea was to power down the whole machine… Your suggestion assumes you keep your 28v supply on all the time. That’s why I noted the requirement of a full time supply with an ssr, same with a relay except it’s going to draw more power.

The beauty of being free, you can choose what you wish…

Jack
Our 240Vac consists of an Active, Neutral, and an Earth … we get fed 240V on a single wire, just like the rest of the world except US

Let us know how things work out…