I’m trying to engrave a couple of images on wood, I’ve used a different program and it’s running fine but when I load them up in lightburn I get strange “cutting” lines which are not even horizontal but seem to get together at some point outside of the working area, anyone know what i can do to prevent this from happening? 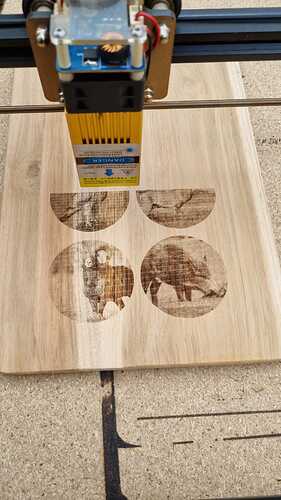 Are you using pre-dithered images? (from a tool like Imag-R or other pre-processing script?)

If so, make sure you have the pass-through option enabled in the layer settings for the image.

If not, check to make sure there is no dirt on your Y-axis rails or wheels, as that could be causing those gaps too.

I did load the pictures in photoshop to crop them to a round one but other than that I did not change anything. I’ll actually give it a try tomorrow with the original picture to rule out that it changed anything.
I have tried to enable pass through but it just makes the printed image to be very unclear.

if you engrave it with another software, like LaserGRBL you got that lines?

I have saved the project and burned it again on a different laser today and the lines did not appear, this is a co2 however and the laser where the problem occurs is a diode laser (I don’t know if it makes any difference) I will however try it on the diode laser later today with the original image and try it with laserGRBL

if you got same lines even with LaserGRBL i think that’s a mechanical issue in Y movements, check your belts

thanks for thinking along, I tried the original image and a different one in lightburn AND laserGRBL and both appear to have the problem. The day before it was actually working fine… After running some tests now, I think indeed it has to do something with one of the belts or at least the movement on them but I’m not sure with which axis.
I have tightened the belts on the Y axis a little as the seemed rather loose but there was no inconsistency on it, all teeth were still there and the wheel running on it was still intact as well.
I took a picture of the tests I did. the square ones I made with laserGRBL with low detail. I stopped the job twice and let it start over with the image from the same spot (made that home) the lines seem to go further where they left off but are also further apart.
The round one was done with lightburn again in 1 go with a much higher detail.
So could this possibly have to do something with the Z axis or am I wrong and is it actually caused by the Y axis? 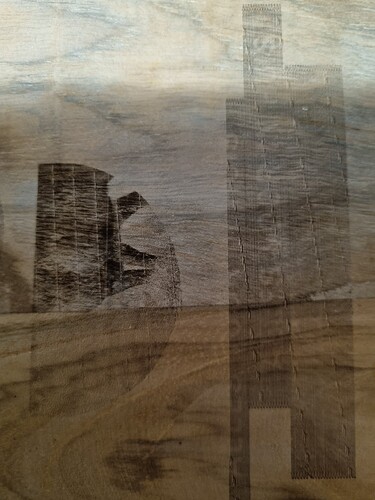 is hard to reply if i don’t know in which way this is engraved, in first pict you have uploaded was taken with the machine and there was simple to think that it was an Y problem.
You can, nevetheless, try another thing, in LB engrave this image with 45 degrees of scan angle and let’s see if the issue is still present

Ah yes, I knew I forgot to mention something. The first image went from left to right but my 2nd got turned automatically. The last image should be turned to the right, as the image is now the laser went from bottom right to top right. I’ll try the 45 degrees scan angle later and show the results.

Bottom image is from left to right again, image above that is with 45 degrees scan angle. I found out before I started one of the screws on the side of the frame was missing so I replaced it, that seemed to have made things less worse. 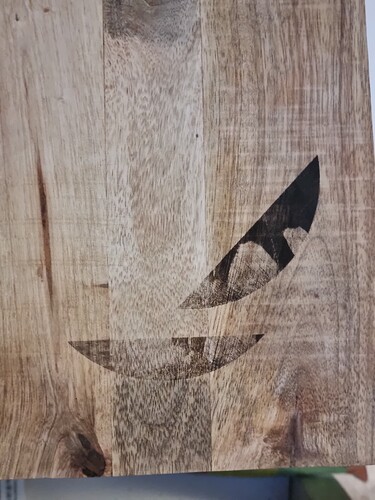 After that I have tightened the Y axis belt a little bit, now the problem seems to be fixed. 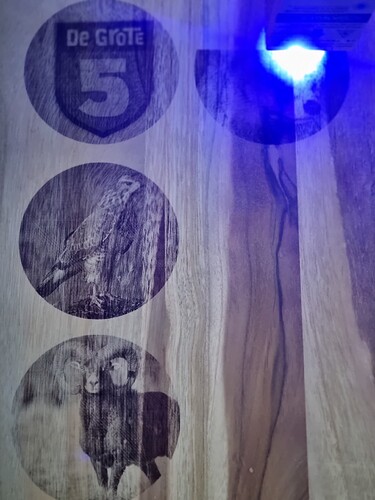 Thanks for pushing me in the right direction and all the help I’ve been getting!

Glad to see you have fixed, i knew was a mechanical problem