Hello Lightburners, new user here.
Recently bought a Cohesion3D Laserboard for our Voiern WR4060 laser cutter, after the original board and software turned out to be dissatisfactory.
Overall it’s been a big improvement, but there’s some issues we just can’t seem to fix.

One issue seems to be related to Smoothieware, as it is not present on GRBL, nor on the original board. This is an issue with random shifting during engravings, regardless of settings, clustering, speed, etc.
In the image below you can see the shifting marked with red circles, normally it’s far more pronounced, but we ran this image at “absolute failsafe” settings, speed 150mm/s, max acceleration 250, 10mm overscan, loaded from SD card, to rule out any configuration issues.
Since it shifted twice during that “failsafe” run it does not seem to be configuration-dependent.
We’ve tried everything we could think of to resolve the shifting issue on Smoothieware, including swapping out the motors/cables, adjusting the belt, adjusting the settings as per above, trying with and without clustering, etc, but as long as we’re running Smoothieware it remains present.
While we’d love to get this fixed, it’s not the main focus of this topic. The shifting is seemingly entirely gone on GRBL, and vertical lines are much tighter too, even at higher speeds, but we’re still struggling to get the same image quality on GRBL.

Which brings us to the main issue: On either firmware, the laser seems to sometimes “sputter” when turning on, or rather, it seems to pulse at a much higher power than it’s supposed to, effectively punching holes through the material it’s engraving.
When it’s on constantly, like when engraving a grayscale image, it seems to largely be fine except on the overscan edges where it turns on the laser.
When it’s rapidly turning on and off, like when engraving a halftone image, it frequently just runs way higher power than it’s configured to.

Even when we reduce the max laser power in Lightburn by so much that the “regular” engraving isn’t even visible, it continues punching holes when it’s turning on the laser, leaving only a field of holes.

We’re not sure if this happened on the original board as well, but it happens on both Smoothieware and GRBL at least (although seemingly more on GRBL).
It seems to happen more frequently on lower speeds, presumably as there’s more time between the laser turning on and off.
The attached image is an extreme example of this, as it was run at very low speeds.

The last image is a full testsheet of stuff we did with both GRBL and Smoothie, in case someone spots something we missed. If nothing else, it shows off we managed to get the power modulation working well-ish (the top few gradients) and managed to kind off get a greyscale engraving to come out “fine” and without holes in the bottom left.

Image 1: Example of both shifting and hole punching. 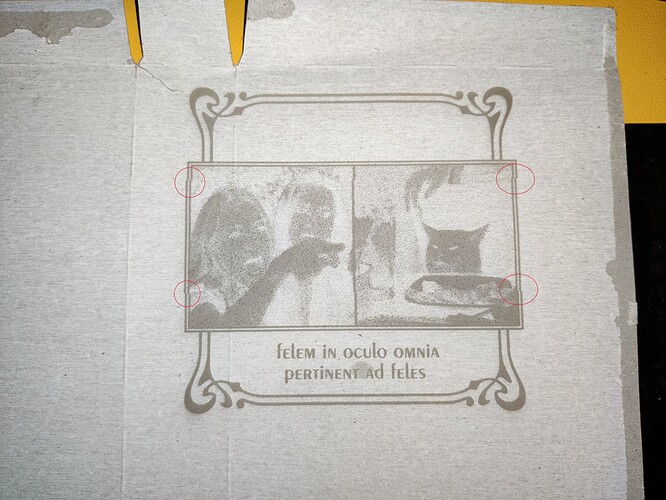 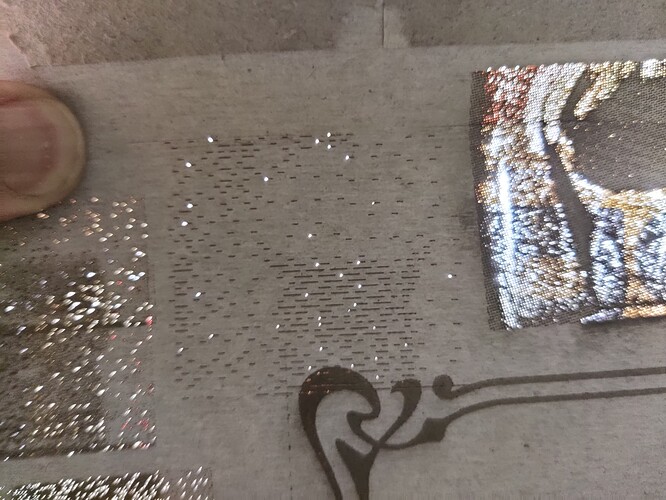 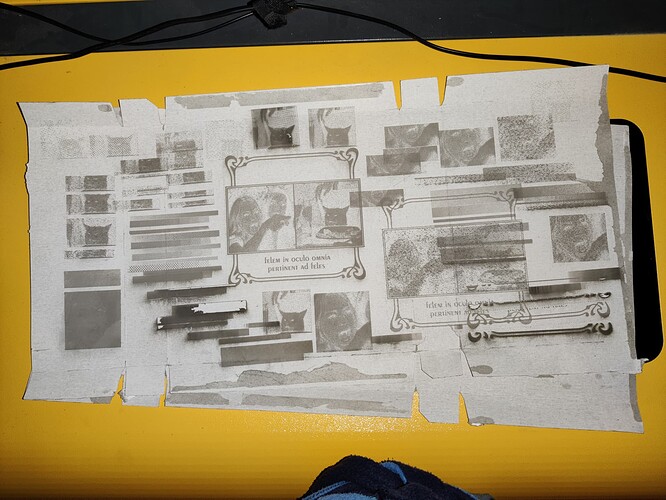 Any suggestions on what this could be and how to solve it are very welcome, we’re pretty much out of ideas ourselves.