I do a ton of name cutouts for my wife’s shop. I LOVE the lead-in feature, but I’d really like a way to edit the actual font to so that lightburn knows which node to use as the starting point for each shape. My current workflow is to type the name, adjust spacing a bit, weld it, and then set a lead-in start point for every letter or hole in the letter (a,b,d,e,g,etc). If I don’t set it, it’s pretty common for it to choose a node where the lead-in cuts into the main piece. So I have to select all, ungroup, and then go manually set the start point for each shape.

I occasionally edit my cursive font in FontForge to fix spacing issues. I’m just wondering if there’s something I can do next time I font edit that will tell lightburn to “always start the cut on this letter at this node”. The more I think about it, I don’t think it’d be possible since by the time lightburn is told to cut it’s been converted to paths. I’ve just had to manually change the starting point on the letter a so many times that I’m finally reaching out to the community to see if anyone has a better idea for a workflow. I’ll throw in some screenshots in case a visual is helpful. Thanks for any advice or insight you may have! 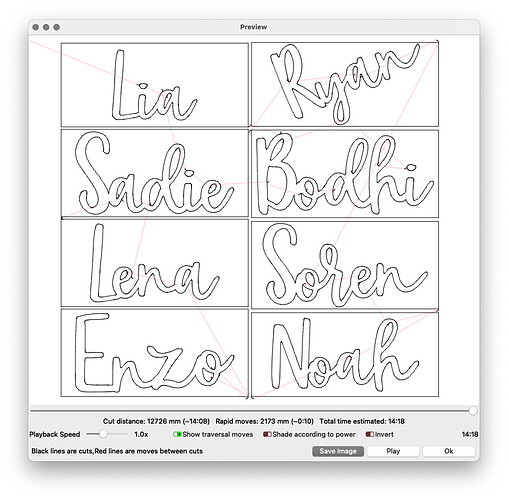 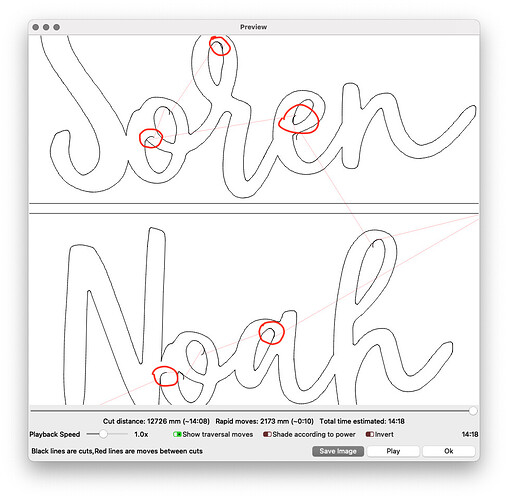 You can use the ‘Start Point’ editor to change them. However, we don’t have a way to set multiple start points on a single object, so you’d need to Convert to Paths first to be able to manually force them.

Part of the issue you’re having is that the code that automatically chooses the starting point doesn’t look to see if the lead-in will fit. We’re going to be improving this in the future.

Ooo happy to hear a lead-in check is in the works! But yeah that’s what I’ve been doing – make paths, select all, ungroup, manually set start points.

So if the actual font looked like this (with lead-in turned off): 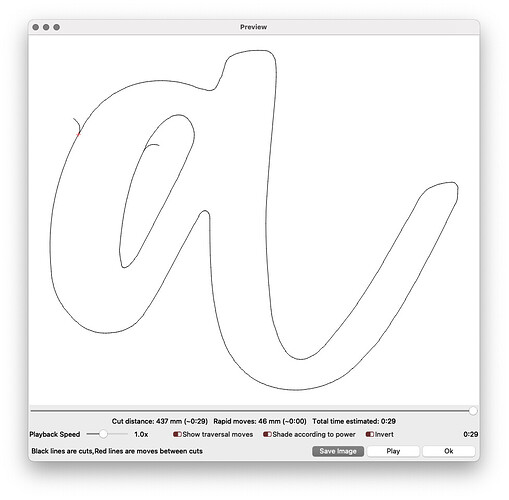 If they’re just cutting lines, and the loops aren’t closed, that would likely work, but it might choose to go the opposite direction (starting at the end point).