Lens Holder: I Could Try My Lens in a Different Position

The lens holder on my new laser has two places to install the lens (one on the upper end / one on the lower end). My old laser did not have this. My old laser, I always used 63.5mm (2.5 inch) focal length lenses. Therefore, the only workable position for that lens would have been in the lower end of the cone.

So then I got to thinking… should I try out the 101.6mm lens in the lower holder? I like the idea if having more clearance from my work piece for sure. It would allow for more options for hold downs as well.

I use conditioned (dried) compressed air to my laser (on an independent regulator), so where I see that I may need to increase the flow / pressure to prevent combustion - I have that ability. The added distance would probably not allow for as fine of a stream of air. But testing will have to see if that makes a negative impact.

I am curious if anyone else has tried this. Below is a picture representing the option: 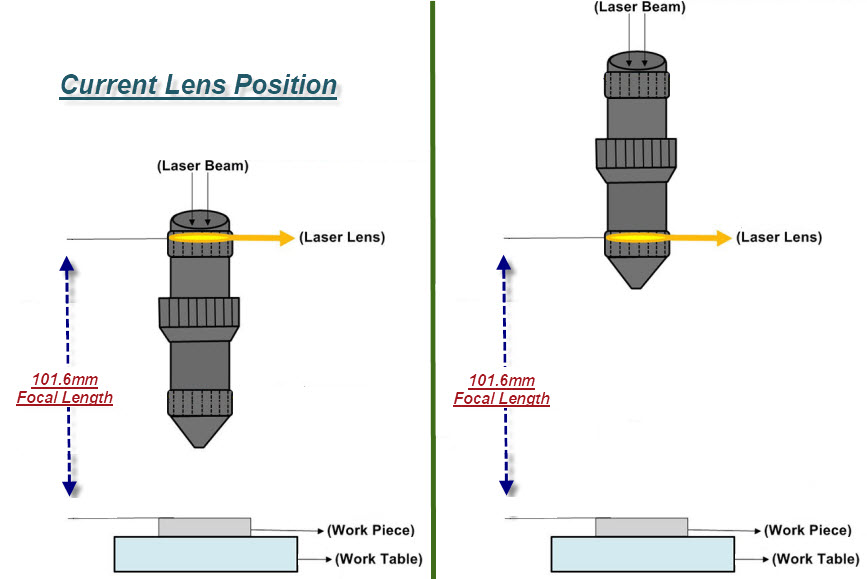 I should also add that I have 18 inches or more of Z available, so that isn’t a concern for me. I was also thinking how the extra clearance would be good while using the rotary.

Many times, when using the rotary, the diameter of an object isn’t even as large as the rotary. This creates a higher potential for head crash into the rotary itself.

Also… for anyone curious about focal length impact / uses, Epilog has a good FAQ on that. (I don’t use an Epilog Laser)

Thinking about this today, I realize that I may need to buy some spare laser lens tubes. I was thinking that if I run the 101.6" in the lower position, the beam may not have converged enough to clear the opening. Maybe something I might have to drill out a bit.

I believe the top position is made for that longer focal lens, IMO is that keeping your nozzle closer to the workpiece with air assist then it helps blast out cuts with more efficiency. The loss from the increased air gap will only render the air assist action ineffective. The more pressure you get in the cut the faster the ash blows out and lets laser burn more. Make sense?
And yea it probably wouldn’t converge within any reasonable distance from the tip if the 101.6 is in the low spot, at least not worth whatever gain I get of usable focal cut depth.

using the 2nd solution is a recipe for failure : as the cone is largest near the lens, there will not be enough space in the nozzle bottom hole to let the beam pass fully.

so, the sides of the beam will hit the inside of the nozzle and be reflected, and a large part of the cutting power will be lost.

also, you will lose a lot of airflow, which is bad for cutting (this is ok for engraving, but you definitely don’t want a 4" lens for engraving)

Yes. I mentioned that as being my prediction as well which is why I purchased some spare lens tubes. I will increase the opening size in the nozzle.

Also, a 4" FL lens actually engraves exceptionally well. I have been surprised. I have plenty of 2.5" FL lenses and thought by now I would feel that I wanted to use them, but seeing the result of the 4" FL, I haven’t found it necessary to swap out the lens.

Another reason I got spare lens holder tubes (that have cones and air inlet quick connects), however, was to have readily available different focal lengths that are very quick to swap if needed. I know for certain that a 2.5" FL is not so good for 1/2" or especially 3/4" cutting. But there may be times I want to really have fine detail engraving. That will be when I could use an even shorter FL (maybe 2" or 1").

And I also had mentioned that i recognize the air assist would be compromised, but some of that I may easily be able to compensate for. Hey - It’s all in the name of experimentation.

Here is some engraving with a 4" FL that really came out well. This type of work not needing extreme resolution (I hadn’t yet wiped off / polished the ghosting off, so don’t hold that against me): 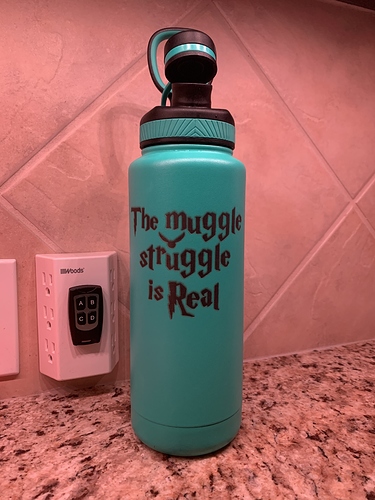 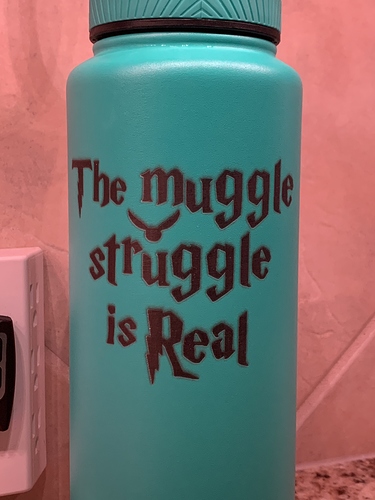 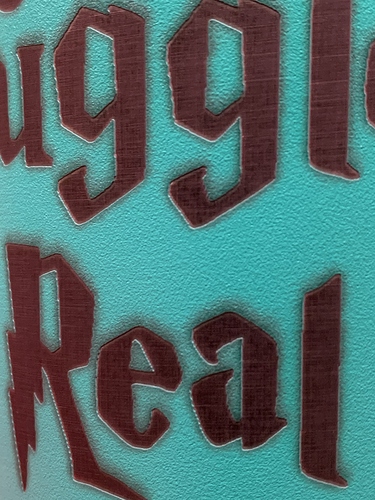