Lighburn unable to remove the backup file - error and clutter

Trying this again. I asked a few months ago with no responses. Was hoping a newer version of LB would address it, but no dice.

From my research, it looks like LB doesn’t play well with dropbox. My workflow is to do the graphics on one machine and engraving from another - so dropbox is my friend! However, it can get pretty cluttered - and I’ve had instances where I did open and engrave the wrong file because the “backup” was named so closely to the actual file.

Anyone figure out a way to prevent this from happening? Or know if a LB fix is in the works? It doesn’t happen with other programs, so there’s got to be some way to address it I’d think.

I’m not sure if it’s something I"m doing…it doesn’t happen all the time. But you can see that sometimes it is pretty pervasive 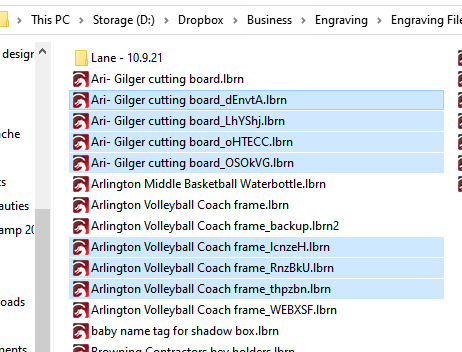 Thanks for your semi-helpful response.

In most places in the world, cloud based computing is pretty common. In my shop where I have 3 lasers and 3 machines running 3 instances of lightburn, it is a necessity.

The reason I posted here is because no other software I use has this issue with Dropbox. Not surprisingly, Dropbox feels that this isn’t their problem and it has to do with how the software is locking/backing up files.

My hope was that someone using lightburn had a workaround. There are a dozen reasons I could list as to why this is “production shop quality” software. But these extra files that would show up in a production shop using a cloud environment are a demerit.

If there is another forum you’d recommend, please let me know.

All of the files highlighted in blue have different names. Files uploaded to dropbox will not overwrite existing files unless they have the same name. Also, you can stop automatic saves by going to Lightburn preferences and set the auto update frequency to zero.

Thanks, Neal. I tried changing the automatic saves to zero. It still seems to have the problem.

It “seems” as though when Lightburn opens a file, it tacks the additional letters on the end as a temporary file. When I hit save, it saves to the original file correctly (not the one with the extra letters). But then it has trouble deleting the “temporary” file it was using with the extra letters.

Every time I reopen the original file and make changes, when I go to save it does the same thing. 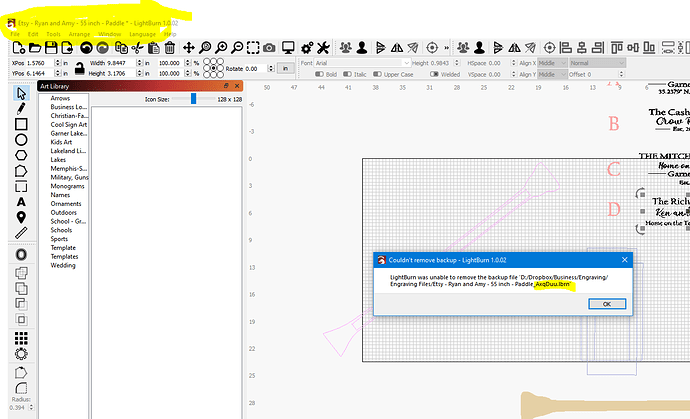 I don’t know how to write scripts. Could You send me yours? Or let me know what solution you use to keep files in sync for a shop with more than 3 lasers. I’m sure it would work for my small shop.

Maybe I should have been clearer in my first post…LightBurn software is creating the files. That why I posted it in the software section of the forum.

Congrats on living in the largest country. It’s on my list to visit.

Ralph, I may have to resort to what yiu are suggesting until there is a change in how LB works. I tried working in a folder that doesn’t sync to the cloud and the issue completely went away.

Extra steps to move the files around, but I think I’d take that over having the duplicate files.

This is not specific to Dropbox, I see the same happening here. No syncing running here, just an antivirus.

The underlying issue is how Windows works. Windows is an outlier in the operating system world in that it locks a file’s name, location and existence while any program accesses it. You can happily change and remove its content while someone is taking a peek, but no renaming or deleting. On Linux and OSX that’s no issue, someone else peeking into the file doesn’t do anything, you can still rename or delete it fine.

That means that the assumption that you can always rename/delete a file you just created is false on Windows (and only Windows). The technique of “write new file, rename old to backup, rename new to old” (that’s works so well everywhere else) is not commonly used on Windows. Instead “rename old to backup, write new as old” is used there.

Alternatively a retry can help. (Retries are always a good idea on Windows, there are so many things that can block your filesystem access…)

Not sure this is going to help but I use a WD My Cloud EX2 Ultra networked attached hard drive. It’s not exactly Dropbox but it’s on my network and is where I keep all my files including Lightburn.
I access this from my laptop which stays at the side of my Laser in the workshop and from my desktop which is in the house where I do my project designs…
For me there is no difference to accessing files on my PC or Laptop HDD and I don’t have the subscription charges that you have with Dropbox (if you are over the small amount of space which is free) which add up. I can access my files from anywhere including on my phone if I need to get to a file.
The drive is Raid 1 so if one of the HDD goes down I do not lose all my files.