I’ve a rotrics dexarm but don’t found it on lightburn software.
Witch machine I should select??

I hadn’t heard of this machine until yesterday, and we had two people ask at almost the same time. I would need to know what firmware the controller uses in order to make a recommendation, and that’s assuming that their controller accepts GCode that works with normal X/Y coordinates and deals with converting to whatever their angular movement system requires. I wouldn’t be surprised if they are doing that conversion in their own software.

I purchased a copy of Lightburn to use with my Dexarm as well. Some aspects work fine, but others seem to fail completely. Burning an image works fine, and it will do that without any issues, but if I try to add text, it will print the text stacked diagonally to the right, even cutting across the image. Text by itself also prints diagonally to the right. I don’t know if this issue is with Lightburn or the Dexarm.

When I have tried to set up camera alignment, it will only print the filled in parts of the alignment marker, which it also stacks diagonally to the right. If however I give it the image of those markers, it will print them without issue. Further, regarding the camera alignment, the moment I hit the “frame” button on camera alignment it sends the arm out and to the extreme right, causing it to hit it’s enclosure.

I don’t understand enough about this stuff to fully understand what is happening, but it’s weird to me that Lightburn and the Dexarm can communicate well enough to burn an image, but not communicate properly to burn anything else… I’m happy to help experiment with my Dexarm if it helps make the two more compatible. 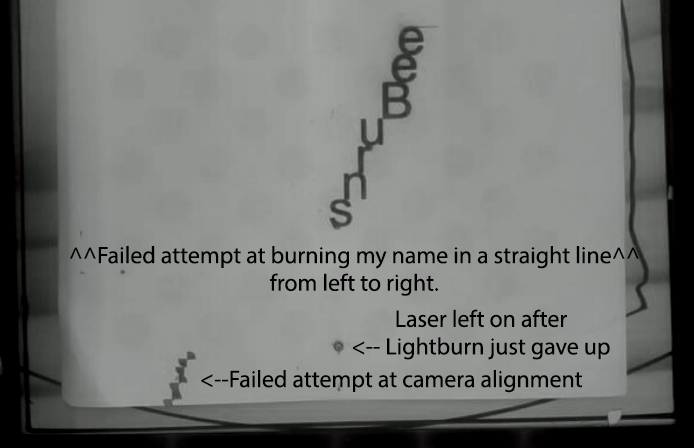 Has there been any work on getting this software to work with the dexarm? TiA!

None whatsoever. I don’t have the machine, or know anything about it. Unless Rotrics is willing to send us a unit to test / implement with, it’s not likely to happen. It’s a relatively low-volume, specialty machine, so the cost of purchasing one would likely exceed the number of licenses we’d sell to owners of that hardware. I would lobby Rotrics to work with us to add support for it.

@LightBurn Hmm… your software is often suggested in their group, so I imagine you’ve got a number of people that are interested in it. I bought it because of the suggestion of some in the group, and it works fine if I load an image. Which is why I bought it after trialing it. It wasn’t until I tried to calibrate a camera to it, and or use the text feature that it acts weird. My guess would be that it’s a non-cartiasian device, and your software just doesn’t seem to understand how to handle that properly, given that it otherwise works when just sending a basic image to the arm.

For instance if I send it an image of the calibration targets, placed exactly as they appear in the calibration process, it will print that image perfectly. However, if I just allow it to send whatever code it sends on it’s own during calibration, it just does them in a weird step trail, similar to how my name is above.

I’m happy to volunteer my device to test whatever code you might want to send me, and I can provide you with any feedback necessary. I also posted a link to this post in the Rotrics discord, to see if we can get the developers to help out too.