Hello - Complete newbie to lasers, LightBurn and this group. I have an xTool D1 10w laser and I’m having an issue with LightBurn completing cuts on even on simple things like rectangles. I sent my LightBurn test file to another D1 user and they are having the same problem. I made sure the firmware was update-to-date on my D1 and I also updated to the latest version of LightBurn today, but the issue still persists. I’m going to attempt to upload a few pics and a video (if it will allow), showing what is happening. Thoughts on whether this is some type of bug or a setting somewhere causing this? Thanks 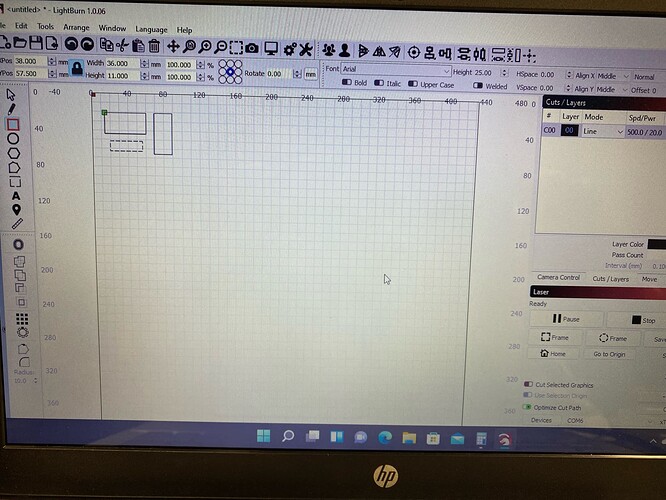 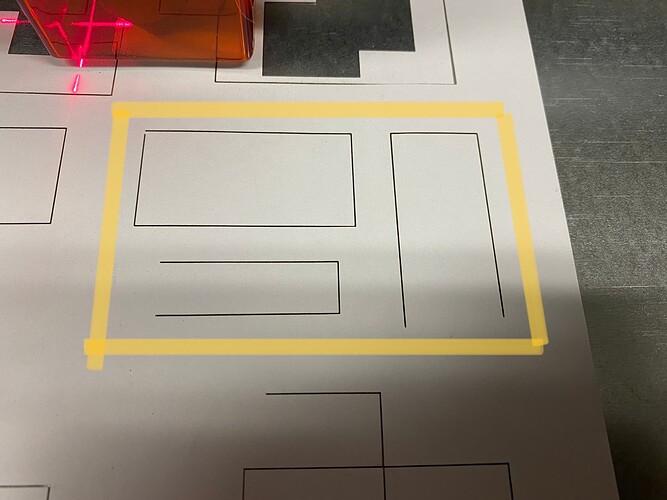 I can only catch part of your cut settings in the image provided, but I would suggest you drop your speed to something like 200 mm/m and up the power accordingly ( maybe start with 85%)

I sent my LightBurn test file to another D1 user and they are having the same problem.

Is the resulting burn exactly the same as what you’ve produced? Or just generally similar where the entire shape is not engraved?

Can you see the light physically on during the portions of the engraving where no marking is produced?

Does the job complete normally in LightBurn or is there an alarm or other critical failure where you need to power cycle or reset to recover?

There are plenty of people using LB with D1 so don’t think it’s something inherent in the combination.

Do you have any similar issues using LaserBox basic?

Thanks for the reply.
It’s not always the same. In LightBurn you can see the laser is at a reduced level and “zips” right over the areas it doesn’t cut, like it “thinks” it shouldn’t. No errors either in LightBurn. I just tried three rectangles in LaserBox Basic, and they all cut except the top left corners. It makes me think there’s a problem with my D1, but the fact that I sent the saved LightBurn file to another D1 user who wasn’t having any issues could then duplicate what I’m seeing, really has me confused on where the problem truly is. 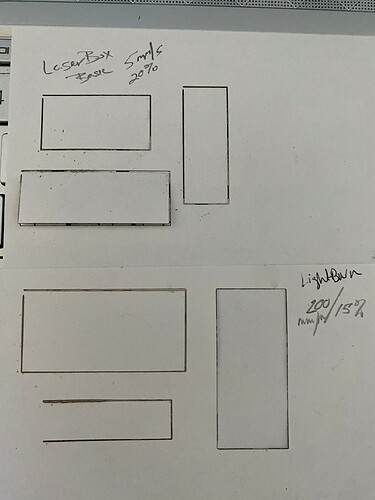 Are you saying the laser head movement actually speeds up during the unburned portions?

they all cut except the top left corners

Sounds like you have a mechanical issue in addition to potentially any other issue. Check your belts for proper tension. Also, make sure your pulleys are properly secured to the stepper motors. They may be slipping or the grub screw is not secured.

It’s possible that you’re at the low end of power that you can control reliably at that speed. If enabling “Constant Power Mode” or increasing power levels resolves the issue then this is the likely cause. It may just be that your laser doesn’t perform well at that threshold. Your laserbox settings were both faster and higher power levels than what you did in LightBurn. To do an equivalent test in LightBurn set speed to 300 mm/min and 20% power.

Yes, it actually speeds up over the areas not cut.

Odd. Can you upload your .lbrn file as well as the gcode generated from that .lbrn file? Make the extension of the gcode .txt so that the forum will accept the file. The button to save gcode is found in the Laser window.

I don’t see anything unusual in the gcode. My suggestion is to try higher power and/or speed to see if you can get the symptom to go away.

If the head is actually moving faster than normal during those spots I suspect an issue with the firmware in the D1. Are you on the most current firmware? I know that xTool has been improving things steadily. They had some hiccups early on.

Yes, I upgraded to the latest firmware yesterday in an attempt to resolve the issue. I have opened a support ticket with XTool, so I’m hoping they are able to assist. Thanks 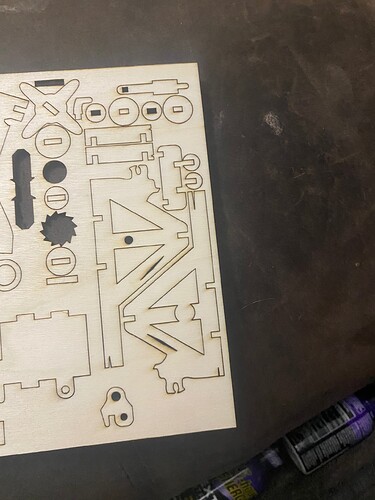 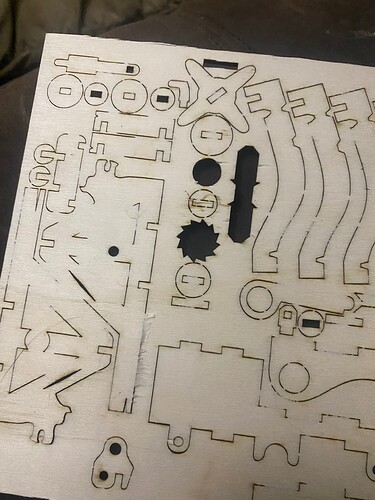