I’m new to Laser Engraving as well as Lightburn. I purchased a Sculpfun S9 and noticed that there is a noticeable offset in fills, where forward lines are shifted against backward lines. The offset disappears when engraving with bi-directional turned off, but of course this takes longer. The text shown in the comparison is a little over 1 mm in height. On larger text (as in the 5 mm example) the shifting leads to a minor blurriness.

I assume the shifting is caused by play in either the (rather tight) belt, the gear or the stepper motor.

Question is how this can be fixed? Is there a setting in Lightburn to compensate the play, so that forward and backward lines align? 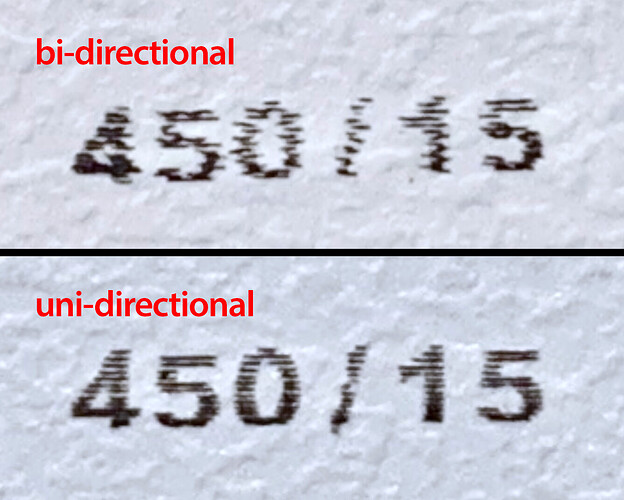 There is a specific feature in LB to correct for this in software called offset scanning adjustment.

However, I suggest you first focus on any mechanical issues before trying to resolve in software.

Thanks for the swift reply. The offset is approx. 0.2 mm. I wonder if such an accuracy can even be achieved with such a cheap, belt driven engraver, or whether I’m just expecting too much.

Most typical setups should be able to get you accuracy into the hundredths of millimeters notwithstanding other tolerances.

In any case I don’t see any reason why you couldn’t dramatically improve your current burn quality.

Also, make sure you’re not overtensioning belts either. You want no slack and belts taught… but not stretched.

Essentially you’re looking to remove as much backlash out of the system as possible.

How can I figure out whether it is a mechanical/backlash issue, or a timing issue firing the laser, as described in your linked Scanning Offset Adjustment instructions? I mean there is no obvious play as one could identify when moving e.g. two gears. It’s so minimal it’s extremely identify just from moving parts.

It’s the interaction between components where you’ll get your losses.

Once you’re relatively confident you’ve gone through the mechanism to reduce this then move on to the software adjustment.