Camera support on linux seems to be intermittent. I regularly get a streaked image like the following: 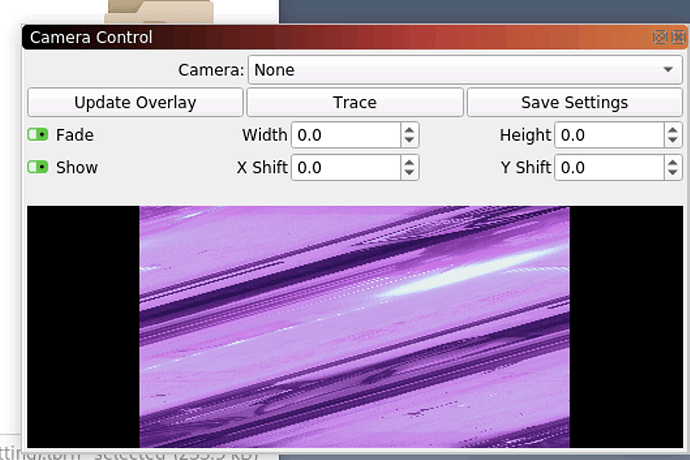 I can see movement in the image (it’s not static). Also, curiously, ‘update overlay’ always seems to correctly capture the input from the camera. I don’t know why the camera is listed as ‘None’ (the popup has no other entries in it). That seems to be a random error as well.

Randomly, the camera display appears correct, although when it does I get a very slow frame rate. Much slower than I got on the windows version of lightburn on the same camera.

‘Cheese’ correctly shows input from the camera, so I don’t think the problem is the camera or linux specifically, and the fact that the ‘update overlay’ works again suggests that it’s not linux.

On my iMac with OSX Catalina, (which is based on Linux) I had a problem with the camera seeing the honeycomb bed area, and the pattern confused the camera. I used painters paper to mask off the bed, and it worked.

It’s not that it can’t see it, but rather that the image is all streaked.
Yet somehow, the image overlay works.

It appears that the problem can sometimes be fixed by selecting “None” for the camera, and then reselecting the camera.

The framerate is still slow.
And sometimes when you select ‘None’, the camera doesn’t then appear in the popup. But it sometimes helps.

It looks like it’s reading the source dimensions info wrong and shifting on each row because it has the width value wrong.
Recent versions of Linux seem to have incompatible gstreamer versions which is likely the issue. We are actively looking at building against newer qt and on newer Linux to alleviate that issue but it will require dropping support for older Linux.

We support Ubuntu 16+ and Fedora 28+ and anything else can very much be a your mileage may vary situation. And gstreamer is 100% the biggest problem for other versions. Even Ubuntu 20 seems to have problems with some cameras.

Unfortunately I can’t provide much of a direct solution other than seeing if it works on Ubuntu 16 or 18 which would help confirm my suspicions.

As before, if I switch the camera to None and then switch it back (assuming Lightburn allows me to do so) the problem usually resolves.

I’ve seen initialization issues too but it seems to happen more with the builtin camera than the USB camera I’ve used. Switching to none and back is no problem for me.