Mac 1.0 with viewing and performance issues?

We’ve got a group of 8 laser decks (mostly Boss Lasers) and 5 licenses for Lightburn - ranging from cutting polyprop, acrylic, wood, metal, and foam to etching all the above. Several years of use on the windows side, but just set up a license on our primary graphics system (Mac OSX 10.13.6 on a 12core Mac Pro).

Primary production system is another 12core Mac Pro running Winblows 10 (native Win10 install, NOT an emulation). So in essence this is almost identical hardware on both systems.

The quality and performance difference going from the Windows side to the Mac version is… highly disappointing, to say the least.

Please remember that BOTH towers are 12 core Mac Pro towers with 8gb performant video cards - one is simply running native win10 and the other is running Mac OSX 10.13, so this is almost as close an “apples-to-apples” comparison of the two versions as can be had… Both systems have 64GB ram, both run on PCIe buss SSD drives, both are relatively very performant.

Secondly, when we use the Array tool to create an array, it does not display well. see photo below. for example, iteration #1 is perfectly visible. all further iterations (2~60 ish) appear in a ‘sketchy’ visual, but when you zoom in to inspect, they disappear.

Additional attempts to zoom in & out MAY get the iterations to render, but all are quite digitized on the screen and incomplete. 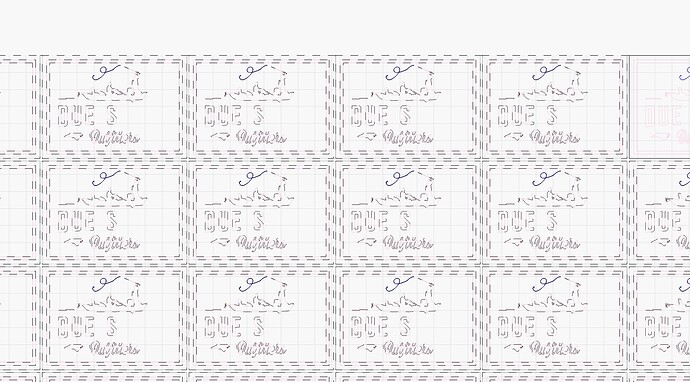 Furthermore, even IF you can view the pieces, they cannot be selected (using either the select tool or by highlighting). they simply are NOT selectable.

Furthermore, if one zooms out (after creating such an array) and does a “select all” (ie., ⌘ + a ), the ONLY unit which is actually selected is the original iteration.

The unit DOES seem to communicate without issues to our decks (we really only use the Mac version with the Boss decks, so I can’t advise as to the others), and the config & settings do seem to translate consistently between the Mac and PC files (files are stored on a network drive and may be accessed by production systems on Mac or Win10)… [I should add that we only use networking to drive decks, so i have no feedback as to USB]

Very painfully slow (even on 8gb video cards).
Highlighting is even slower.

Is this common? (please bear in mind that the same Mac system is used in production environments where we regularly handle 300 dpi tiff or jpg files in excess of 1x15 yards ( more than 15 square meters), and there is little/no lag in screen play.

Another issue of note is that it seems challenging to get the Mac version to show fill on the screen (for example if one is running a fill on the Win versions it seems to be consistently displayed even in the working layer).

Would it be possible to get some feedback on these issues? While it is appreciated that you’re entering the Mac world, this seems to be rather sub-optimal, and is certainly not production-ready from my perspective.

You are using the new optional virtual array introduced in V1.0 and the appearance and selection differences are expected and deliberate. Deselect ‘Create Virtual Array’ when you create the array to get an array that is the same as you are used to. At the moment you are comparing a virtual array (which happens to be on a Mac) to the old style array (which happens to be on a PC).

As the virtual array is ‘live’ and follows any changes to the original master item, then one would expect it to be slower to display and preview. This is nothing to do with Mac vs PC. 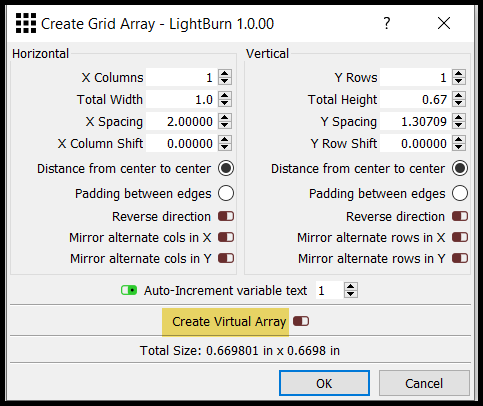 ah!!!
many thanks…
yup, that did it! I’m a bit lost as to how that ‘feature’ would be useful (especially considering how it absolutely buries the performance!)…

one more question - am I missing something about UNDO (ie., ⌘ + z )?
on the win side, undo seems almost unlimited.

I suspect for your usage the virtual array might not seem immediately useful, but for other uses where an array is used to form multiple elements of a design on a single object (as opposed to your application where the same final design is repeated multiple times for multiple identical objects) then the ability to tweak a single iteration and automagically have those tweaks propagate to all the other copies is really useful!

Even for your multiple object use if only one component - say a customer name - varies from run to run, it could be useful to be able to just change that in one place. Running 60 up of anything at one time is outside my usage so I understand that your priorities would be different.

I’m not sure what you mean when you ask about undo. I use Macs exclusively and ⌘ + z seems to work fine. Does it behave differently on a PC?

thx for the note and thoughts. yes, serialized iterations can be very useful…

perhaps the undo was tied to the virtual array for my use? i don’t know… will check.