I’m trying to enter my machine settings (per the Ruida controller) into LB, for accurate job time estimation. I have a couple of questions on the field labeling in LB, vs the appropriate/equivalent Ruida label.

LB has a field for “corner accuracy” - can you tell me the Ruida equivalent of this name?
Minimum Corner Speed - same?

I’ve included screen shots of the Ruida settings, so the Ruida names on my particular controller can be seen. Thanks! 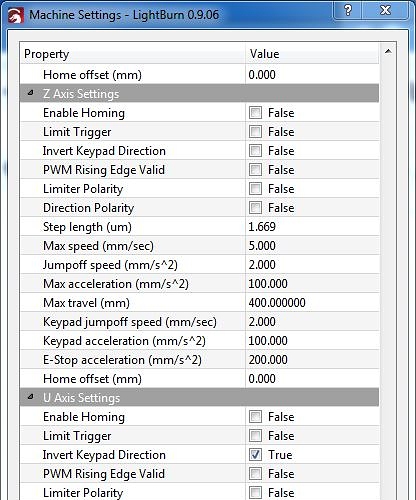 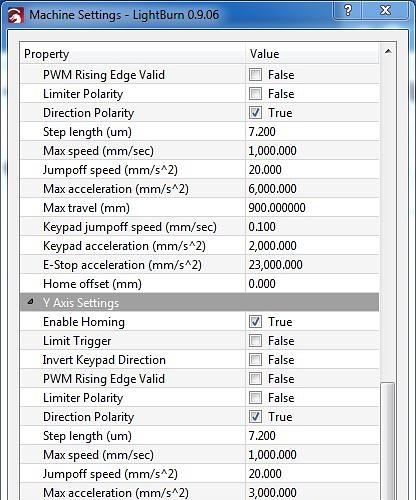 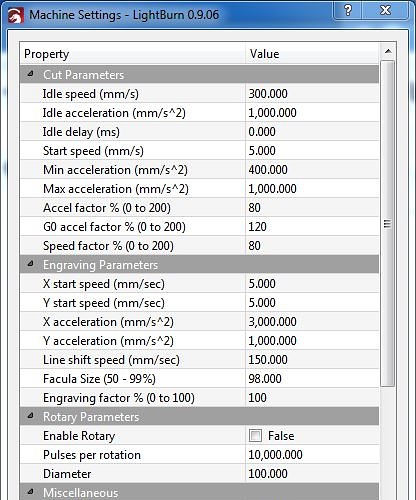 I don’t know if that has an equivalent on the Ruida, but it shouldn’t have a dramatic impact on the time unless you make the value very small or very large.

The number as an allowance for how far away from a corner the motion profile is allowed to stray. If the value is zero, and the minimum or corner speed is also zero, the motion planner would have to stop completely to make a corner. If it’s allowed to cut the corner, even a tiny amount, it doesn’t have to slow to a full stop, much like a race car, starting wide, cutting to the inside, and finishing wide again on a tight curve.

I suspect the Ruida has such a thing, but hidden from you.

Ok, so it’s the settings for path following? And in LB, you can choose to deviate either distance, or speed?

One thing I always disliked about Mach3 controller on my plasma was it’s path following. It would always sacrifice path following to maintain cut speed. This lead to rounded corners, etc. I had to place cut rules in Sheetcam (my CAM software) to slow it down on the corners.

My CommandCNC controller, however (a derivative of LinuxCNC) does the opposite…it sacrifices speed, to keep the path accurage. It was a big jump watching the torch head movement, going from Mach3 to CommandCNC. Mach always keep a relatively smooth, fast movement. The Linux controller, however, made the torch look “jerky”, as it was speeding up and slowing down! I’m used to it now, however, and have the benefit of accurately cut parts.

The Mach3 path following isn’t a big deal on routers, as they’re typically moving much slower than plasma (350 ipm on some materials).

Ultimately, I’m just looking for accurate cut time estimates. I’ve played with the variables until the projected cut time matches the actual cut time displayed on the machine. I’ll cut several more files, and see if it stays accurate. I may be tinkering with the wrong variables.