Messed up my laser, now its too stron or just the direction changes get marked

Hi,
I’m troubleshooting my setup. It’s a NEJE Master 2 GRBL laser cutter. First, it worked ok, even though I had some sort of a grid lasered to the object. The grid is set 90° to the laser line and looks as if it’s the laser gets turned on and off during filling out a solid black background. But it was ok, the result looked good enough for me.
Now, since I moved the laser to the outside I tried to set up an OctaPrint Server on a PI to send g-code to it. Somehow it sadly did not work out. When I tried to laser something with the LightBurn software the next time I had to realize that the Laser now is super strong and just burns trow my material, even though I did not change anything. More power, why not. But now the real problem is when I reduce the power, the only thing getting black is where the laser change direction, but in between its withe, even though it should be solid. In the picture, you can see a test stripe with different settings. 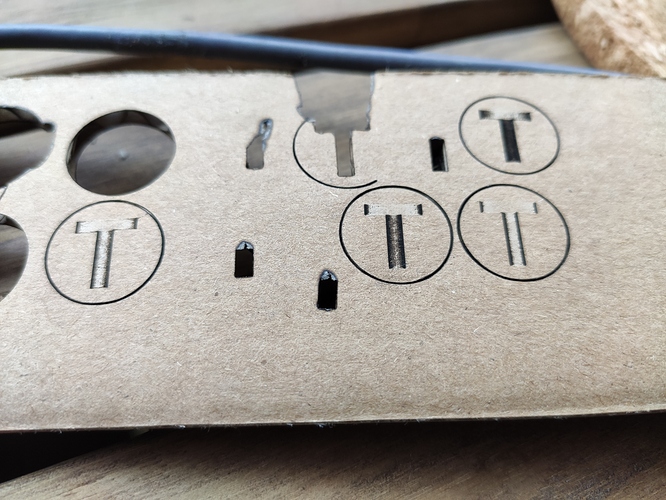 Hi. You have to check $30 (max spindle) and $31 (min spindle) parameters.
$30 is used on fast part of burning (like horizontal lines on T letters on your pictures) and $31 on slow parts of burning (on edges, changing directions, etc).
For example, if you want to burn a straight line, CNC first accelerate to its burning speed, than burn with burning speed and at the end of line it starts decelerate to zero.
With M4 G-Code command CNC calculate the laser power not to over burn at start and end of burning line because of slower speed.
Hope this helps.
Br,
Andreo