Missing many lines (objects) after reopening project file - lines are still there but "invisible" :-(

Hi everyone,
after reoping my last project, I am missing many objects. Before saving the project and turning of my computer everything was fine. But after reopening my file, it seems to be defect.

First I thought maybe I have deleted all the missing objects by mistake, but after marking the area where the objects have been before, there are still “invisible” objects. It is still possible to change them from layer C00 to another layer (just for checking), but the objects remain invisible.
I’ve found no way to get them back.

After turning “debug drawing” mode on, the missing objects are visible again, but only in this mode and without any chance for putting them to laser output. 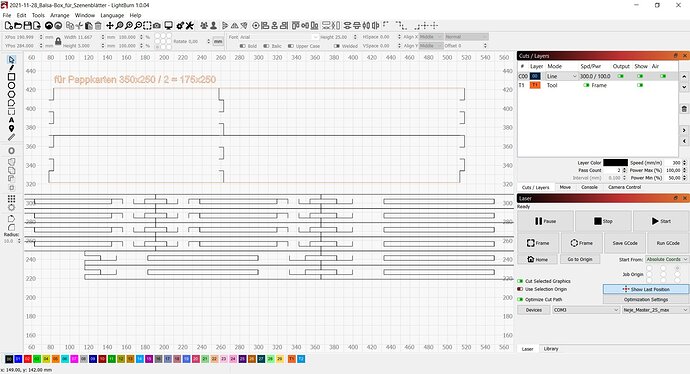 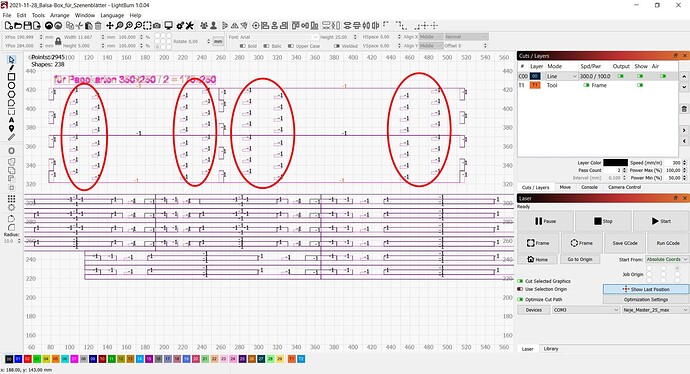 What can I do to restore my project data?

I have searched this forum and internet for similar errors with LightBurn, but I couldn’t find something similar.

Many thanks for your help,
Nig

There are many here that can help, but your project file would be of great assistance as the problem should go with it…

Thank you - yes of course. I’ve attached my project file in my first post.

There is something broken in this file - I’ll see if I can figure out why.

Is this the reason for the ‘drawing debug’ option? Never used it, but now I am curious.

Thanks for hopping in.

This is a bug in the LBRN2 file format loader - I’ve fixed the bug, corrected your file, and re-saved as LBRN format so you can keep working. This fix will be in the next release, and we’ll be trying to get this out quickly.

What’s triggering the bug? Something easy to avoid until the patch is released?

If you use the LBRN file format, it doesn’t use vertex / primitive list sharing, and that’s the source.

Basically if you have shapes where the vertex list is the same, but the way they’re connected together (the prims) is different, you’ll trigger this. I’m honestly stunned we never hit this before - this code is 10 months old.

Many thanks for your very quick response and your perfect help!

Sorry but I doesn’t understand, how I can avoid another broken file.
Would there be something I shouldn’t or should do? Should I use lbrn file format instead of lbrn2?

I’ve fixed the bug, so we’re going to release a patch version immediately with this fix. I basically pulled the code from the point where we released version 1.0.04, fixed that, and will be releasing that as 1.0.05 for now. We’re not ready to do a “real” release yet, but I want this out as quickly as possible to prevent anyone else from losing work.