Is there an upgrade possible to the controller board, I don’t know why, but I cannot get any current to flow even though the laser Spot function is working. I believe it is because I don’t have Lightburn working correctly yet, but hear that Lightburn does not support the Nano card which I can see in the frame.

Lightburn does not work with the M2 Nano. It will work with an Arduino Nano running GRBL firmware. Which do you have? I would assume your machine has the M2 Nano because that is the most common controller in those machines.

As far as upgrading the control board, the Cohesion3D Laser Board is one option. It is a drop in replacement for the K40 machines.

I have a couple Arduino boards laying around, but I don’t have stepper driver shields for them atm. Then I would not also know what to do with the software that is apparently burned into the Nano. … unless GRBL handles all that. I have just ordered the Cohesion board, I hope I will not be sorry.

Thanks for the quick reply, I will update after I install the new board. Too bad I just can’t replace the Arduino…

I wasn’t telling you use an arduino, I wanted you to clarify which board you were trying to use with lightburn.

Too bad I just can’t replace the Arduino…

I understand. the software does not work with the Nano. I have ordered the recommended upgrade board today. I just wasn’t sure if the GRBL is the main brain or if there was proprietary software on the nano in the laser now.

You’ve ordered a replacement board so it doesn’t really matter at this point but I don’t want anyone reading this later to be confused.

The M2 Nano that comes with the K40 has nothing to do with Arduino Nano. Different hardware and different firmware. GRBL cannot run on the M2 Nano.

I just wasn’t sure if the GRBL is the main brain or if there was proprietary software on the nano in the laser now.

I am sorry I confused the issue by bringing up Arduino but your original message was unclear. I read it as you had partial functionality in LightBurn which definitely can’t happen with the stock M2 Nano board.

I received the new card, but had so many problems with the laser in addition:

I had several problems with the equipment:
1. the laser was not putting out any power, the instructions were not clear concerning the display and adjustment for current.
The LED indicators are marked in percent of power, not current. So the meaning was unclear, pressing the button in one mode
gave no reading, pressing the button again gave a reading that could be adjusted.

I still can’t burn through 3/32 plywood, I suspect the focus is not exactly right, I did some test rectangles
to prove or disprove that, I am just not certain of what it shows. 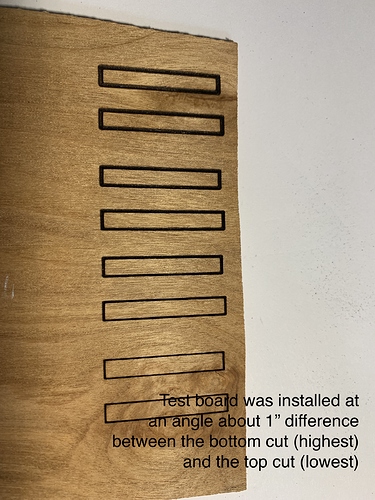 Hi…I have my MPCNC with a needle cutter for foam and 3w laser for light duty stuff…but I’ve really be considering picking up a K40 for some heavier engraving/cutting. The price on them has come down so low it’s hard to say no…but it looks like the newer 50w models are <$2k now and have better controllers, ship with air assist, and have a better controller.