It’s been a while since I used my diode laser (Ortur Laser Master) and I was doing some tests on some painted aluminium using lightburn and I couldn’t get it to engrave.
It was firing but not marking.
So…I went back to Laser GRBL and it engraved.
Back to Lightburn to play with the power and speed settings and I found it engraved fine on 1000mm/m @ 50% but didn’t mark at all set on 1000mm/m @ 80%
At 50% there was a noticeable increase in power compared to 80% as it engraved.

After some head scratching, I decided to try a test grid and it seems the power drops off at 30%, 60% and 80%.
I did this on an aluminium litho plate (left) and the painted aluminium (right).

Being pretty much a noob, I’m not sure if I’m doing something wrong or if I have a hardware or software issue? 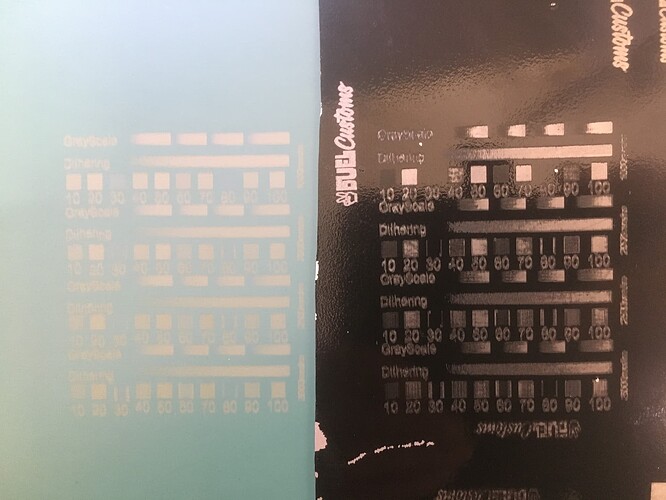 Welcome on board… I hope we can help you out…

Did you set it up using Lightburn Grbl setup as a guide?

I don’t know of a guide that’s specifically for Ortur products … doesn’t mean there isn’t one.

One of the problems that arise and is missed is the setting of the $30 register and the S-Value max setting in the Device settings they must be the same.

This is in the quick settings of the grbl setup…

Thanks for replying to me.
I’ve been pouring over the internet and searching for an explanation on Ortur groups along with this place.
I can’t quite remember how I set it up as that was a while ago but I had found something about the S-value and $30 register so I checked out a video from Lightburn about getting started so I deleted my prefs folder and went to the “Devices” button on the Lightburn UI.
It didn’t find my device as such but there was an “Ortur” in the devices window already.
Whilst replying to you, I went back and tried it again but this time it did detect my laser in the set up window as per the sceengrab.
I have a funny feeling that you’re on the money with this one so if it doesn’t fix it, I hope I’m on the path to getting there. 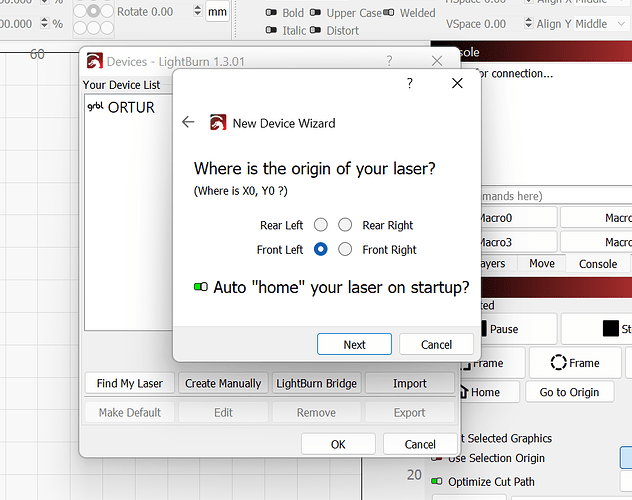